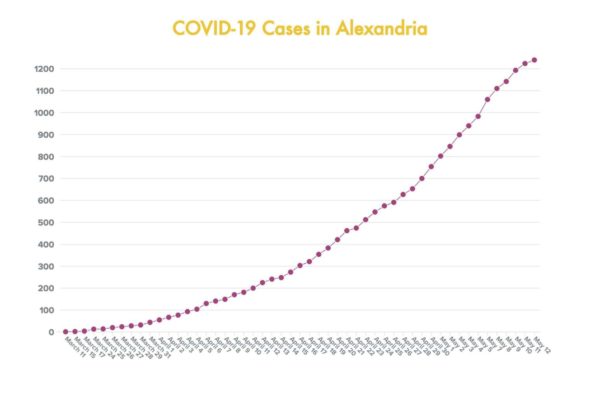 There are now 1,240 cases of COVID-19 in Alexandria, an increase of 16 new or probable case since yesterday.

No new deaths have been announced and there have been 30 fatalities due to the virus in the city. Additionally, the city’s Hispanic population leads with positive cases at 553 and four reported deaths.

The most recent fatality was a woman in her 70s, whose death was announced Saturday, May 9, by the Virginia Department of Health.

There are more than 400 new or probable cases in the city in the month of May alone. VDH also reported that there are 145 COVID-19-related hospitalizations in Alexandria, and that there have been 93 cases associated with 11 outbreaks in the city, and that 90 of those cases have been health care workers.

It is not clear how many people have recovered from the virus, and an accurate count on the number of cases is difficult to maintain in Alexandria since the highest infection rates are in the city’s poorest areas.

The area of the city with the leading number of cases is the 22305 ZIP code, which includes the Arlandria, Potomac Yard and Potomac West neighborhoods, had the largest number of reported cases at 370 (10 more cases since yesterday), with an estimated population of 16,095 residents.

Statewide, there have been 891 reported deaths, which is an increase of 41 deaths since yesterday, and 864 of those deaths are confirmed to have been COVID-19-related, according to VDH. There are now 25,800 cases (24,601 confirmed, 1,199 probable) and 3,395 hospitalizations (including 22 probable cases). Additionally, 171,239 tests have been administered in Virginia.

The following ZIP Code Data includes areas that share jurisdictions between Alexandria and Arlington and Fairfax Counties, and was updated on Sunday: