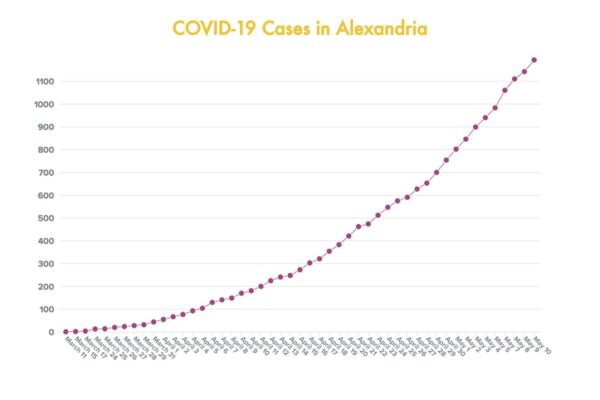 There are now 1,193 cases of COVID-19 in Alexandria, an increase of 51 new or probable case since yesterday.

No new deaths have been announced and there have been 30 fatalities due to the virus in the city. Additionally, the city’s Hispanic population now leads with positive cases at 515 and four reported deaths.

The most recent fatality was a woman in her 70s, whose death was announced yesterday by the Virginia Department of Health.

There are nearly 400 new or probable cases in the city in the month of May alone. VDH also reported that there are 139 COVID-19-related hospitalizations in Alexandria.

For the second straight day, the area of the city with the leading number of cases is in the 22305 ZIP code, with 20 new cases since yesterday. The ZIP code, which includes the Arlandria, Potomac Yard and Potomac West neighborhoods, now has the largest number of reported cases at 360, with an estimated population of 16,095 residents.

There were also only 27 news test results from 22305 since yesterday, and local groups are demanding that Virginia Governor Ralph Northam authorize supplying 10,000 testing kits to the Arlandria area, and providing housing for poor COVID-positive patients living in jam-packed housing.

The ZIP code with the second highest number of infections is 22304, with 14 new cases since yesterday. That area, which includes Landmark, the Duke Street corridor and the Cameron Station community now has 341 cases out of an estimated population of 54,003, and has 14 new cases with 59 new test results.

People under the age of 50 have been getting infected at a steady rate, while there were relatively few numbers of new cases for residents above the age of 70. A large percentage of deaths have occurred at long-term care facilities, and there has been one death of a person in their 20s. There have been 13 reported deaths of residents in their 80s.

Statewide, there have been 839 reported deaths, which is an increase of 12 deaths since yesterday, and 813 of those deaths are confirmed to have been COVID-19-related, according to VDH. There are now 24,081 cases (22,962 confirmed, 1,119 probable) and 3,211 hospitalizations (including 21 probable cases). Additionally, 157,957 tests have been administered in Virginia.