There are big changes afoot around Alexandria in the week ahead of the city’s big Scottish Christmas Walk.

Behind the scenes, there are also some improvements on the way to city infrastructure. A new zoning change could help make better use of transit funding set aside by new development, and some flood improvements are underway in Del Ray.

With redevelopment on the horizon, Wheel Nuts Bike Shop (302 Montgomery Street) owner Ron Taylor said it’s time to close up shop and ride into the sunset — specifically to West Virginia.

The store is in the middle of the Montgomery Center, which developer Carr Companies is in the process of redeveloping. Taylor said the writing had been on the wall for a while.

“We were given significant advance notice that the building was being sold,” Taylor said. “My lease happens to run out in December. Demolition of the building is slated for maybe the end of the second quarter of next year, [around] June to October. At that point, all tenants will need to vacate.”

Taylor said he knew the development was coming sooner or later.

“There’s never any question that the Montgomery center will not be developed, we all knew that they had plans for the building,” Taylor said.

Wheel Nuts has been a fixture for local cyclists for over twenty years, with a location easily accessible from the Alexandria portion of the Mount Vernon trail. The business’ website said the shop opened in 1999, but by Taylor’s count it’s been around 25 years.

“We’ve been in business 25 years,” Taylor said. “It’s bittersweet. I’m the owner of the shop — my wife and I own the shop, and my wife just retired from the Fairfax County Park Authority, so it’s nice that we were able to tie it in with when she retired.”

Taylor said since announcing the store’s closure, he’s gotten a flurry of emails and texts and phone calls both from past customers and neighbors sharing just how important the shop was to them.

Taylor said he’s looking forward to new adventures when the pair move to a new home in West Virginia.

“We’re both into the outdoors and looking forward to mountain biking and skiing,” Taylor said. “We plan to do a lot of traveling and we’re excited to visit national parks, and do biking: we want to practice what we’ve been preaching for many years.”

If you saw workers in bright vests around Del Ray last month, they were engineers contracted with the city, and their presence marked the start of design work for a major stormwater capacity project.

The goal is to boost the size of the stormwater sewer pipes in Del Ray, meaning that the pipes can hold more water and it will take longer for them to flood.

In the Four Mile Run watershed, the two top priority projects Commonwealth Avenue & E. Glebe Road project and E. Glebe Road and Ashby project are being combined under one large capacity project because they are located next to one another. This project is expected to increase the capacity, or size, of the stormwater sewer pipes; create opportunities for stormwater to be stored and released slowly over time; and incorporate ‘green infrastructure’ practices, such as permeable pavement, that allow the stormwater to soak into the ground, reducing runoff.

A contract was awarded for the project design in October. A city newsletter called Flood Action Alexandria said the project made headway last month as engineers conducted a site visit as part of the initial design work.

“The site visit will be followed by other preliminary work, including land surveys, geotechnical boring investigations and detailed sewer shed modeling,” the newsletter said. “This supports the development of construction plans for the proposed solution.”

When completed, the project should improve stormwater conveyance and reduce some of the flooding that has plagued Del Ray in recent years.

“The combined projects are the City’s top two large capacity projects and will increase the capacity of the storm sewer system to improve stormwater conveyance,” the newsletter said. “The project will also incorporate green infrastructure elements, which will capture runoff carrying surface pollutants, providing a water quality benefit to the watershed.”

The estimated cost for the design and construction of the project is $50 million, paid for in part by a grant from the Virginia Community Flood Preparedness Fund. 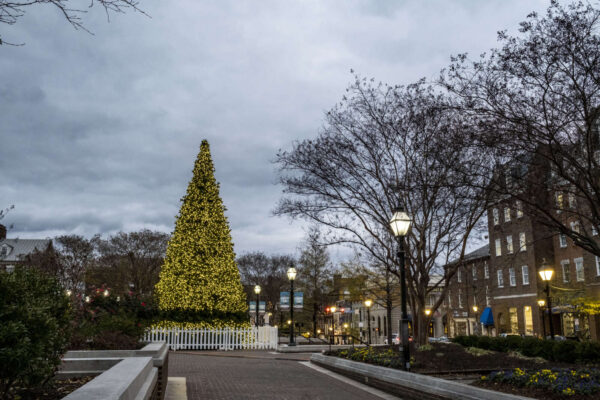 A 31-year-old Maryland man is being held without bond for allegedly robbing a 28-year-old woman in the Landmark area on Saturday night (Nov. 26).

Police said that the incident was domestic, and that it occurred at around 9:15 p.m. in the 5700 block of Dow Avenue.

A personal item was stolen from the victim, who was not injured, police said. The suspect was arrested a short time later and charged with domestic assault and battery and robbery from a person.

Alexandria’s revenue tax is growing, but too sluggishly to keep pace with the expenditures — leading to a $17 million shortfall as the city heads into budget season.

That estimate, from Mayor Justin Wilson’s monthly newsletter, is slightly lower than the estimate from a City Council meeting in November, but still presents a substantial challenge for city leadership attempting hold off on a tax rate increase.

Wilson said Alexandria’s budget is built around real estate taxes, which are growing but with some worrying signs.

“In Virginia, the structure of municipal finance is heavily reliant on real estate taxes,” Wilson wrote. “Consequentially, in Alexandria the real estate market, both residential and commercial, dictates our budgetary fate. Last year, we saw the healthiest growth in our real estate tax base in over 15 years. Yet, in the past year, mortgage rates have more than doubled. It’s hard to imagine that such an increase will not eventually impact our real estate market.”

Real estate tax revenue is projected to increase by 1.2% — which Wilson called a “return to the anemic growth that characterized much of the last decade and a half.”

Wilson said residential taxpayers are already paying more due to appreciation in the residential tax base, and adding a tax rate increase on top of that would add an even greater burden to local residents.

“I believe we should again work to avoid a rate increase while protecting the core services our residents depend on,” Wilson wrote. “Last year was the 6th budget in a row without a tax rate increase and I am hopeful we can continue that pattern.”

And yet, the city will have to find a way to close the $16.1 million shortfall. That shortfall is mostly attributed to an increase in city operations, the annual transfer to Alexandria City Public Schools and city debt service.

“With these revenue estimates and expenditure estimates, this brings us to a projected revenue shortfall of $16.1 million,” Wilson wrote. “Given that our local budget must be balanced, that shortfall must be resolved with either spending reductions, tax increases or some combination of the two.”

City Manager Jim Parajon, who warned City Council last month that “the budget is going to be tight,” is scheduled to present a budget to Council on Feb. 28.

With the holiday season approaching, a prerequisite for some family gatherings could be a negative Covid test. With Curative shutting down its testing kiosks throughout the region that might get slightly harder, but there are other resources.

The kiosks have provided around 195,000 Covid tests, the City of Alexandria said in a release, but demand for kiosk testing has dropped off dramatically since 2021.

“As of December 26, 2022, the private company Curative has chosen to close its Alexandria COVID-19 testing kiosks city-wide,” the City of Alexandria said. “Curative is closing all testing sites throughout the region before the end of the year.”

The postal service had previously offered free rapid home antigen tests, but those were suspended in September.

Several medical facilities offer testing, but require seeing a doctor for testing and can cost between $50 up to $300.

The most affordable way to get testing kits in Alexandria is from the library. Alexandria libraries carry rapid COVID-19 test kits available on a first-come, first-served basis. There is a limit of seven kits per person, and the city advised locals to call the library branch to check availability.

Those phone numbers and addresses are:

Alexandria Delegate Elizabeth Bennett-Parker is running for reelection for Virginia’s 45th District, she announced on Wednesday.

Bennett-Parker will kick off her campaign formally on Jan. 7.

“It’s been an honor to serve the people of Alexandria and I’m going to work hard for them this session and in the future,” Bennett-Parker told ALXnow. “Among other items, I’m working on bills to increase access to mental health services, enhance gun safety, improve voting access for individuals with disabilities, prevent evictions, protect consumers from deceptive practices, address inland flooding, and support working families.”

Bennett-Parker won her seat in November 2021 by defeating Republican Justin “J.D.” Maddox in the general election and incumbent Democrat Mark Levine in the June primary. She began her political career four years ago when she was elected Alexandria’s vice mayorship in her first-ever campaign for office.

Bennett-Parker is now a substitute teacher for Alexandria City Public Schools and is a former co-leader of Together We Bake, a non-profit job training and personal development program for underserved women.

In her announcement, Bennett-Parker listed a number of endorsements, which are listed below.

Inquisitive cat Loki is up for adoption in Alexandria.

“Loki is the ultimate lapcat, and even in his current office environment, you can still generally find him on a staff lap in front of the computer,” Hardter said. “Loki’s also an inquisitive gent, who likes to know what’s going on in the world around him, whether it’s watching visitors at the door or checking out the birds through the window.”

Learn more about Loki by going to AlexandriaAnimals.org/Adopt-By-Appointment or calling 703-746-4774.