Two more people have died of COVID-119 in Alexandria, bringing the death toll to six, according to the city’s daily announcement.

There are also 26 new positive cases of the virus in the city, bringing the total to 273 cases (including the fatalities). There have been 229 new cases in April alone.

The first death was reported on April 6, followed by the second fatality on April 13, and the third and fourth fatalities on April 14.

Alexandria’s DASH bus system also announced on April 13 that one of its drivers tested positive for COVID-19.

“On April 13, a DASH bus operator tested positive for COVID-19,” DASH announced. “The operator is currently recovering at home and exhibiting only mild symptoms. The operator did not work on the day they began experiencing symptoms, or for the two days prior. This is the range tracked by the CDC to investigate potential spread. At this time, there is no reason to suspect the operator had contact with any other DASH employees or passengers.”

Statewide, there are 6,500 cases and there have been 195 deaths, according to the Virginia Department of Health.

One of the deaths was 52-year-old Brian Miller, who was memorialized in a remarkable profile in the Washington Post.

‪I was saddened to learn that C-19 has claimed the life of a great Alexandria leader, Dr. Brian Miller.‬‪I had the…

The Alexandria Health Department would not release any information on the fatalities, and said that there was not a public health need to do so. Close contacts of the fatalities are being contacted by department personnel, including at high-risk settings such as nursing homes, assisted living facilities and health care centers — although the city provided no specific details on which of these was contacted.

The city said that the recent rise in positive cases is likely “due to a combination of additional testing capacity through private healthcare providers as well as an increase in community transmission.”

The city is advising residents to stay at home as much as possible. 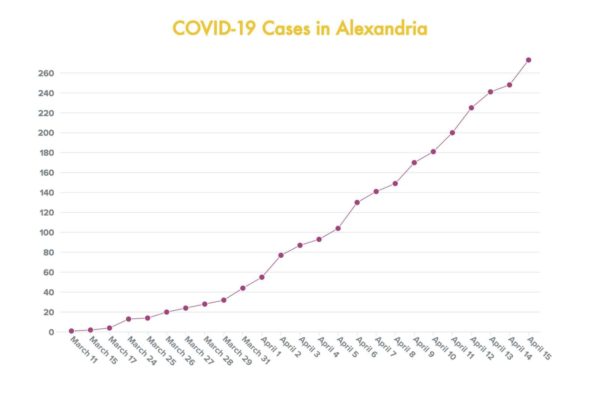