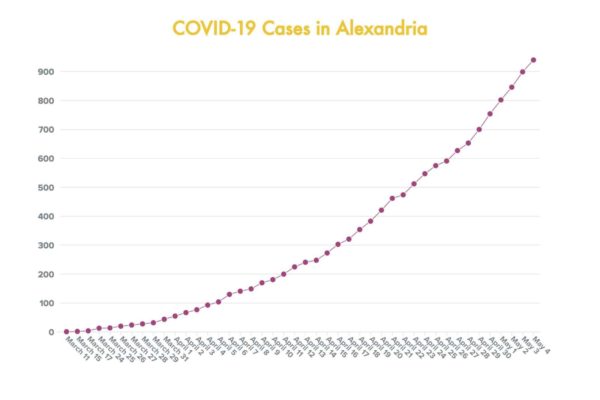 There are now 940 probable and positive cases of COVID-19 in Alexandria, an increase of 41 cases since yesterday.

While no new deaths have been announced, there have been COVID-19-related 26 deaths in Alexandria, the most recent of which were reported on Saturday and were a man his his 50s and a man in his 70s, according to the Virginia Department of Health.

Most fatalities related to the virus have been people over the age of 50, although the highest numbers of those infected are in their 30s and 40s. There has been one death of a person in their 20s. There were no new cases reported for residents in their 80s, teens, and those between 0-9 years of age.

Here’s the age breakdown of deaths and new cases in the city:

There have been 138 new or probable cases in the city in the month of May alone. VDH also reported that there are 110 COVID-19-related hospitalizations in Alexandria, which is an increase of one male patient in his 70s since yesterday.

VDH also broke down the caseload by race, although only black/African American residents and white residents are disclosed, and other races are categorized as “Other” and “Not Reported.” City Councilman Canek Aguirre warned in a City Council meeting last week that not listing Latino populations or reporting them as “other” means the city is not getting the full picture of who is impacted by the virus.:

The Alexandria Health Department is reportedly asking VDH for a more data. The city’s Health Director, Dr. Stephen Haering, initially refused to release any information related to COVID-positive patients and fatalities, and more data has steadily been released to the public over the course of the last month.

Statewide, there have been 684 reported deaths, which is an increase of 24 deaths since yesterday, according to VDH. There are now 19,492 cases (18,640 confirmed, 852 probable) and 2,700 hospitalizations (including 19 probable cases). Additionally, 122,788 tests have been administered in Virginia.