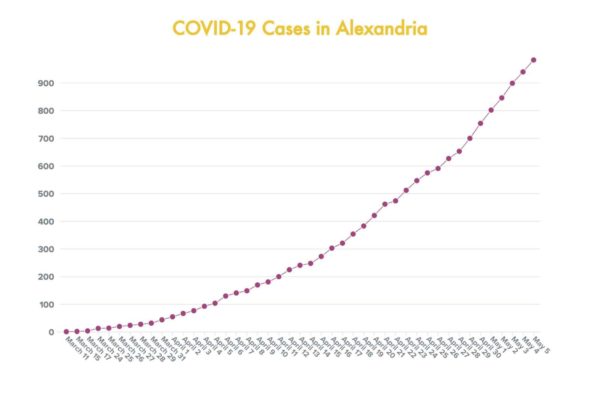 There are now 983 probable and positive cases of COVID-19 in Alexandria, an increase of 43 cases since yesterday. No new deaths have been reported for the third straight day, and fatalities from the virus remain at 26.

The latest fatalities in the city due to the virus were reported on Saturday, and were a man his his 50s and a man in his 70s, according to the Virginia Department of Health.

Most fatalities related to the virus have been people over the age of 50, although the highest numbers of those infected are in their 30s and 40s. There has been one death of a person in their 20s. There were no new cases reported for residents in their 80s, teens, and those between 0-9 years of age.

While the VDH data does not add up to the number of new cases in the city, here’s the age breakdown of deaths and new cases:

The city advised that reopening the doors to commerce will be dependent on a decreased rate of deaths and new cases. On Monday, Governor Ralph Northam announced that if the numbers go down that the state could reopen by mid-May and that more information will be released in the coming days.

“Executive Order 55, the stay-at-home order in effect until June, may also be modified to a less restrictive ‘safer at home’ policy,” the city announced in a release. “Under the first phase of reopening, businesses would still have to maintain physical distancing and implement enhanced cleaning and workplace safety measures… The risk from COVID-19 has not passed, and it is critical to continue practicing physical distancing, wearing cloth face coverings when physical distancing measures in public cannot be maintained, and other steps to stop the spread of COVID-19.”

There have been 181 new or probable cases in the city in the month of May alone. VDH also reported that there are 120 COVID-19-related hospitalizations in Alexandria, which is an increase of 10 patients since yesterday.

New data was presented today on the city’s Hispanic and Latino population.

Last Saturday, the Alexandria Health Department released that more than half of COVID-19 deaths in the city occurred at long-term care facilities. The department disclosed that 58% of fatalities occurred at the facilities.

Statewide, there have been 713 reported deaths, which is an increase of 29 deaths since yesterday, according to VDH. There are now 20,256 cases (19,357 confirmed, 899 probable) and 2,773 hospitalizations (including 19 probable cases). Additionally, 127,938 tests have been administered in Virginia.