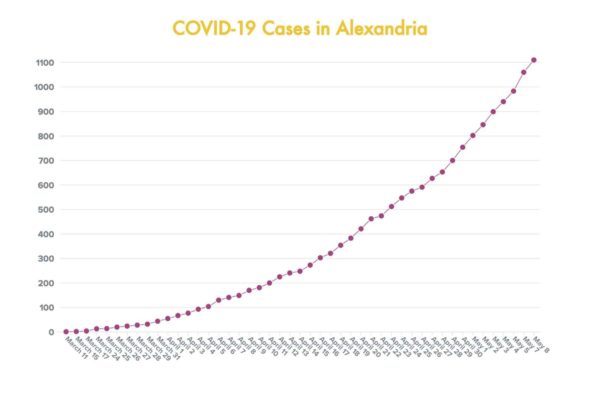 There are now 1,110 probable and positive cases of COVID-19 in Alexandria, an increase of 50 cases since yesterday. No new deaths have been reported since yesterday, and fatalities from the virus remain at 29.

Most fatalities related to the virus have been people over the age of 50, although the highest numbers of those infected are in their 30s and 40s. There has been one death of a person in their 20s. The three most recent deaths were three women in their 80s (two white women, one black/African American woman).

The Virginia Department of Health is now providing data on cases by ZIP code, revealing that Alexandria’s poorest areas have been hit hardest by the virus. The 22305 ZIP code, which includes the Arlandria, Potomac Yard and Potomac West neighborhoods, has the largest number of reported cases at 317 and an estimated population of 16,095 residents.

The next highest is the 22304 ZIP code, which includes the Landmark area, the Duke Street corridor and the Cameron Station community, and has an estimated population of 54,003 residents and reported 296 cases.

“The ZIP codes with the highest rates of known COVID-19 cases in Alexandria are also the ZIP codes with higher concentrations of poverty, lower education levels, and crowded housing conditions,” according to a city news release. “The populations living in some ZIP codes have historically experienced discriminatory policies and systems, resulting in inequitable access to healthcare, economic opportunities and affordable housing.”

The city added, “Inequitable conditions have created disproportionate rates of chronic health issues resulting in large differences in life expectancy across Alexandria. Now, these chronic health issues also make people more susceptible to severe disease from COVID-19 infection. Additionally, these community members are more likely to work in jobs where they are underpaid, do not receive paid sick leave, and are not afforded telework opportunities, creating additional risk of exposure to the COVID-19 virus.”

On Thursday, Mayor Justin Wilson wrote a letter to Governor Ralph Northam asking that the state ease restrictions on providing health data on the city’s long-term care facilities, where more than half of the city’s COVID-19-related deaths have occurred. It is not clear if the three most recent deaths of women in their 80s occurred in a long-term care facility.

“There are very few jurisdictions in the Commonwealth who have been harder hit by COVID-19 than Alexandria,” Wilson wrote. “Particularly hard-hit by this pandemic have been the City’s Long-term Care Facilities. Alexandria has 9 such facilities, including 5 skilled nursing facilities and 4 assisted living facilities. Of these 9 facilities, 8 of them have been the location of COVID-19 outbreaks, leading to over half of our deaths from the virus.”

‪Alexandria’s Long-Term Care Facilities have been hard hit by COVID19.‬‪We need better transparency to protect the…

Posted by Mayor Justin Wilson on Thursday, May 7, 2020

The Virginia Department of Health did not update a large amount of data on cases in the city since yesterday. The previous day, on May 6, VDH reported a glitch on its website and did not release any updated data.

Below is the latest publicly available data, which was released to the public yesterday:

There have been more than 300 new or probable cases in the city in the month of May alone. VDH also reported that there are 129 COVID-19-related hospitalizations in Alexandria, which is an increase of two patients since yesterday.

VDH did not update the following racial and ethnic breakdown since yesterday: