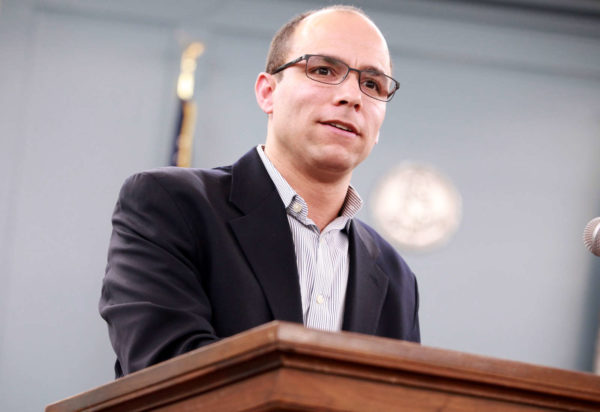 Alexandria Mayor Justin Wilson doesn’t want to hold any other political office. He also wants to be elected at least once more in November, and in less than two months he’ll square off in a Democratic primary rematch against his political rival, former Mayor Allison Silberberg.

Wilson says the June 8 primary really isn’t about he and Silberberg, but more about the direction that the city wants to go. In fact, he never mentioned his opponent by name during a 45-minute conversation with ALXnow. He’s raised $90,000 to Silberberg’s $64,000, hired Henry Watkins (Sen. Adam Ebbin’s Chief of staff) as his campaign manager, and has a goal of knocking on more than 2,000 doors.

“We’re talking about the future of the city,” Wilson said. “I think what you’re going to hear me talk about in this election is policies designed to protect the city’s future, protect our residents and make sure that we build a more resilient city coming after this horrible shock of the last year.”

Still, Wilson — an admitted social media addict — has lately been posting about numerous 6-1 votes that went through during Silberberg’s tenure as Mayor. Wilson, who was vice mayor under Silberberg from 2016 to 2019, led most of Council’s opposition to the then-Mayor on such issues as development of the Silverado Memory Care facility, funding construction of MacArthur Elementary School, and approving The Spire affordable housing project. He does not mention Silberberg in the posts, only hinting that she made wrong decisions.

“If it’s unspoken, it’s gonna stay unspoken,” Wilson said. “I’m focusing on these efforts because they are benefiting our community.”

The 42-year-old Wilson is married with two children and lives in Del Ray. For his day job, he is a senior manager for Amtrak. He was elected in a special election to Council in 2007 after the resignation of then-Vice Mayor Andrew Macdonald. He lost reelection in 2009, was elected in 2012 and was elected as Vice Mayor in 2015. He then defeated Silberberg in the Democratic primary for mayor in 2018.

The last 13 months of the pandemic have brought historic change to Alexandria, and now Wilson wants to go back to in-person City Council meetings.

“I think we should be back already,” Wilson told ALXnow. “My colleagues (on Council) are uncomfortable, so it’ll be up to my colleagues to decide when we go back.”

Wilson said he will decide on a running for third term at the conclusion of his second.

One of Silberberg’s biggest complaints about Wilson is that he’s a bully, most recently during a City Council meeting where Councilman Mo Selfeldein abruptly left after an argument. Wilson said the accusation is “ridiculous”.

“I don’t believe it has any basis in fact,” Wilson said. “I’m also not trying to run a rerun the 2018 election. Apparently others are. I don’t think the residents of our city can afford that. I think this has to be a campaign about the future, has to be an election about how this city moves from one of the most significant shocks it has ever faced.”

The past three years have seen momentous change in Alexandria, as arguments over issues like the Seminary Road Diet have moved on to the budgetary crises and emergency decisions City Council has been confronted with since the onset of the pandemic. Now, Wilson and Council face further belt-tightening as the city approaches its second straight multimillion budget shortfall.

“It’s a crazy time,” Wilson said. “But what’s nice about this moment is that, unlike a year ago where I think we were filled with terror and and angst and didn’t know when anything would him or get better, now I think folks understand the end is near, and that’s exciting. It’s got people more energized, but our challenge now is holding that back and making sure folks are patient, and recognizing that we still have work to do and we can’t let our guard down. But it’s much better than it was a year ago.”

He continued, “The last year has been a year where the 160,000 residents of this city are more than ever before looking to their government to protect them, to address their public health needs, to address their personal health needs, to give them access to a lot of critical services at a level that has never been the case in my previous 10 years of service on council.”

Still, looking at the future means taking care of long-existing problems. Last summer, for instance, Alexandria was plagued by severe flooding after numerous rain events, prompting Council to face decades (and hundreds of millions worth) of stormwater management issues. Earlier this year, Council unanimously approved increasing the city’s stormwater utility fee from $140 to $280, which is estimated to eventually add $155 million toward flood mitigation efforts.

“That was an area we badly underinvested in for a long time,” Wilson said. “I was prepared to tee up this issue last year in response to the July 2019 storm, but unfortunately the pandemic hit and we basically shelved anything that was a new revenue increase, because we just didn’t feel like it was right in the face of a pandemic to raise new revenue. I’m glad that Council finally unanimously approved the increase, and it’s going to take years to address these issues.”

Wilson says he’s willing to consider alternatives to the Taylor Run Stream Restoration project, if it costs less and can meet the 2028 completion deadline that the federal government has laid out. Critics of the city’s plan say that natural habitats stand in danger of destruction and that the city’s soil analysis for the watershed is flawed.

“If there is an alternative that allows us to meet the Clean Water Act, the Chesapeake Bay TMDL (total maximum daily load) and meet the schedule that the federal government has laid out for us, and does not place the city in a prohibitively expensive financial situation, I’m happy to explore alternatives,” Wilson said. “Nobody has identified an alternative that that is not prohibitively expensive, and would essentially take away all of the new flooding resources that we just raised by doubling the stormwater utility.

A majority of Council candidates are running on government transparency. Wilson has been criticized for leading a government lacking in transparency, with a police force that does not wear body cameras, community surprise over an option to co-locate affordable housing on school grounds and a public school system out of step with regional neighbors on easing COVID-19 restrictions.

But Wilson says he’s been a leader on government transparency, and cites Alexandria as the first local jurisdiction to include financial disclosure reports for elected officials, and publishing internal audit reports on the city website.

“Transparency in government is something that I’ve been working on since I was very first elected in 2007,” Wilson said. “I’ll continue working on it as long as I’m on the City Council. There’s a reason I send a several-thousand-word newsletter out every single month to 12,000 plus Alexandrians. It’s to make sure they’re informed about what’s going on in their government. It’s the reason I put what I put on social media all the time and making sure that Alexandrians can access the government that they fund and that they provide support for.”

“If you look back at my entirety of my political career in Alexandria, I’m constantly answering emails constantly answer tweets, constantly answering Facebook posts,” Wilson said. “That’s fine, that’s what I signed up for. It’s part of my commitment to to transparency in government — explaining how I make decisions, how I approach issues, why I do the things that I do.”

He added, “I never want anyone to be able to say that they did not understand how I approach the decision how I made a decision, or what my what my what my view was like I don’t, I, you know, I try to give people a pretty good insight into what’s going on inside my brain, and that’s part of my, my commitment to transparency.”

Recovering from the pandemic

Wilson, who has two children in the public school system, recently said that ACPS needs to fully reopen as soon as possible, and that the school system is going to need expanded resources for students coping with the experience of the pandemic.

“That’s going to mean expanded resources for social, emotional and academic supports for our kids,” he said. “That’s going to mean additional instructional time. All kinds of things that are going to be have to be budget priorities for the city going forward… What do we do to fix the damage that our kids have suffered? Without question our kids have suffered, perhaps more so than almost any part of our population, and we’re gonna have to figure out how we fix that.”

Wilson said he gets frustrated by isolationist thinking.

“I think this last year is taught me this — that we are all in this together — and that’s been a frustration for me,” he said. “We’re not all islands. Our behavior, our actions affect everyone else. Just because, like, if you’re not wearing a mask, it’s gonna have impacts on other people. If you’re not appropriately social distancing, it’s gonna have impacts on other people. And quite honestly, if you were quite recently butting in line in the vaccine line, it’s going to take away a dose from someone who is at a higher priority level for public health reasons.”