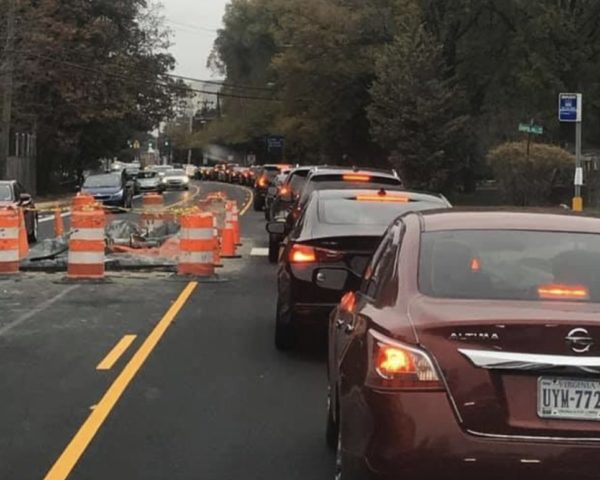 Big things have small beginnings, and on Wednesday night a number of Alexandria residents critical of the Seminary Road Diet — including a former mayor — took their concerns to Ramparts Tavern and Grill.

Architect Tom Hoffman has lived near the affected area for 20 years, during which time he has taken Seminary Road to get on I-395 northbound to the District. That routine has changed, he said, since the implementation of the road diet — reducing the four through lanes of the roadway to two and adding bike lanes and a turn lane in the center.

“I have taken to using Quaker Lane to get myself off Seminary in the morning,” Hoffman told ALXnow. “I mean, other people have said it’s not that bad, but when something goes wrong on a very narrow road, like Seminary Road is now, you don’t have any way to maneuver around a stalled vehicle or other problems.”

For some the social gathering, which lasted from about 5:30-7 p.m., was a chance to commiserate with neighbors who are frustrated over what they see as worsening traffic on the one-mile stretch of road near the city’s only hospital. Whether the road changes, including the addition of pedestrian refuges in the middle of the street, are hindering emergency vehicles was a hot topic of conversation.

“I think everybody can admit mistakes. I certainly can,” Hoffman added. “And pedestrian traffic islands — seven of them — are a mistake, in my opinion.”

Hoffman invited 1,500 people to Ramparts and about a dozen showed up, including former Alexandria Mayor Allison Silberberg, who said she wanted to hear from residents on the issue in person. The invitees were all members of the Alexandria Residents Against the Seminary Road Diet group on Facebook.

“It’s a major arterial roadway, it’s the main road that leads to our only hospital where seconds matter, not just minutes, but seconds,” Silberberg said. “Before the road diet it was a very safe road, and now we’ve had a number of accidents. The traffic jams are enormous. The inconvenience is huge. I think all of us are for public safety, but the fact is, according to the data, the road was extremely safe prior to this.”

Old Town resident Hal Hardaway also went to Ramparts, and said the problem is a city government that makes up its mind without sufficient community input.

“Everything’s been decided, you know. It was decided years ago, and we go to these public meetings and hearings and we get fed BS and Seminary Road is one of the best examples I’ve seen,” Hardaway said. “Politically, I’m looking at the next election and I’ve got my fingers in about four or five groups.”

Significant traffic delays were reported in the beginning days of roadway reconstruction, but have since lessened, according to city traffic data. The delays are often for relatively short stretches of the rush hour, with significantly lighter traffic at other times. While Inova Alexandria Hospital is located on the reconfigured stretch of Seminary, the fire department has reported no issues getting around the area.

Bill Rossello is a member of the Seminary Hill Association and an administrator of the Facebook group. He didn’t attend Wednesday night’s meeting, but said in a recent phone call that the goals of his group are simple.

“First, we want to reverse the road diet and maintain the improvements for pedestrians in some way,” Rossello said. “We need for the city to really find a better way to do civic engagement and take the pulse of the community. They totally missed the boat on that. Lastly, include civic association members on every ad hoc committee that is developing an important policy for the city.”

The conversations on the Facebook group have grown more wide-ranging since its founding, with members now railing against other city initiatives they disagree with, like the recent dust-up about housing on school sites. One of the goals of the Ramparts meeting was to strategize future political activism.

The City Council will receive a staff update on the Seminary Road issue at its legislative meeting on Feb. 11 at City Hall.