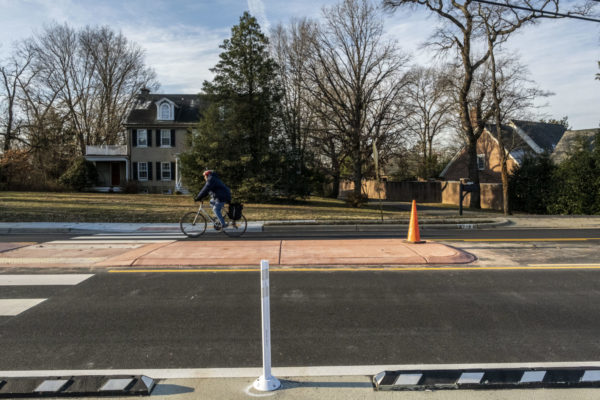 There have been no complaints or transportation issues with fire and emergency personnel along the stretch of Seminary Road that has undergone the controversial road diet, according to Alexandria Fire Chief Corey Smedley.

“The measures needed for us to safely travel on Seminary Road before, during, and after an emergency call have been put into place,” Smedley told ALXnow. “At this point, we haven’t received any complaints from our drivers or battalion chiefs regarding travel issues. Our priority will always be the safety of the community and the members of the Alexandria Fire Department. When we receive an emergency call, we will do everything within our power to respond and navigate the City no matter the circumstance or conditions.”

The city initially admitted that there were significant traffic delays as the lane reduction was being implemented between N. Quaker Lane and Howard Street, though those delays have since lessened, according to Mayor Justin Wilson. Inova Alexandria Hospital is located on the reconfigured stretch of Seminary and there has been concern that the road diet impacts access for emergency personnel.

Despite the fire department not reporting any issues and Virginia Theological Seminary — a major property owner along Seminary Road — supporting the changes for its pedestrian safety improvements, former Alexandria Mayor Allison Silberberg has joined the chorus of community members who are asking that the roadway be put back the way it was.

She said that the road is an “unnecessary risk to public safety.”

“According to the City’s own data, this portion of Seminary was among the safest streets in Alexandria,” Silberberg said. “There was a legitimate need for additional pedestrian crosswalks, but this could have been done without the road diet.”

“In addition to the incredible traffic jams our residents now experience on Seminary Road and adjoining roads, the overriding concern to all of us should be the safety of those who need to reach our City’s only hospital during emergencies,” she continued. “The construction of raised medians combined with the reduction of travel lanes has created a potentially dangerous situation for our first responders and residents. We all know that during emergencies, minutes and even seconds matter. Thirteen Civic Associations from across the city and the Federation of Civic Associations were correct when they urged the City not to reduce the capacity of a major arterial road by 50%, creating significant traffic delays and unnecessary risk to public safety.”