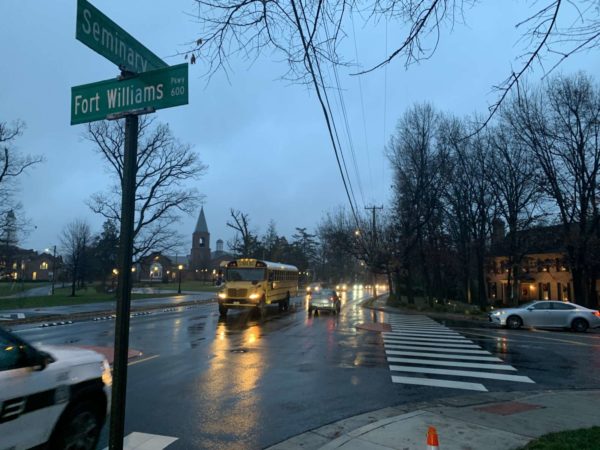 In a letter to Mayor Justin Wilson, the Virginia Theological Seminary has weighed in on the clong-running argument over the road diet happening at the school’s doorstep.

A letter from Ian Markham, Dean and President of the Virginia Theological Seminary, included support for the reduction in vehicle travel lanes and hints about future expansion plans for the school. The letter was shared in the exceptionally active Facebook group Alexandria Residents Against the Seminary Road Diet.

Markham said the Seminary is the institution most impacted by the changes, with facilities straddling the road.

“We have over 280 residents on the campus,” Markham said. “Now I cannot speak for the additional fifteen to forty people in the private houses, but for the Seminary, we are delighted with the change. With the sole exception of a thirty-minute back up between 8:10 a.m. to 8:40 a.m. (which dissipates quickly), the traffic is slower, calmer, and the whole street is quieter and much more gentle. It has worked wonderfully.”

The letter, predictably, was met with some disappointment from the Facebook group, where responses ranged from polite disagreement to members calling it an “obnoxious, self-serving load of twaddle.” Markham, on the other hand, had previously — and jokingly — called for biblical plagues to convince locals to support the road change, according to the Alexandria Gazette.

It isn’t the first time Markham has spoken up about the issue. During the City Council discussion in September, members of the Seminary showed up in religious garb and Markham said the four-lane arterial road creates problems for the school, according to the Alexandria Times.

Markham said in the letter that he would ideally want a 15 mph limit on the road near the school, but said he didn’t expect that to happen. He also noted that the school could be expanding into five acres on the south side of the Seminary with a new garden complex.

“But I need to be confident that students can move safely back and forward across Seminary Road,” Markham said. “With this change, I think I can look at that area and really develop it to benefit not just the Seminary, but the neighborhood and the city.”

The city admitted that there were significant traffic delays as the road diet was being implemented. Much of the road work has been completed, though the city is still seeking grants to add a permanent sidewalk to the north side of the road near the Seminary.

Mayor Wilson said in an email on New Year’s Day that the road diet produced a 40-100% increase in vehicle travel times along Seminary Road during some peak periods, though delays have since lessened.

City Council Member Amy Jackson riled others on the Council last month over a last-minute proposal to stop all work on the road changes until further study can be done on the traffic impacts. The proposal was shot down by the other members of the City Council, but the discussion led to a request for staff to return sometime early this year with a report on the Seminary Road traffic impact.

The Virginia Theological Seminary could not be reached for comment.