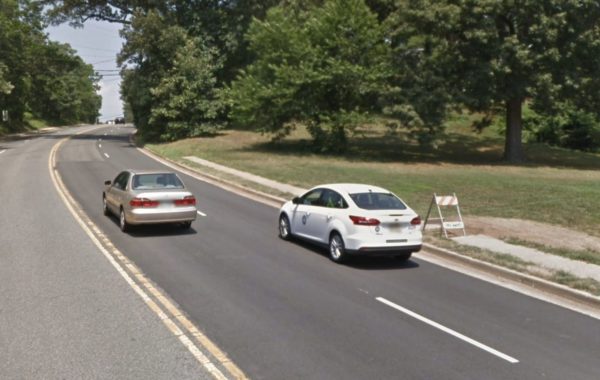 As part of its controversial efforts to improve bicycle and pedestrian access to Seminary Road, the city is planning to install a sidewalk on the north side of the road — if it can get the money.

Much of the Complete Streets project on Seminary Road has been completed but the city is still hoping to add a new sidewalk next to the seminary from which the road draws its name.

“It’s still ridiculous that in 2019 that there are places in Alexandria where we don’t have sidewalks,” Mayor Justin Wilson said. “For me, priority was not about bike lanes, it was about pedestrians. It was about completing the sidewalk network.”

Wilson said the sidewalk would go from just west of Quaker Lane, where an existing sidewalk currently ends, up to the Virginia Theological Seminary.

The sidewalk has been in the plans for the road since the concept stage, according to Sarah Godfrey, a spokesperson for the Department of Transportation and Environmental Services. Construction will require the approval of a grant request to VDOT made by the City Council in September.

As of December, city staff said work from road resurfacing and roadway markings to new median islands has been completed. Wilson met earlier this week during the morning rush hour with local residents, many of whom expressed frustrations with traffic caused by the narrowed street and the lack of cyclists using the new bicycle lanes.

“It was a good session,” Wilson said. “Probably better to have these discussions in person rather than social media.”

Wilson said he understood the concerns of the local residents, who have labeled it #JustinsTrafficJam in the nearly 1,000-member Facebook group Alexandria Residents Against the Seminary Road Diet. Wilson is, ironically, listed as a member.

“There’s always an adjustment whenever you make a traffic change as people get used to it. I think we expected that going in,” Wilson said. “There’s kind of a rush on both sides to draw conclusions very quickly, but the full story of this will be told over time. We’ve committed to being data-driven — looking at this when it’s done and making sure we’ve achieved the goals of the project.”

Godfrey noted that the city will continue to post weekly updates on the Seminary Road Complete Streets page and update the FAQ.