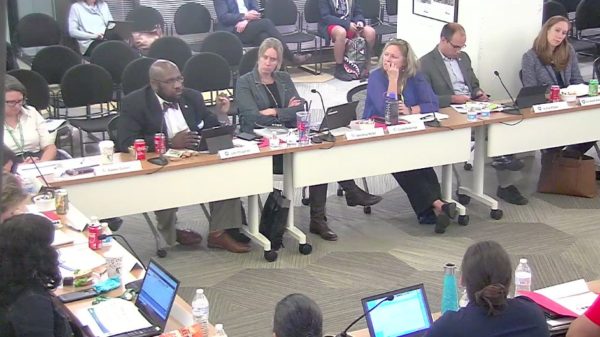 Gone are the days when the Alexandria City Council and School Board’s joint meetings were bloody affairs where both sides would haggle over monumental budget gaps. But under the surface, members of the City Council were dubious at last night’s (Wednesday) joint session that enough is being done to align city and school interests when it comes to new development.

One of the most-discussed goals of the collaboration between the city and schools is co-locating facilities — moving away from new developments being single-use and towards projects that might include a school along with recreational facilities or housing.

A running theme through the meeting were concerns from city officials that there haven’t been more efforts to co-locate city and school facilities in new projects.

“Are we moving towards the view of having joint facilities?” asked Councilman John Chapman. “That was talked about in the joint task force, but I don’t necessarily see that. I’m hoping to see something much different. It doesn’t always happen overnight, but let me know the status of that because I don’t want to have a conversation about schools on one hand and the city on the other… I’m not seeing what I expected.”

Superintendent Gregory Hutchings walked the City Council and School Board through Alexandria City Public Schools’ (ACPS) plans for dealing with capacity issues, and City Manager Mark Jinks highlighted how the school funding fit into the tangled web of the city’s budget priorities.

Hutchings said that school and city staff have been working closely over the last year, as evidenced by more closely aligned budgets.

“That is where we’re having discussions around projects and funding,” Hutchings said. “For example, when you look at our presentation, there’s nothing in our presentation that’s going to be surprising to the City Manager and his team. These are all discussions we’ve had. We still not be where we’re seeking to be, but I know we’re not where we were. I can definitively say we’re not where we were.”

On the city side, Jinks agreed, saying that city staff are present in the discussions for every major school capital project. Jinks, a veteran of years of squabbles between the City Council and School Board, said joint planning is going much more smoothly than it had in previous years. Every project is examined for potential to co-locate city facilities, but Jinks said the right opportunities haven’t emerged yet.

“It’s all city money at the end of the day, so we need to look at decisions that benefit both of us in the way that make the most sense,” Jinks said.

Jinks added that the city and schools have also started looking into new types of public-private partnerships — in particular examining models used in other localities and how they could be applied to Alexandria.

“We are collaborating,” Hutchings said. “That’s not superficial. We are not making decisions without collaborating with the city. Period. Compared to what it was like before, it’s night and day. Some of [Jinks’] ideas and suggestions made it into our plans. That collaboration is real and we want to continue to have that kind of relationship with the city or we won’t be able to make the most fiscally sound budgets.”

But the process is still moving too sluggishly for several city officials. Chapman argued that he didn’t want to see another CIP pass without co-location appearing in plans. Mayor Justin Wilson said he could easily envision scenarios where the schools get too far into planning a project that city needs aren’t fully explored.

“I don’t want to be at the point when you guys are ready to build a building and ask for money, but we’re told that the runway is too short to consider other options,” Wilson said. “It’s too big of a check we’re writing to not seize some of these opportunities.”

In particular, Wilson pointed to the School Board moving forward with plans for the T.C. Williams expansion without what he considered a significant consideration of how the new facilities could also meet city needs.

“I’m not suggesting there’s not collaboration,” Wilson said. “You’re right, it is night and day. But the challenge I have — and this is specific to high school — is the fact is we’ve had money in the CIP for the high school for three years and every year we’ve been carrying that money forward and now the numbers are getting bigger… Here we are, staring down the largest investment we’ve ever made in a single school facility, and I don’t see what I’m looking for.”

Budget Pressures on Both Sides

Staff on both sides of the discussion also pulled back the curtains to show the budgetary strain both groups have been under.

“As a school system, we are operating under a huge deficit,” said School Board member Meagan Alderton. “In terms of everything that we have to dig out of, sometimes I’m worried about even having enough people to do the level of work that we need to do.”

For the city, Chapman admitted that a tax increase was likely in the upcoming budget, but that the city’s taxes on local businesses and residents were already bordering on causing economic damage.

Jinks warned that the city has nearly hit the state-allotted limit on consumer taxes, like hotel tax and meals tax, and slimming down city staff and services has also reached the end of its utility for budget cuts.

“We’re asking departments to make 2.5 percent cuts,” Jinks said.” We are operating the city government with less employees than we had ten years ago, with a ten percent increase in the population. The low hanging fruit is gone. The fruit in the middle of the tree is gone. But we’re still looking for opportunities to save money and be more efficient.”

“If you can figure out how to co-locate our sanitary sewer projects on school sites,” Wilson said, “now we’re talking.”

No one on the school side volunteered.