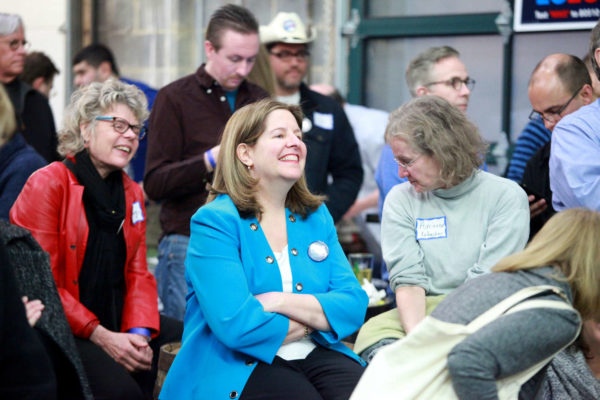 Former Alexandria Mayor Allison Silberberg says that Mayor Justin Wilson is a bully, and is taking him on for the June 8 democratic nomination.

“I was the mayor, and now I’m running for mayor again,” Silberberg told ALXnow. “I’m so honored that so many people have called and and some have tears in their eyes. I’ve been inundated with messages.”

Silberberg, who did not reach out to Wilson on her intentions, turned in her signatures to the city’s registrar of voters today (March 24), and plans on making a formal announcement in the coming days. She said that Wilson has been dismissive of the needs of civic associations on environmental issues, such as Taylor Run, and that he was rude to City Councilman Mo Seifeldein in Tuesday night’s meeting.

“He bullied him and he doesn’t calm down the situation as a mayor in that position should have done,” Silberberg said. “We will literally have to rebuild the public trust from the ground up… This is a pattern of behavior and I want to return civil discourse to our wonderful, beautiful city.”

Wilson welcomed Silberberg to the race, and said that he’s proud of the work that Council has accomplished in the last two years.

“I’m proud of the work we have done during the previous two years, including a new Alexandria Hospital at Landmark Mall, five new schools over the next decade, the largest infusion of money for storm sewers in our City’s history, redevelopment of the coal-fired power plant on our waterfront, expanded early childhood education, construction of a new metro station, advancing climate resiliency, a new racial equity plan and more,” Wilson told ALXnow.

Wilson defeated Silberberg by 1,259 votes in the June 2018 primary, and received 11, 442 votes, or 52.91 percent, to Silberberg’s 10,183 votes, or 47.09 percent. Wilson was vice mayor under Silberberg, who was vice mayor herself for a single term before winning a dramatic three-way primary between former Mayors Bill Euille and Kerry Donley in 2015. Her tenure was marked by lone 6-1 votes, where she and council did not meet eye to eye. Much of the opposition during her mayorship was led by Wilson.

“The people know my heart, and they know that I’m about, ‘We the people,'” Silberberg said. “Our city deserves better, and we have to restore the public trust. We have to focus on ethics, transparency and accountability.”