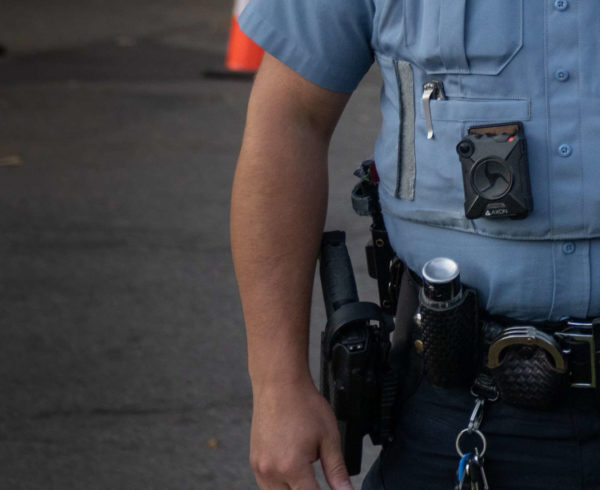 It’s been five years since the Alexandria Police Department started making widespread plans to outfit police with body-worn cameras with little progress, but that could change soon.

“We are going to go ahead with a cost analysis for implementation to provide to the council for consideration,” Chief Michael Brown said, “and we’re trying to accelerate in the light of what is happening now, but it’s it’s a fiscal issue for us more than anything else.”

Brown said the department is not opposed to body cameras, but that there are logistical concerns concerning the fiscal cost and staffing.

“The body cameras themselves are relatively cheap, but the storage costs are very expensive, especially with the retention period of six years retention in the Commonwealth,” Brown said.

Jay Farr, the chief of neighboring Arlington County Police Department, recently argued that antiquated state rules about how long data is kept in storage are partially at fault. Brown said the data storage as a big cost-driver, but also said that staffing adds to the costs as well.

“It’s really become a fiscal issue and it’s not just for the police department,” Brown said. “We certainly have storage costs. Those are high in the Commonwealth because it’s a six-year requirement to not destroy the reference under the statutes in the Commonwealth. But there are other people that touch that information, and we’ve been looking at some of the alternative approaches to reduce those costs. All that stuff is touched by a number of folks, not just the police, but it’s also by the Commonwealth’s attorney and the city attorney look at it for information. There’s a number of staffing issues that have to be faced in this as well.”

Funding for body cameras had been in earlier budgets, but the emphasis was instead put on hiring more police officers. Recent protests across the nation have once again put a spotlight back on body cameras. Though the idea of body cameras as a tool for accountability has faced some criticism, in Fairfax County, body camera footage recently led to a police officer being charged with assault.

In Alexandria, there is a Change.org petition requesting that the City Council invest in body cameras for the police department. It could be a hard sell for a city expecting long-term financial losses from the coronavirus pandemic.

Earlier cost estimates in the Alexandria Police Department’s annual review of its 21st Century Policing initiative put the cost of body cameras at over $1 million. Brown said the department is preparing to do another cost analysis to see if those costs have changed.

“Next year is a budget retreat process, and during that period of time, the City Council usually gets proposals and things of that nature to consider, [so] we’re going to try and get it in their hands much sooner than that,” Brown said, “but it really depends upon how we work and how we get the information from some of the other agencies.”

According to city spokesman Craig Fifer a planned pilot phase has already been delayed by coronavirus and new state legislation makes the city wait for statewide policy to move forward:

The Alexandria Police Department is currently evaluating implementation of a pilot camera program. Program planning was recently delayed due to fiscal challenges resulting from the COVID-19 pandemic. The Fiscal Year 2021 budget (beginning July 1, 2020) includes funding for a dedicated position to evaluate implementation, and the City’s Capital Improvement Program notes that funding will be added in Fiscal Year 2022 for equipment and software. Police camera initiatives require significant new funding and policy development, including potential additional legal and IT staff in the Police Department, City Attorney’s Office, and Commonwealth’s Attorney’s Office. Staff and systems are necessary to supervise and monitor compliance with camera policies; securely maintain an extraordinary volume of data files while maintaining and documenting chain of custody; make files available to authorized users as needed; respond to requests for files from members of the public and private attorneys; redact portions of files that would not be appropriate to release; and other administrative tasks.

Effective July 1, 2020, a new state law will prohibit implementation of body-worn camera systems by a law enforcement agency until the Virginia Department of Criminal Justice Services establishes a model policy and the agency adopts a local policy after receiving public comment and review.

James Cullum contributed to this story. Photo via Tony Webster/Flickr