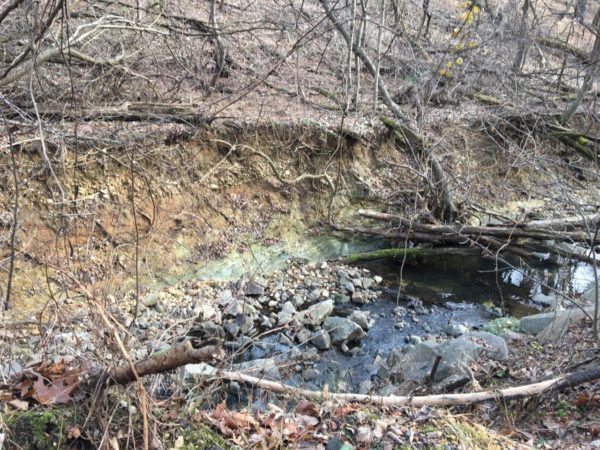 (Updated 3/9/21) Under growing pressure from local environmental activists like the Environmental Council of Alexandria to halt the planned Taylor Run Stream Restoration, city staff have fired back with a 10-page response to criticisms of the project.

Opponents say the city is overstating the level of pollution in the creek and the proposed overhaul of the stream bed would damage the health of the watershed by removing foliage, though the city says many of the trees being removed are dead and that more will be replanted.

Opponents also launched an email-campaign today to contact members of the City Council and the Department of Environmental Quality. One of their proposed alternatives is an expansion of the city’s tree planting program, but city staff suggested it would be far too costly.

“To achieve an equivalent pollution reduction, the City would need to plant between 421,000 and 686,000 trees at a low-end estimated cost of $84 million to $137 million,” the city said. “The Taylor Run Stream Restoration project is estimated to cost $4.5 million, including a $2.25 million grant from the state. While the City strongly supports expansion of its tree canopy, tree planting through the recently approved Urban Tree Canopy Expansion BMP is not a viable substitute for this project.”

But the opposition also says the soil is not as rife with pollutants as the city makes it out to be.

Samples collected by the city’s Natural Resources Manager Rod Simmons, in a study ultimately published in T.C. Williams student news organization Theogony, led to a claim that phosphorous levels were substantially lower than the city claimed in its models.

The city responded that the test being reported was an inaccurate measure of phosphorous levels in the soil. According to the staff report:

Conversely, soils data submitted from a local resident (and to which you refer) was analyzed using a method that understates the amount of total phosphorus to be reduced by the stream restoration project. It is staff’s understanding the samples were analyzed by the lab you referenced using the Mehlich-3 method.

This method is typically used to determine phosphorus in soil that is bioavailable to plants and does not capture total phosphorus, which is one of the pollutants of concern for the Bay TMDL. Staff contacted the Brookside Laboratories (referenced in your letter as the lab performing the analysis) and confirmed that the Mehlich-3 test performed by the lab on the soil samples does not measure total phosphorus. For these reasons, staff concludes the soils were not analyzed in a manner that could be used to calculate pollution reduction credits or to determine the financial cost-benefit for this project.

Simmons, in an email, said he sticks by the soil analysis.

“To check this assertion 10 soil samples were taken in 2020 according to standardized methods by R.H. Simmons from mineral soil of exposed stream banks along the 3 currently proposed City of Alexandria projects (Simmons 2020, 2021),” Simmons wrote. “Soil samples were analyzed for P using the Mehlich-3 method by Brookside Laboratories, Inc.  As expected, P levels were low in all of the samples (Mallarino et al. 2013).”

Simmons tested three streams and said the average was 0.24 pounds of phosphorous per ton of soil/sediment, and reported that the levels assumed by the city were five times higher than actual samples. He then defended his use of the Mehlich-3 P test, and said it’s the most commonly used soil P test method in the region, even recommended by the Virginia Department Conservation and Recreation and the Virginia Department of Environmental Quality.

“It is important to note that most soil tests do not directly measure the total amount of available nutrients in the soil ‘because there is usually not a clear cut distinction between available and unavailable nutrients’ (Danovi 2011),” Simmons wrote. “Also, it is not true that the Mehlich-3 P test significantly ‘understates the amount of total phosphorus to be reduced by [a] stream restoration project.’  As this exercise shows, as well as numerous aforementioned case studies, the Mehlich-3 P test is a perfectly sound method of gaining a largely accurate understanding of TP in a given soil sample.”