Alexandria is one step closer to seeing its stormwater utility fee double for residents, as City Council on Tuesday night accepted a report from city staff outlining its multi-million dollar plan to upgrade the city’s storm sewer capacity.

City Council approved receipt of the staff proposal 6-1, and it will be voted on in a public hearing on Feb. 20. Also approved was the formation of a nine-member Ad Hoc Stormwater Utility and Flood Mitigation Advisory Group. The plan includes doubling the $140 annual fee for residents to generate $15 million per year on $284 million worth of immediate and longterm projects, some of which aren’t slated to be completed for a decade.

Earlier this month, Alexandria Sheriff Dana Lawhorne joined his Del Ray neighbors in venting frustration over what he sees as a history of misdirected funds. Lawhorne criticized council for implementing a stormwater utility fee in 2018, and then redirecting significant portions of the monies toward Clean Water Act initiatives instead of much-needed improvements.

Councilwoman Amy Jackson was the lone dissenting vote, and raised an objection to the potential for the city to potentially acquire land through eminent domain in order to make some stormwater improvements.

“We’re in this position because we’ve raised stormwater fees in the past — 2018, right?” Jackson said. “And we are not anywhere near helping anybody, and honestly we’re still going down this path that there’s a whole trust and transparency issue.”

A number of heavy rainstorms in 2020 laid bare Alexandria’s besieged stormwater management system, leaving many damaged neighborhoods throughout the city. There were more than 500 requests for service through the City’s 311 system due to extreme rain events this year, according to a city memo.

Below is a graph showing storm sewer capacity projects in the city for Fiscal Years 2022 through 2031. 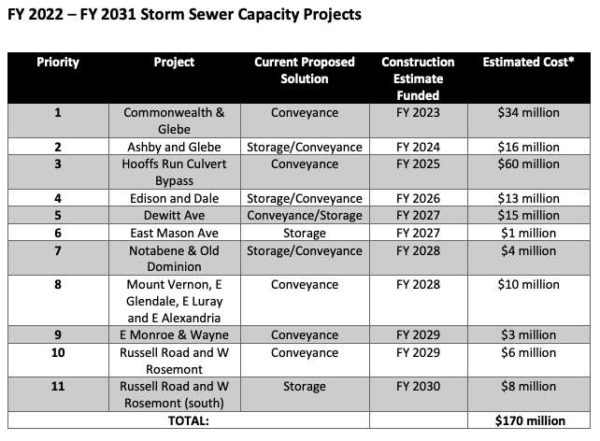