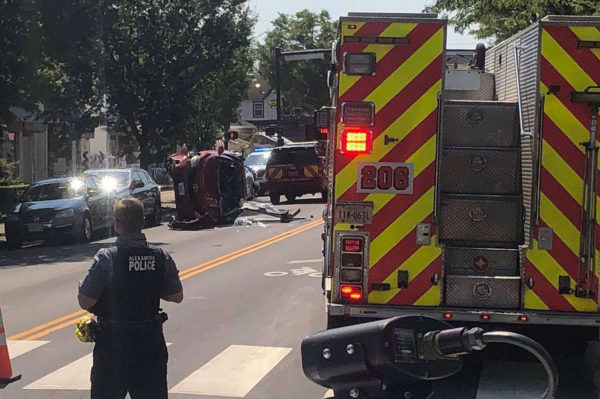 It’s the end of a busy week in Alexandria!

Our top story was the Del Ray car crash on Mount Vernon Avenue, and there’s some good news to report. The driver, who crashed her car due to a medical emergency, was sent home without any injuries the following day.

The city also experienced flooding after Thursday’s rainstorms, prompting the City Council to get an oral report on hundreds of millions of dollars worth of stormwater management improvements. As reported, there have been more than a half dozen flood events in Alexandria this summer.

Council also received a report on the establishment of a community police review board, and sent it back for some additions. Namely, Council asked staff to include an option that would give the review board independent investigative authority, an action that prompted a police union to call the idea of the review board “superfluous.” Incidentally, crime stories are among the top articles read every week on ALXnow.

This was also the first week of the historic 2020-2021 school year, and with classes starting virtually it will be an altogether different experience than years past.

The big story in Alexandria this week was the murder of Luis Mejia Hernandez on Tuesday. Hernandez was stabbed and killed in a brawl outside of the Mcdonald’s in the…

After a Sunday storm that knocked out power to much of the city, some locals suggested Dominion Energy look into undergrounding more of its utilities, but the power company says…

A severe thunderstorm warning has been issued for Alexandria and the city is starting to see heavy rainfall. The city is also under an areal flood watch. “The National Weather…