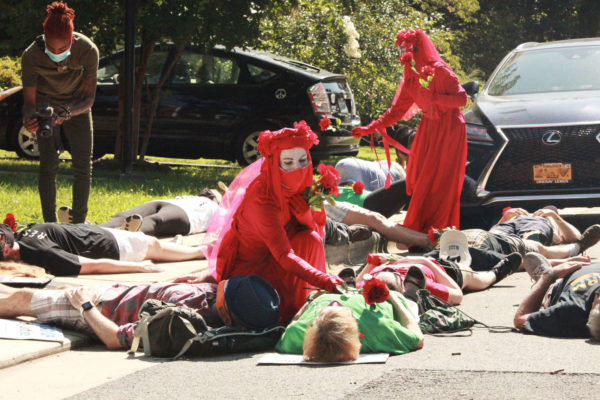 For the fourth time this summer, protestors demonstrated outside the Alexandria home of acting Department of Homeland Security Chad Wolf.

For the first time, however, the protestors participated in a “die-in” on the sidewalk and in the street, and said that they hope to drive Wolf and his family away from living in the city. The protestors pretended that they were dead for several minutes.

“This is a friendly, loving community. My husband and I chose it in 1990 for a reason,” said a protestor. “I don’t care what this man’s children find out about him. He deserves to be questioned by all of us.”

The protestors meet every other Sunday in front of Wolf’s North Ridge home. The first protest was organized by Shut Down DC, and the others have been organized by Alexandria residents.

“If somebody says ‘Why are these people here?’ The answer is read the Constitution,” a protestor said. “Article I of the Bill of Rights says that the people are guaranteed the right to gather peaceably, and to seek redress from the government for our grievances. That’s what we’re doing here. We’re peaceful. We’re stating what we think is wrong. It doesn’t matter if it’s in front of his house, if he’s out to dinner or at his office. Wherever he is, he is a representative of the government and we have a right to gather peacefully, and expect to address those grievances. It’s very simple.”

The protestors demanded that the federal government end family separation and immigration detention practices and the suppression of protests around the country with federal troops.

“For me personally, making him uncomfortable is part of the whole plan,” a protestor said. “The migrant families who are separated at the border, the kids who are in cages, these are unscrupulous actions. He needs to think what about what his children will hear about him. He needs to think how his neighbors are perceiving him and he needs to know what it is to be made uncomfortable.”

Last month, chalk graffiti was also sprayed on the street near Wolf’s home.