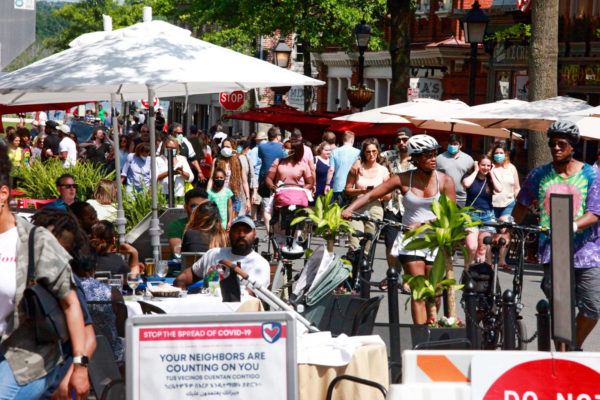 Can’t avoid a crowd in Alexandria? On Saturday, the Alexandria City Council will vote on an ordinance that requires people to wear face masks indoors and outdoors in settings where six feet of physical distancing can’t be followed.

A $100 civil fine would be imposed on lawbreakers, but city staff maintain that the ordinance is geared toward education and not enforcement. Police officers will not issue the civil citations, and the city manager’s office has yet to designate a city agency that would administer them. If approved, the ordinance would go into effect on October 1 and expire when Alexandria’s local emergency declaration ends.

“Personally, I don’t go anywhere without a mask,” said Councilman Canek Aguirre, who questioned the effectiveness of the enforcement aspect. “I am in favor of this ordinance and the concept of it, however I do have some hesitation.”

“My concern is that this is window dressing,” Jackson said. “If it’s a $100 fine and we’re down on lower King Street, who is enforcing it?”

There are exceptions. Children under the age of 10 will not be required to wear a mask, nor will people with disabilities that can’t wear them for health reasons and athletes falling within the governor’s executive order on COVID-19 restrictions.

What about waiting for food at a restaurant?

“Face coverings are still required to be worn while waiting to receive food or beverages, or during substantial breaks between periods of eating and drinking,” the ordinance states.

Assistant City Manager Debra Collins said that this is an important step in flattening the curve.

“We’re hoping that by having whatever designated department staff, whether it’s Parks and Rec., maybe some T&ES (Transportation and Environmental Services) and they see the need for some compliance, that we can offer the mask and we’re not necessarily charging one population that probably can not afford it,” Collins said.

City Manager Mark Jinks has not yet designated which department will ensure compliance, but said that staff will hand out face masks in public as a first step.

“I would say it’s about getting compliance through education, through having people who are not law enforcement officers who are on the streets,” Jinks said. “You basically tell somebody, ‘This is what you need to do for the good of the population, here’s a face mask,’ and you move on to the next person.”

Jinks added, “The advantage of having the ordinance is that it’s the law, you need to do this, and that helps underscore to folks that they need to keep the face masks on when they’re in public places described in this ordinance.”

“I think we need to be as safe as we can, but at the end of the day it’s going to be a social responsibility by each of us to try and wear the mask whenever possible, and this is a step that will hopefully get us to that point,” Seifeldein said. “We want this to become a habit over time.”

There are 62 COVID-related fatalities and there are now or have been 3,558 cases of COVID-19 in Alexandria, according to the Virginia Department of Health.