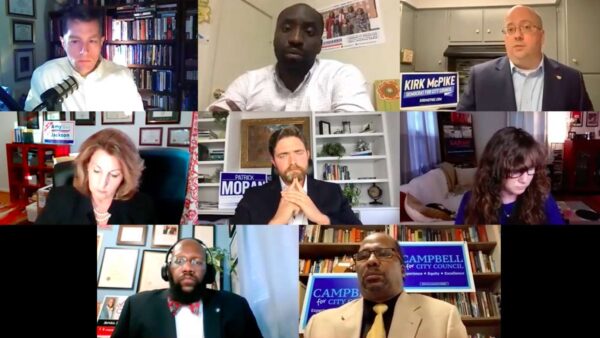 In a crowded City Council election, the Alexandria Democratic Committee split the candidates into two groups for moderated debates, which posted Tuesday night.

Alexandria journalist Michael Lee Pope moderated the discussion, which touched on critical talking issues in city races over the last few years, from parking to broadband to — of course — Seminary Road. Interestingly, the coronavirus pandemic was not a main topic of discussion.

The Democratic primary is June 8.

A number of candidates support reversing the  Seminary Road diet, which has been a controversial issue for years.

Chapman voted against the proposal in 2019, and said he would vote to reverse it.

Moran — “I think a lot of the framework in which these conversations are made are so permanent,” Moran said. “I would spend the money to undo it.”

Campbell — “I absolutely would not spend any additional money to change that unless there was some new information that came up with regards to safety,” Campbell said. “And then you have to be responsible to take a look at that.”

Jackson would also vote to undo it, although she said that future road diets would have to be considered on a case by case basis.

“This became a ‘he said, she said’ in a lot of ways that I don’t think anyone on council was prepared for when city staff brought it to us,” Jackson said. “That just means that we have to do our own sleuthing and know the questions to ask after we’ve done our homework.”

McPike said he would not undo the road diet.

“I would not initially in this next council session, vote to revert the road back to what it was,” McPike said. “The intersection at Howard and Seminary is going to change in the near future when Inova Hospital relocates to Landmark Mall, and we don’t know what the needs are going to be along that stretch of road once that has occurred.”

Harris — “It’s one of those things that we ought to wait and see how it plays out before we try to change anything,” Harris said. “Because we’ve already wasted too much money creating the road diet. I think that we could use this money in other places.”

Pope asked whether the city should emphasize minimum parking requirements or set maximum limits on parking at new developments.

McPike said that the city should look at future developments to determine parking minimums or maximums.

“Whatever we’re doing, we need to make sure that we’re making transit accessible, making our transit network viable for everyone to use to get around the city if they so choose,” McPike said. “Making DASH free is an excellent step in that direction, and so is making sure that we focus our development efforts and our new housing units on Metro and transit corridors like we have done near Braddock Road.”

Bagley — “I think we have to focus on the fact that we’re a small city, and a city that is more urban driven,” Bagley said. “I would be guided towards a development philosophy that places people near transit, near affordable frequent reliable public transportation, and still provide parking access for those who are don’t have the means necessarily to use public transportation, who need their own vehicle to get where they go. But I would be more inclined towards an urban mindset that is walkable, livable with parking maximums.”

Jackson — ” I think it is probably a situation where we have to look at each neighborhood, in order to determine whether how much parking there is supposed to be there.”

Campbell — “We also need to have a consistency in terms of the public lands and type of development that we do and what kinds of parking variances that we have,” Campbell said. “I think we’re moving in the right direction with the multimodal travel. We certainly want to have increased density around metro, and we want to have bus transit, and then in the areas where we can have safe walkable routes, we want to continue in that direction.”

Pope asked candidates to draw the line at what’s too far regarding co-location of affordable housing, namely whether accessory dwelling units (ADUs) and co-locating at schools should be considered.

Chapman said that he is all for providing affordable housing on the grounds of Alexandria City Public Schools property, provided that residents are city or ACPS employees.

“As we look at our school sites, the interest that I had for any type of colocation really revolved around staff and employees,” Chapman said. ‘A decent use for looking at any type of Colocating on housing would be looking at our staffing and employees, because we know of how tough it is for our staff to try to find housing within the city.”

Jackson voted against ADUs, and said she is against colocation on school property.

“We need that property for our kids for the schools,” Jackson said. “That’s where it needs to stay. I think we need to look outside and look at the other options. We have other office buildings, we have a lot of commercial real estate that that doesn’t have anybody in it right now because we’ve been telecommuting for the last 14 months. We need to look at options like redoing some zoning ordinances in this emergency situation to get our kids in those buildings as well as affordable housing in those buildings with residential use.”

“I think that students going to the new Virginia Tech Innovation Campus may end up living in some of these ADUs and hopefully staying in Alexandria to create businesses and pay commercial property taxes,” McPike said. “I am not comfortable putting housing on school grounds because I think that makes the space, inflexible, and we don’t have enough space for our schools. As it is, I am comfortable however with Colocating other sorts of civic resources like rec. centers or community pools on school grounds.”

Harris said that this issue comes up frequently, since he is a commissioner on the board of the Alexandria Redevelopment and Housing Authority. He also approved of colocating housing on school grounds for city employees.

“Ninety percent of our affordable housing in the city has been dissipated,” Harris said. “A lot of families have been moved out, and they’re pushed further and further away from job opportunities, away from transit public transit and so I think we need to consider all of those things. ADUs are going to provide opportunities for people to be able to come back, there’s so many families that I’ve talked to talk about the only way that their kids are going to be able to live here, is that they give them their house, so that’s a problem and we have to take as many tools in our toolbox as we have possible.”

Moran said that controversy over the issue has been unfortunate, and that the community fallout has revealed a classist vitriol.

“I feel like we’ve been in witnessing some of the vitriol in our communities, talking about it as a case of classism,” Moran said. “Just the absolute aggression that comes around — it’s bad, it’s misplaced. A lot of school systems have done it effectively… We have to ensure to be the world class institution that Alexandria and ACPS is, that we have the best teachers, and this is a way to attract them.”

Campbell said he welcomes all approaches to solving the affordable housing issue, and applauded the School Board for considering colocation on ACPS grounds.

Bagley said that she lived in an ADU when she was in college in D.C. and while she worked as a law clerk.

“I don’t think any of us here, including myself, are looking to limit the space to put kids into classrooms,” Bagley said. “At the same time I share several of my colleagues expression that to foreclose the opportunity entirely when there might be a unique opportunity to house 10 teachers in a property — let’s take it.”

The city has contended with historic floods over the last few years, and improving the city’s stormwater infrastructure has been a major talking point among candidates this election cycle.

Jackson said that the current Council was forced to tackle an issue that had been put off for far too long.

“We’ve got only so much money to do so many projects starting at once, and hopefully some of the rescue plan funds will also be put toward some of those projects as well,” Jackson said.

McPike approved of Council’s doubling of the stormwater utility fee to tackle the city’s flooding infrastructure.

“I think the most important thing we can do is listen to the people who are on the ad hoc committee, who are on the ground bailing out their basements watching their properties flood time and time again, who know what the true scope of the problem is, and make sure that our response meets the moment.”

Moran said that flooding is a catalyzing issue that ultimately got him involved in the Council race.

“I think we also need to take a lead from some of our neighbors in terms of best practices and create a solution and implement it,” Moran said. “D.C. just rolled out a 23-foot-wide tunnel that is literally dug underneath… Think Elon Musk. These are the types of solutions that are possible. Now we have to open our eyes and to ultimately incorporate them, but we have to pay for them as well.”

Chapman — “I’m very glad to be the Council liaison on the advisory group, where we’ve put together a group of activated citizens that are going to work with staff and hold the city accountable for making sure we complete the projects we say we have to.”

Pope asked the candidates whether they supported the recent adoption of a collective bargaining ordinance and whether it should be expanded into protections against disciplining employees.

McPike — “Supporting our organized and union employees of the city is critically important. I think it’s also critically important that as a city, we support unionized and organized workforces that are private employers and that we encourage developers to connect with the unions that represent the building trades in the city.”

Harris says many city employees, like firefighters, are not being paid enough.

“We have to have the ability to allow these workers to be able to talk so they can have some sort of control over the quality of life,” Harris said. “We have to really pay attention to these working people, because these are the people were taking care of our communities.”

Both Jackson and Chapman said that collective bargaining is an ongoing conversation that needs to be conducted throughout the community.

“Overall, council has to have has to be able to hold city staff accountable,” Chapman said.

James Cullum and Vernon Miles contributed to this report