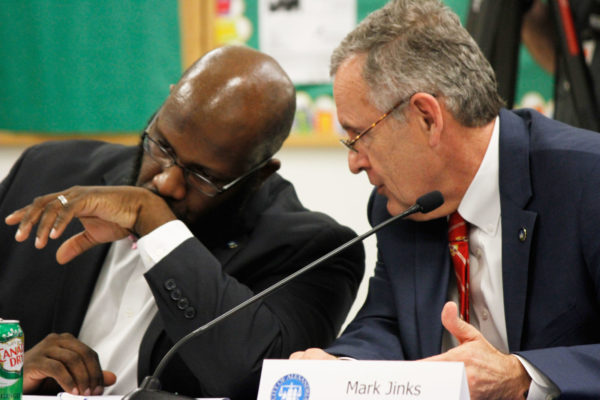 Alexandria is experiencing an affordable housing crisis, city officials say, and that means using school property to try to address the crisis should remain on the table.

School officials, however, are reluctant to rush through plans for housing at schools currently set for redevelopment.

City Manager Mark Jinks said at a meeting last night that he still wants the city’s public school system to evaluate possibilities to co-locate affordable housing options on the grounds of schools slated for renovation.

“The most important thing is looking at the site and saying what’s possible and what’s not,” Jinks said. “Every single unit makes a difference.”

At a contentious joint meeting between city and school officials Monday night, school staff were asked to evaluate the feasibility of adding workforce and affordable housing to two concept plans under consideration for Douglas MacArthur Elementary School before the school board votes on a plan on Feb. 6.

Mayor Justin Wilson said that any plan proposed by staff that would negatively impact schools or their construction timelines should be shelved.

“But if we can have some consideration quickly — it sounds like in the next month or two — let’s see what’s possible,” Wilson said.

School Board Chair Cindy Anderson said that she and her colleagues were unaware that the city was contemplating such measures.

“I think we want to have our ducks in a row on this, but we’re not the housing administration, we’re the school system,” Anderson said. She recommended that the board’s work session with council in March be devoted to discussing the issue.

“I don’t think that rushing through some sort of process at this point is going to really help either the city or the schools. I think it would potentially damage and taint any process going forward,” said Anderson. 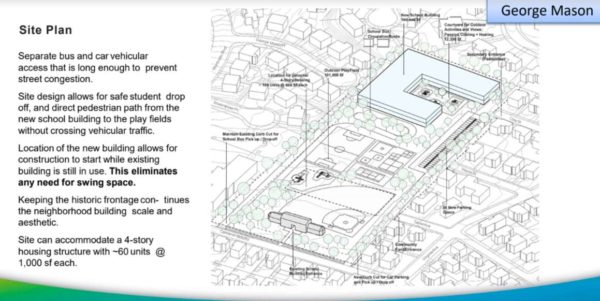 The issue created controversy last week when a feasibility study for George Mason Elementary School was mistakenly released, and included a four story apartment complex with 60 units on school grounds.

The decision about co-locating housing on ACPS property is ultimately up to the school board — the city council can not lawfully determine what goes on school grounds, City Attorney Joanna Anderson said.

Jinks said that any potential plans to co-locate affordable or workforce housing on school grounds will not have a “transformational” change to concepts that the school board approves down the road. He encouraged the school board to go ahead with their vote on MacArthur on Feb. 6 and said that city staff will be working with ACPS staff to determine if there is any opportunity to explore housing options between now and then.

Superintendent Dr. Gregory Hutchings, Jr., apologized for the lack of publicly-available information leading up to the discussion. He said that it will be difficult for the school system to approve a concept plan and then alter it to accommodate housing options.

“I really do think we need to know what that means for us, because as of today we do not have clear guidelines as to how does that work,” Hutchings said. “I feel like there needs to be some more research or some data that we need to collect to determine what that looks like for a school system.”

“The vote next week really is not going to include anything that relates to affordable or workforce housing,” he asserted. “It’s going to solely be around the educational programming and the educational needs of Douglas MacArthur.”

Jinks said that any potential housing on school grounds could be exclusively for ACPS staffers, which, he said, would improve the school system’s retention rate and address concerns about persons who did not work for ACPS visiting onsite housing.

Karl Moritz, the city’s director of planning and zoning, said that every opportunity should be made to work on the issue.

“It is just like school capacity — it’s an enormously expensive issue to try to solve, and so we have to take every tool in the toolbox that we have,” Moritz said.

School Board Vice Chair Veronica Nolan said that the issue of affordable housing is completely lost on her.

“One thing I would love is to just understand the city’s problem with affordable housing,” Nolan said at the meeting. “What is going on in the community?”

Hutchings will speak about the issue at George Mason Elementary School (2601 Cameron Mills Road) on Tuesday at 6 p.m.