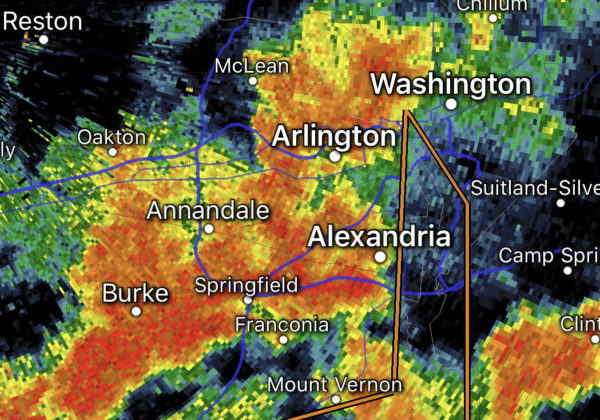 (Updated at 10 p.m.) The Alexandria Fire Department is responding to nearly a dozen calls throughout the city as it remains under a Flash Flood warning until 2:30 a.m.

“Right now we are on 11 different calls for public service for water-related emergencies,” Alexandria Deputy Fire Chief Brian Hricik told ALXnow.”It does not appear that any of them are people trapped in vehicles.” 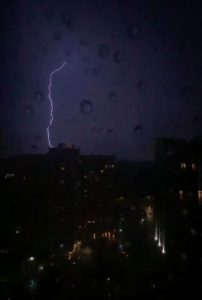 Hricik said that there is light flooding in Old Town, which should become more severe as the tide rolls in tomorrow after 11 a.m. One of the calls was to assist a vehicle stuck in the roadway at Commonwealth and Monroe Avenues in Del Ray, he said.

“We’re extremely busy with calls right now. Everybody’s out on incidents right now,” Hricik said. “There are multiple reports of basements flooding in the northeast area of Alexandria and some in the southwest.”

Alexandria is under a Flood Warning as well as a Flash Flood Watch and an earlier Severe Thunderstorm Warning tonight.

Heavy rain from a line of strong storms is currently causing flooding in the city, according to the National Weather Service.

A trained spotter has reported knee high water and and an impassable street at the intersection of Mt. Vernon Avenue and E. Maple Street, a few blocks from the Braddock Road Metro station.

Flooding has also been reported around the King Street Metro station, and water rescues are being conducted “in many locations,” according to Mayor Justin Wilson. 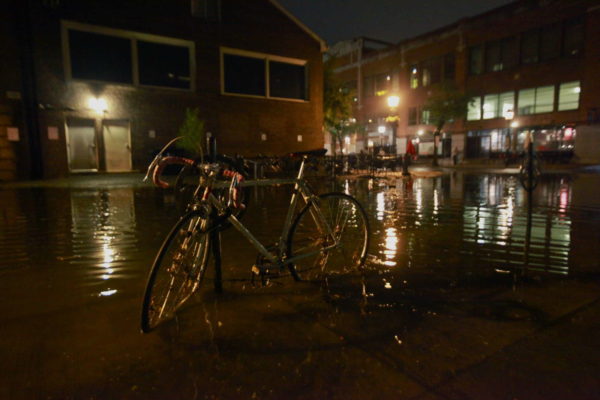 There is an extraordinary amount of rain that has fallen throughout our City.

There is flooding in many areas of the City and @AlexandriaVAFD is conducting water rescues in many locations.

Please stay put and let them do their work.

Do not drive into standing water! https://t.co/ATQq0yBDbQ

More on the warnings from NWS:

* AT 826 PM EDT, DOPPLER RADAR AND INDICATED THUNDERSTORMS WITH HEAVY RAIN OVER THE AREA AND CONTINUE TO DEVELOP. THE RAIN WILL CAUSE FLOODING. UP TO AN INCH AND A HALF OF RAIN HAS ALREADY FALLEN. ADDITIONAL RAINFALL OF ONE TO TWO INCHES WILL BE POSSIBLE.

BE ESPECIALLY CAUTIOUS AT NIGHT WHEN IT IS HARDER TO RECOGNIZE THE DANGERS OF FLOODING.