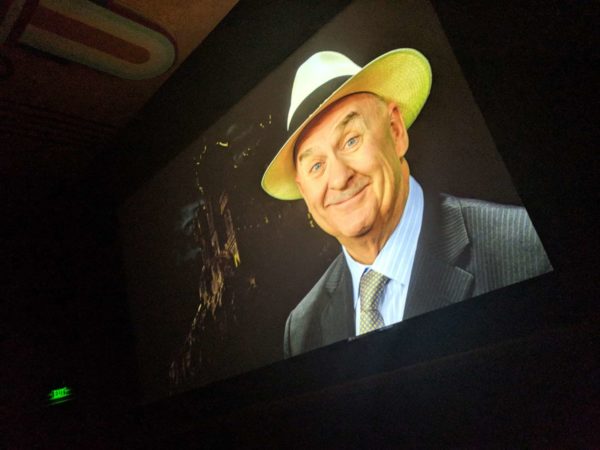 The last movie Arch Campbell saw in the theater was Emma, and that was back in March. The last time the eight-time Emmy award-winning movie critic stayed away from a movie theater for so long was at least 60 years ago, Campbell told ALXnow in a recent interview.

With Alexandria’s movie theaters dramatically adjusted to the pandemic, audiences are forced to watch movies and shows on their phones and at home. With the recent shuttering of the Regal Potomac Yard and the AMC Hoffman Center 22 remaining temporarily closed, pickings are slim for Alexandria movie lovers.

Still, ALXnow has found that developments are currently underway regarding a drive-in movie theater in Alexandria, although details are just starting to emerge. Campbell, a native of San Antonio, Texas, moved to the D.C. area in the early 1970s. He spent nearly four decades covering cinema at NBC, NBC4, WJLA-TV News and News Channel 8.

He’s currently thinking about writing his life story, but doesn’t want it to be 300 pages of name-dropping. After all, Campbell has interviewed some of the world’s most famous movie stars over the years, from Robin Williams to Elizabeth Taylor.

These days the 74-year-old Campbell can be found in his D.C. home with his wife, Gina Gilland Campbell, and watching a number of long-form TV shows on Netflix.

Will he ever go to the movies again, or for that matter will anyone?

ALXnow: When was the last time you went so long without going to a movie theater?

Campbell: That’s interesting. It must have been when I was a young teenager. It’s been about 60 years.

ALXnow: Have you ever been starstruck?

Campbell: No. If you’re starstruck you’re not going to get anywhere. I would never ask for a picture or an autograph, because that changes the exchange between me and them. I try to be as professional as possible. Over the years I became less and less starstruck.

I think that the last time it happened was when I interviewed Walter Cronkite, who was the biggest star on television at the time. One of the questions I asked him was, “What would you ask you if you were me?” He thought that was funny.

ALXnow: Any plans to go back to the movies anytime soon?

Campbell: I’m 74. I’ve got asthma. I’m having to really be careful with this virus going around. So I have really tuned into Netflix and HBO.

ALXnow: What what was that first movie you ever reviewed?

ALXnow: What are you watching these days?

Campbell: I’m watching this show, “A French Village.” It’s told through the eyes of the people in this village during World War II. It’s fascinating. You’re glued to the set because you have to read the subtitles.

The character development in these long-form TV shows is so much better that I find it really hard to watch a new, two-hour movie. You will have exceptions, like Quentin Tarantino’s “Once Upon a Time in Hollywood,” which I just loved.

ALXnow: Then what is the future of movies, if a movie man like yourself doesn’t watch them like he used to? When was the last time you went and saw a good romance or a western at the movie theater?

Campbell: It’s a good question. This is just a guess, and this is from talking to people who are like me trying to figure out what’s going on. Blockbuster Video changed everything and we’ve been dealing with that for nearly a half-century. So, bringing movies home is not a new issue.

I have a feeling that all that’s going to be left is the big, giant movies, like “Tenet,” or “The Avengers” and “Wonder Woman 1984” (which was partially filmed in Alexandria). And then you’re going to have on the other side some very, very small movies showing in indy theaters. You’re never going to see movies like “Being There,” which is one of my favorites, in theaters again.

The other thing that’s going on is that nobody can make any movies right now because of the virus. Nothing is in production. You can’t put a group of people into the studio or even outside next to each other talking.

ALXnow: Did movies used to mean something different? If you were just starting out in your career right now, would you be able to make it today?

Campbell: No, I don’t think so. The world is different. If I was starting today I’d have to do something else, like write for television. Or I might have gone into real estate in San Antonio or stand-up comedy.

For people of my generation, in the late 1960s, particularly with “The Graduate,” movies were the coolest thing you could do at that time. And they only played in theaters. Once it left the theater, you weren’t going to get to see it again. If you wanted to be cool you went to the movies, because they were the cool, perishable thing.

ALXnow: Look into your crystal ball. What will the moviegoing experience look like in 50 years?

Campbell: I would say the moviegoing experience is going to be some kind of device at your home, or some kind of mobile device that can be easily handled. It boggles the mind.