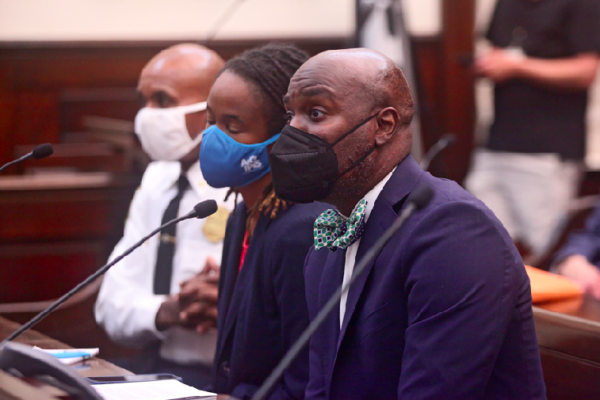 After significant outcry from a school system concerned about weapons in schools, the Alexandria City Council took a dramatic 4-3 vote around 1 a.m. this morning (Wednesday) to temporarily return school resource officers (SROs) to two middle schools and Alexandria City High School until the end of this school year.

Councilman John Taylor Chapman was the lone vote to reverse course, going against Vice Mayor Elizabeth Bennett-Parker and Councilmen Canek Aguirre and Mo Seifeldein, who voted to keep away SROs.

“I’ve seen the smile of kids that do not fear adults in school, whether that’s law enforcement or not, and that’s what we can do,” Chapman said. “I would challenge all of us to see that future and make that change.”

SROs are police officers assigned to Alexandria’s high school and middle schools. The program started in 1997. Unlike security staff, which remain at the schools, SROs carry weapons and can fulfill the regular duties of a police officer. The SRO program has been under scrutiny for years, particularly after an officer fired his weapon in George Washington Middle School, but the push to remove police officers from schools ramped up after nationwide protests against police brutality last year.

School Board Chair Meagan Alderton and Superintendent Gregory Hutchings, Jr. said that the school year so far has been punctuated by violent incidents, including a recent shooting of a student at the McDonald’s at the Bradlee Shopping Center, a student being arrested with a gun on ACHS grounds, a student being arrested with a knife at ACHS, a firecracker incident that led to the evacuation of a football game, brawls inside ACHS and George Washington Middle School and more.

Alexandria City High School Executive Principal Peter Balas begged Council to bring back SROs, and said that students are literally sending warning shots. He also said that gang initiations with fighting are taking place. Balas said that many of his 4,370 students have been traumatized by the pandemic and social/political upheavals over the last couple of years.

City Councilman Mo Seifeldein introduced the measure in May, redirecting $800,000 from the SRO program toward student mental health resources. Seifeldein said he was heartbroken by Council’s latest decision.

“I am truly heartbroken, I think for the first time, about a discussion in our city,” Seifeldein said. “I cannot emphasize enough how sensitive this discussion is, and the way this has been discussed… has not been the best way of presenting it to the public. I am heartbroken, but I am looking forward to the path my colleagues have worked so hard on charting.”

Councilman Canek Aguirre acknowledged that Council’s May decision was messy and that he was dismayed and frustrated by the position. Aguirre wanted more data from the school system to show a direct correlation between the SROs being gone and an increase in violence, and said that it can also be the result of a shared school-wide lunch period at ACHS, a staffing shortage and security officers not doing their jobs.

“My issue here is that you are trying to draw a direct correlation between the removal of SROs and everything else that’s been going on,” Aguirre said.

Aguirre said much of the blame for how the situation ended up lay on the School Board, which he accused of not properly planning for the removal of SROs.

“I’m dismayed and frustrated that we’re even in this position,” Aguirre said. “Schools knew that with the new lunch period and everything that was going to happen we were going to have problems. Instead of getting new bodies into the building, they decided to pay for overtime for police officers, which is time and a half. Instead of coming to Council and saying, ‘You guys made your decision, we really need these additional bodies, we’re having trouble finding the money now before the school year starts,’ I would have said ‘Yes, 100%. City manager, get that money ready.'”

Councilwoman Amy Jackson said she’s been calling for the reinstatement of SROs since the defunding decision was made in May.

“[The schools] have asked for help and it is our job to help,” Jackson said.

“I’ve been up here 11 years I can’t think of a bigger waste of my time than the last three hours,” Wilson said. “I thought we were going to have a productive conversation about how we move forward in our community about a problem we’re hearing about from far too many people in our community about, frankly on both sides of the SRO decision. We had a discussion where we’re all trying to score points on an issue decided in the spring. I’m sorry that we had to do this, quite honestly.”

Wilson called the process “horrific” and shames the city’s leadership.

END_OF_DOCUMENT_TOKEN_TO_BE_REPLACED

More Stories
King Street pedestrian zone meets with enthusiasm from City CouncilAsk McEnearney: When I fall in love with a house, should I discuss it with my agent while in the home?