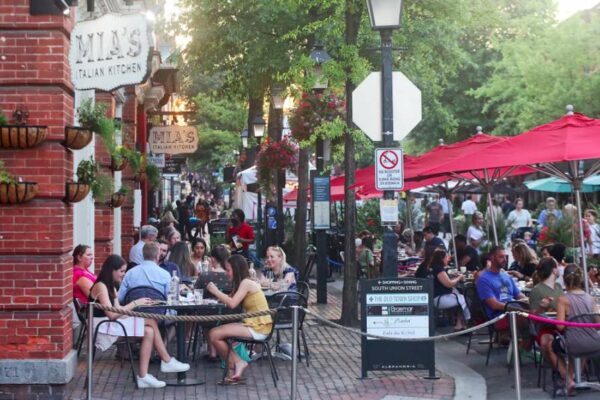 It was barely a footnote in the six-hour City Council meeting, most of which was consumed with a tense discussion on School Resource Officers, but towards the end City Council meeting last night the group expressed widespread support for permanently making the 100 block of King Street a pedestrian zone.

The closure of the 100 block of King Street into a pedestrian zone was an idea that Mayor Justin Wilson and City Councilman John Chapman spearheaded before the pandemic, but was fast-tracked to benefit local restaurants and businesses that needed the outdoor space for social distancing. The closure has been popular with local businesses and the community at large, a survey put out by the city indicated.

The primary criticism of the closure has been the potential impact on Captain’s Row, a cobblestone section of Prince Street parallel to the proposed pedestrian zone. Local residents expressed concern that the closure of the 100 block of King Street could put more wear and tear from the added traffic and parking on the street’s historic cobblestones. At the meeting, Vice Mayor Elizabeth Bennett-Parker asked about the Captain’s Row impact, but staff said data collected from over the last year suggests that traffic volumes have not notable increased on Prince Street — though it’s worth noting that much of the time since the pedestrian zone has opened has been anything but typical circumstances.

Still, at the Council’s urging, staff said on Saturday they would present options for how to alleviate the potential stress on Captain’s Row.

“I think specific to parking conditions, I think a lot of that is coming more from the very successful waterfront restaurants and less from the 100 block of King,” Mayor Justin Wilson said. “It probably demands a response and I think we should definitely look at what we should do. There are options we can put into place shortly.”