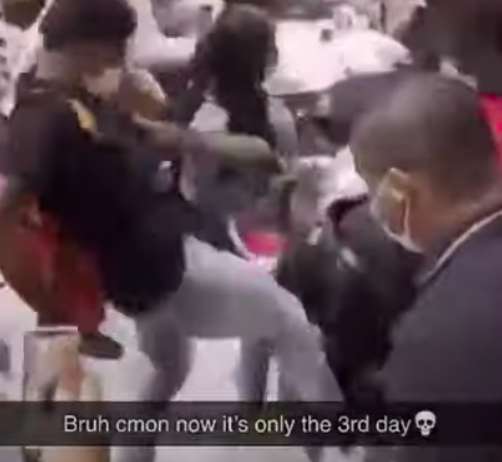 A video has surfaced of a brawl Thursday (August 26) in the cafeteria of Alexandria City High School (ACHS). While the police weren’t called, it was one of two fights broken up that day, according to sources.

“It was a big fight,” said a witness. “It started with two people, and then more than 10 people jumped in.”

In the video, security guards and staff are shoved around in the cafeteria of Virginia’s largest high school, and one security guard falls to the ground as she races to break up the melee.

“The school administration is aware of this and has handled the incident, following standard protocols,” ACPS School and Community Relations Chief Julia Burgos said in a statement to ALXnow.

The police have not been called regarding any fights since school started on Tuesday, Alexandria Police senior public information officer Amanda Paga told ALXnow.

“We have not been called for any fights,” Paga said. “The school is patrolled regularly as part a Patrol officer’s assigned beat.  APD will respond to all calls for service when 911 is called.”

Some parents attribute the violence to the absence of school resource officers.

“This was going to happen,” an ACHS parent told ALXnow. “Take away the police from inside schools and you’re going to see people get hurt.”

The Alexandria City Council voted 4-3 in May to redirect nearly $800,000 in SRO funding toward student mental health resources, a vote that has since been decried by the School Board. The reallocation took away a police presence inside Alexandria City High School, Francis C. Hammond Middle School and George Washington Middle School.

None of the Council members who voted to defund the SRO program commented on the fights at ACHS.

Mayor Justin Wilson said he is happy to discuss the issue with school officials and the police. Wilson voted against eliminating SROs, and previously said he was “dismayed” by the deteriorated relationship between Council and the Board because of the decision.