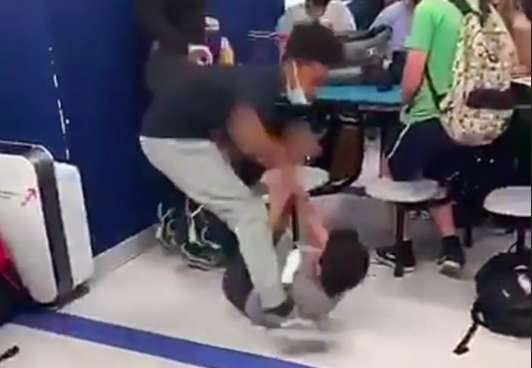 A number of recent student fights at George Washington Middle School have been posted on Instagram.

The videos have been taken by children at the school and show teachers and other students breaking up incidents. They have been posted by an Instagram user named gwmsfights2022.

The first video was posted on September 4, and the videos were taken this school year, as the school appears to be operating at capacity and students are wearing face masks. The most recent video was posted five days ago.

Alexandria City Public Schools is aware of the posts and reported them to Instagram. The school system said in a statement that, while there are no police on school grounds, the security situation at the school is under control.

“School administrators have addressed any incidents this year in accordance with standard protocols for disciplinary issues,” ACPS said in a statement. “School safety and security is a top priority for our schools. ACPS leadership works with our security team to maintain a safe environment for students and staff in our buildings. Student involvement in incidents is investigated by school administration to include witnesses and handled using a tiered system of support for all students involved.”

ACPS would not say how many students have been suspended at the school this year.

Many believe the fights are the result of no school resource officers within Alexandria City Public Schools. In a move that was decried by the School Board earlier this year, City Council defunded SROs in a 4-3 vote.

There was a protest on SROs earlier this week outside City Hall, as several violent incidents have alarmed parents and political candidates. In a recent interview with ALXnow, School Board Chair Meagan Alderton also said that she wants to salvage the student-police relationship.

“Not sure if it’s the lack of SROs or the fact that we kept the public school kids out of school for two years, but neither one of those decisions seem particularly good to me right now,” an ACPS parent told ALXnow.

This is not the first of fighting videos that has surfaced since school started on August 24. ALXnow recently posted a video of a brawl at Alexandria City High School.