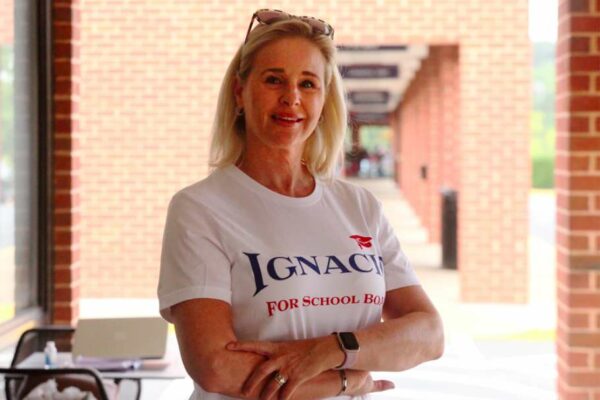 Former Alexandria City Public Schools administrator Tammy Ignacio says her 30-plus years of experience will help take up the slack since six of the nine members of the School Board aren’t seeking reelection.

“I am well aware of the complexities of running the school system,” Ignacio recently told ALXnow. “I’m excited for the work. I feel like I still have work to do. I think what I can bring to the table is expertise in living the life of an educator and as a parent in the school system.”

Ignacio’s career in Alexandria began when she was hired as an administrative assistant in 1999 by former T.C. Williams High School (now Alexandria City High School) principal John Porter — a role she held for 11 years. She was then the chief administrative officer for ACPS from 2010 to 2013, ACPS chief of staff from 2013-2018, and officially retired last month after three years as the administrative lead for specialized instruction for high school students under ACHS Principal Pete Balas.

Ignacio gave the school system high praise for its operations throughout the pandemic. She also said that she wished students with severe disabilities, autism and emotional disabilities were able to go to school four days a week instead of two during the 2020-2021 school year.

“I felt like we did a damn good job,” Ignacio said. “We really did push to get those children back not two days a week, but four days a week. They needed to be back in the building. It was heartbreaking for parents. It was a very difficult time for everyone, including myself as a parent being home with a senior that wasn’t living his senior year. But we were really instrumental, I felt, that the school system was trying to get our special needs students back as quickly as we could.”

She continued, “I feel as though it is easy for people to sit back and criticize what we did, but we never stopped working. The leadership at T.C. and Pete (Balas) in conjunction with the leadership at Central Office — it wasn’t normal school day hours. We were working from early in the morning and then still having conversations at midnight, still reaching out to parents struggling at home with their children. We also had to get our staff vaccinated.”

Ignacio, who is married to Alexandria Sheriff’s Deputy Victor Ignacio and has five children out of high school, said that colocating affordable housing should be kept away from school developments, and that City Council’s recent elimination of the School Resource Officer program was “heartbreaking” and sends a bad message to the community.

“You had a group of people (Council) who either don’t have children in the school system, or have children too young to be in the school system that arbitrarily made a decision without taking into consideration what the people who are leading those buildings deal with,” she said. “Anytime you put 4,000 teenagers together, police are needed. I’m talking threats against the principal, threats against teachers, domestic violence situations. It’s a city within a city, so anything that you’re dealing with outside in the community, you can rest assured that you’re going to see it and have to address it inside the school system.”

A native of West Virginia, Ignacio has dual Master’s degrees in education and educational administration and supervision from George Mason University.

Ignacio has her work cut out for her in this election, and plans to knock on thousands of doors starting this month. The District B candidate is running against six other candidates for the three open slots, against former School Board Member Kelly Carmichael Booz, Deborah Ash, Ashley Simpson Baird, PreeAnn Johnson, Bridget Shea Westfall and Ricardo Roberts.

“I’m going to hold the superintendent’s feet to the fire, and am not afraid of holding difficult conversations,” Ignacio said. “You can trust me to be a part of your school board, and I will continue to give and serve as much as I have for decades in Alexandria.”