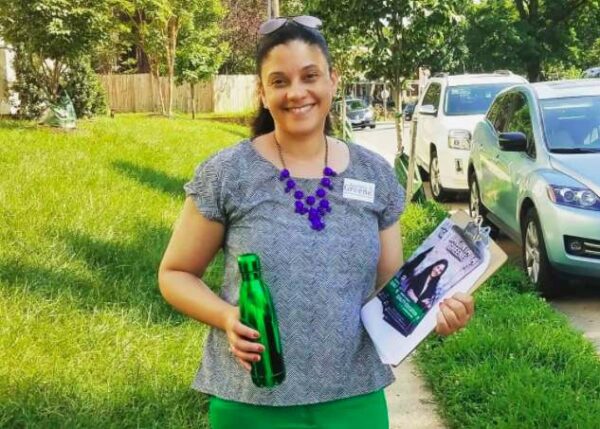 School Board Member Jacinta Greene thinks the history of race relations should be taught in Alexandria City Public Schools.

“Systemic racism and race relations should be taught in schools,” Greene told ALXnow. “What has happened to Black people and minorities in our country has been deplorable and when you don’t teach history, that’s when it repeats itself.”

Greene doesn’t necessarily think Critical Race Theory should be taught, but says ACPS students should get a primer on history that hasn’t been whitewashed.

After a grueling three year term beset by controversy and the steady deterioration in the relationship between the Board and City Council, Greene is one of three incumbents running for election this November. She said she is not opposed to the idea of taking a leadership position, since Vice Chair Veronica Nolan is not seeking another term, and that she’s running so that the Board maintains a semblance of institutional stability.

“I’m running for our kids,” Greene said. “I’m doing it for teachers because they deserve strong leadership. The pandemic has been hard on all of us. I’m sure that did play a part in some [other members not running for reelection]. I’m a strong believer of running for at least two terms. I don’t think one term on the School Board does justice to our school system.”

After a term that included the slow easing of COVID restrictions, the renaming of T.C. Williams High School and recent elimination of the School Resource Officer program by City Council, Greene faces a contentious election.

Greene is running in District A along with Board Member Michelle Rief, while one seat is being vacated by Christopher Suarez. The two incumbents will face off against former City Councilman Willie F. Bailey, Aloysius Boyle and D. Ohlandt.

Greene said that her heart sinks when thinking of the past year-and-a-half. She’s a marketing consultant for her day job and lost all but one of her overseas clients, which helped keep her afloat, all while the school system shifted to a virtual format for the remainder of the 2020-2021 school year and then a hybrid model in 2021.

“It’s overwhelming,” she said. “Something comes over you when you think about all of what we’ve been through. Everything was totally turned around and upside down. I’m very proud of our School Board and school system on being able to pivot and to be able to provide free food to families across the city and provide the access to the online schooling.”

But, she said, ACPS wasn’t creative enough in reopening its in-person instruction to kindergarten-to-second graders and students with the greatest needs.

“I just think we needed to bring them back faster,” she said. “It needed it needed to be more creative in doing it, with out of more out-of-the-box thinking.”

Greene has a goal of knocking on 6,000 doors before election day, and said that learning loss recovery will be her top issue.

“Students need to be assessed to make sure priorities are in place for them to recover,” she said.

She also said that ACPS land should not be used for affordable housing, and that the Board’s relationship with City Council will need to be mended after a number of contentious votes, including Council’s elimination of School Resource Officer funding.

“All school land should be used for schools, and I do not believe in putting housing on school land,” Greene said. “We’re going to have to get very creative, because we’re going to need schools in the near future as we continue to grow and deal with capacity issues.”