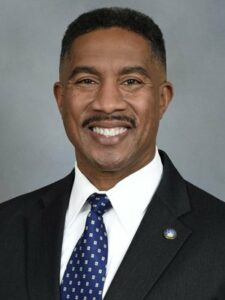 Bailey, an Army veteran and Deputy Chief of the Office of the Fire Marshal for the Fairfax County Fire and Rescue Department, was elected to the Alexandria City Council in 2015. Over the next three years, Bailey was one of the Council’s prominent advocates for greater emphasis on affordable housing and supporter of a controversial 1% increase to the city’s meals tax, and lost reelection in 2018.

Bailey is also locally known for some of his philanthropic work; as founder and president of Firefighters and Friends to the Rescue, a member of the Board of Trustees for Operation Warm, and a member of the Carpenter Shelter board and Alexandria Redevelopment Housing Authority.

Bailey said much of his non-profit work in Alexandria has focused on improving the lives of local children, and his first instinct in 2015 had been to run for the School Board before ultimately deciding to run for City Council.

Bailey said he will run in District A against Aloysius Boyle and incumbents Jacinta Greene and Michelle Rief, though no official paperwork has appeared on the registrar’s website.