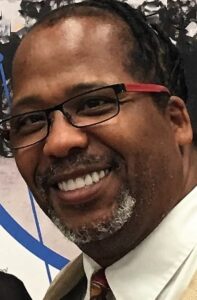 Bill Campbell knows he probably isn’t going to be your first choice in the June 8 democratic primary for the Alexandria City Council.

It’s a crowded race for the slate of candidates, which in the heavily blue Alexandria is almost heavily favored in the November general election.

“I’m really encouraging people, after you’ve voted for all of the other reasons, friends or neighbors, your last third, fourth, fifth or vote — I think I end up in the top six,” Campbell told ALXnow.

Campbell was elected to the School Board in 2012 and reelected in 2015, but lost his reelection bid in 2018. Since then, he retired as a mechanical engineer, stayed involved in city government, and says he’s ready to fully jump back in.

“Biggest thing in my life has been: I’ve retired and my wife has retired,” Campbell said. “From a timing perspective, that’s been really good. We’ve been able to get our bills together, relax, and all our kids are out of school and in the workforce. I’ve joined the Commission on Aging, which is interesting because when i first came to the city I joined the Early Education Commission, so it’s kind of come full circle.”

In the years since he lost reelection, Campbell said he’s been happy to see the School Board-City Council relationship steadily improving — though that, too, has come under some fire from other candidates for mainly occurring behind closed doors and has seen some recent strain with questions of budget allocation.

“The most significant change has been the improvement in relationship between schools and council,” Campbell said. “We made a goal of better explaining school operations and city operations and made it a point for superintendent to improve relationships with city manager. When I first came to Alexandria there used to be huge debates over funding: fully fund schools and stuff, with people for and against Council. For the last three-four years, we haven’t had that. It’s been a good understanding and the City Council has done what they can to fully fund schools.”

Candidates in the City Council race run a full spectrum of opposition or support for current city procedures. Campbell fells pretty heavily towards the end of continuing the status quo of the last few years.

“I would approach these in the very similar manner that it’s been approached,” Campbell said. “I think it’s wrong not only for our citizens, but certainly for candidates to step up and say, ‘Oh, I would vote differently.’ There are so many things in considering the vote. We’re considering schedules and staff work and grants associated with something. There are so many things you have to consider prior to a vote, that I think it’s wrong to go back and say ‘I would have voted differently.’ I wouldn’t want anyone to vote for me if I felt like that’s something I would do. I wouldn’t want people to second guessing me on my board work.”

From his time on the School Board, Campbell has already faced a share of public second guessing. Primarily, Campbell was at the heart of a controversy involving the firing of T.C. Williams boy’s basketball coach Bryan Hill.

Hill was fired after driving a player — reportedly one of Campbell’s sons — home after practice without the parent’s permission. Parents on the team were vocal in support for Hill in the aftermath, saying in School Board meetings that the punishment wasn’t justified by the offense, but Campbell and ACPS were silent and refused to comment at the time.

Years later, Campbell still maintains some silence on the issue, and said it has been misrepresented.

“With elected officials there are certain personnel matters that you just can’t publicize,” Campbell said. “There’s often more than two sides of a story. It would have been wrong then and now to say any specifics, because it was a personnel matter, but I would encourage people to speak with people who were more familiar with the various things that occurred, and how things were handled.”

One of the more concerning accusations at the time was that Campbell forced the firing because his son was on the basketball team, but Campbell said that isn’t the case.

“It’s one of those things where you want to say so much,” Campbell said. “One thing where I think people are way off: Nothing different would have occurred if I didn’t have anybody on the basketball team. So anyone at all who implies that this had something to do with my boys or playing time, that’s just categorically not the case.”

Campbell says he’s been hurt this year by not being able to go out, knock on doors, and explain his positions to people.

“It’s different this year,” Campbell said. “This is my fifth campaign here in the city. It’s just one of these things where you just don’t know, you can’t interact the way you can normally. People just aren’t comfortable [with door-knocking] — and they shouldn’t be. So this campaign is going to be a lot of social media stuff, a lot of word of mouth, sharing information among groups. It’s interesting and difficult.”

Campbell said the big message he’s pushing is equity, particularly when it comes to ensuring equal access to housing in Alexandria.

“Probably our biggest challenge is around affordable housing, which to me is one of the most critical equity issues,” Campbell said. “If we’re really serious, and not just saying ‘diversity is our greatest strength.’ If we’re serious about that, we have to maintain affordable housing at serious levels. That equates to diversity in so many levels. Our city talks a lot about that, our value in diversity, but to me it’s very real.”

The push for equity is somewhat complicated by Alexandria’s new entanglement with Amazon — which not only has come under fire for abusive workforce practices, but is likely to drive up housing prices in currently-affordable islands like Arlandria.

“That’s the incredible tug of war between compassion and capitalism,” Campbell said. “Amazon will bring in good, solid paying jobs. At the same time, not everyone is going to have jobs that pay them six figures. At the same time, a lot of the housing that has been replaced had to be replaced… It will continue to be a challenge, we will continue to have folks that live here and live in million dollar houses that just don’t want much change at all, and then there are those living right on the edge in rental properties they can barely afford, and they want to keep that as long as they can. We want to keep those folks, but it gets tougher and tougher. I’m willing to fight as much as I can , but there are obvious tradeoffs.”

Campbell said he’ll help navigate that issue if elected to the City Council as one of six members — albeit if not as anyone’s primary vote.

“Equity, Experience, and Excellence are my three areas of focus,” Campbell said. “I want people to use all six of their votes. I want folks to take a look at ‘I’m this or that and I’ll vote for this person, but I hope with two or three votes left, you should look at who has the most experience.'”