The year 1872 was big for Republicans. President Ulysses S. Grant won his second term in office, and it’s also the last time that Alexandria elected a Republican as mayor.

There have been only three Republican mayors elected in the city’s history, according to the Office of Historic Alexandria.

“Please keep in mind that before the Civil War, the majority of Alexandria’s mayors were either Federalists or Whigs,” City historian Daniel Lee told ALXnow.

Lewis McKenzie was the first Republican mayor of the city, performing as the acting mayor from 1861 to 1863 while the city was occupied by the Union. McKenzie later served as Congressman for Virginia’s 7th District. Charles A. Ware was the next Republican mayor, and served from 1863 to 1866.

Alexandria underwent a deep depression after the war ended. The city was filled by refugees and policed by an army garrison, and was governed under military rule from 1868 until 1870 — when Virginia was formally readmitted to the Union. While not a Republican, conservative Mayor Hugh Latham was removed from office (after serving two years)  in 1868 along with all other municipal officers throughout the state as part of the federal Reconstruction Acts.

“Because of the orders, no municipal elections were held in Alexandria in March of 1868 or 1869; this was the first time in the city’s history that elections had been canceled,” the City notes. “Former Confederate soldiers and citizens who had voted for the Ordinance of Secession were disqualified from holding office. Indeed, candidates who aspired to public office were required to take an oath swearing allegiance to the United States and its Constitution.”

The last Republican elected mayor was William Berkley, who was installed by the military in 1868, and then was formally elected in 1872 before resigning that year to be the city’s postmaster.

While much attention has been paid to the ongoing Democratic primary for the City Council election, a small but growing pool of Republican challengers for the general election has gotten slightly larger with the addition of Darryl Nirenberg.

Nirenberg, a partner with the law firm Steptoe & Johnson in D.C., joins Mayoral candidate Annetta Catchings as the Republican candidates currently filed for the local elections.

Last year, Nirenberg wrote in a letter to the editor in the Alexandria Times challenging Mayor Justin Wilson’s assertion that cultural white supremacy was still prevalent in Alexandria and Virginia. Nirenberg also challenged Wilson over issues of density, which has become a rallying cry for opposition to incumbents this election– in both general election challengers and within the Democratic primary.

“The same crowd has controlled our city for decades,” Nirenberg wrote in the letter. “They have rigged the system so those with whom they fundamentally disagree can’t get elected to anything. Instead of taking responsibility, the tactic appears now to claim that to make things right, a radical ‘urbanist’ agenda for which there is no electoral mandate must be imposed on the city.”

Earlier this month, Nirenberg made an announcement for his campaign on the Bring Integrity Back to Alexandria Facebook group, which is non-partisan but focused around opposition to projects like the Seminary Road diet and the Taylor Run stream restoration.

“Thanks to the administrators and those who post here for raising and assessing the issues before our city,” Nirenberg said in his post. “The range of well argued positions posted here have reinforced for me that now is the time for our City Council to put aside divisive policies such as promoting density in the midst of a pandemic, road diets, housing on school grounds and paving over our green space, and instead, look for ways to build consensus on major issues and pull together our city. That’s why I am running, and hope you will visit my website to sign up, volunteer your time, request a yard sign and a bumper sticker, and throw in a contribution.”

Under the issues listed on his site, Nirenberg expressed opposition to co-locating housing on school grounds and road diets.

Nirenberg could not be reached for comment on this story. 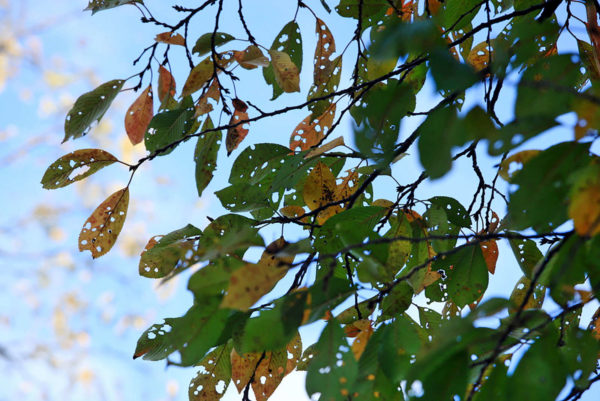 Alexandria GOP Chair Says Residents Fear Being Republican — “He said that the local Republican chapter is in full support of Donald Trump. He believes that Republicans in Alexandria may be silent but significant… He shared that many local Republican supporters fear repercussions if they make their opinions public.” [Alexandria Living]

Apartment-Hotel Company Leases Old Town Building — “Sonder USA Inc. has applied with Alexandria to operate the apartment-hotel coming to 805 King St. The 9,700-square-foot, four-story building, owned by North Carolina’s Asana Partners, has a Warby Parker eyeglasses boutique on the ground floor. Renovations are underway to convert the offices around and above that store to residential units, all with small kitchens, ranging from 225 square feet to 527 square feet.” [Washington Business Journal]

Living Legend James Henson Honored — “On Sunday, Sept. 27, the newest Living Legend of Alexandria, James Henson, received quite the surprise. Friends presented him with his official Living Legends portrait. They gathered outside the Departmental Progressive Club (DPC) to walk to his home.” [Zebra]

Today’s Weather — “Sunny, along with a few afternoon clouds. High 73F. Winds NW at 5 to 10 mph.A steady rain in the evening. Showers continuing late. Low 53F. Winds light and variable. Chance of rain 70%. Rainfall near a quarter of an inch.” [Weather.com] 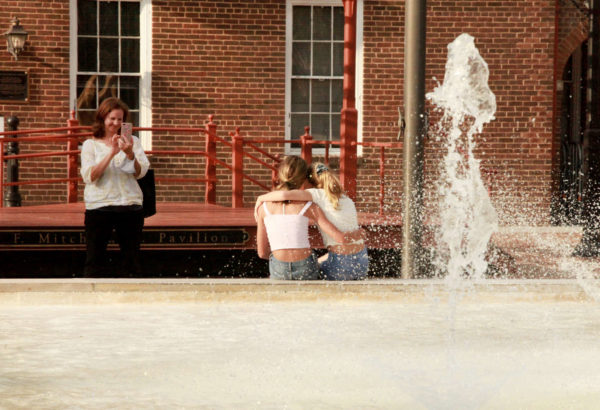 Alexandria Woman Finds Missing $100K Lottery Ticket — “Four months ago she purchased a ticket using some of her favorite numbers, 2-14-15-17-21, and matched all five winning numbers on March 1, but she only just discovered that fact when she cleaned out her purse recently.” [Zebra]

Mayor Gets Sneak Peek at ‘The Spire’ Affordable Housing Complex — “Great opportunity to check out AHC Affordable Housing’s latest housing project in the City under construction and arriving early next year. ‘The Spire’ will be 113 units serving 40% – 60% of Area Median Income.” [Facebook]

Ascend Cycle Wins Northern Virginia Magazine Award — “Did you hear?? We won the Best of NOVA: Cycling Studio 2020  ​We are SO excited to win this honor for a 3rd year in a row!” [Facebook]

Firefighters Raising Funds With Virtual Boot — “Ordinarily at this time of year, the men and women of Alexandria Firefighters, Inc. IAFF Local 2141 would be out around our community working to ‘Fill the Boot’ in support of Muscular Dystrophy Association. Join me in helping them Fill the ‘Virtual’ Boot this year!” [Facebook]

New Job: Virginia Quality Mental Health Specialist — “ACPS serves as a Local Coordinator for the City of Alexandria and is a part of the VQ Northern region. The VQ Mental Health Specialist will increase caregivers/teachers/directors use of strategies and practices to promote the social emotional development of infants, toddlers, and preschool-aged children.” [TopSchoolJobs.com] 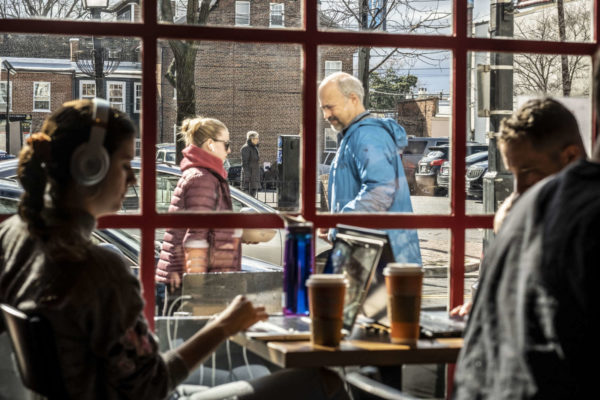 School System Gives Parents Update on Coronavirus — “We are finalizing our operational and instructional plan should we need to close for any length of time… Anyone with a fever should stay home from school for at least 24 hours after the fever has gone without the use of medication. Individuals who need medical care should contact their primary care physician. Anyone who has come into contact with anyone confirmed with coronavirus should contact the Alexandria Health Department. Potentially impacted schools will be thoroughly cleaned overnight.” [ACPS]

CVS to Waive Prescription Delivery Fees — “CVS Health announced Monday that beginning immediately, the drugstore chain will ‘waive charges for home delivery of prescription medication,’ including locations in Alexandria… With the Centers for Disease Control and Prevention encouraging people at higher risk for COVID-19 complications to stay at home as much as possible, this is a convenient option to avoid coming to the pharmacy for refills of prescriptions.” [Patch]

Beyer to Self-Quarantine After Exposure — “As coronavirus continues its rapid spread, Rep. Don Beyer (D-Va.) is among those self-quarantining after coming into contact with someone who had the disease. Beyer announced Tuesday night that he recently dined with a friend in D.C. who later tested positive for COVID-19.” [ARLnow]

NOVA Teen Book Fest This Weekend Cancelled — “Our priority, as a festival, has been to create a transformative, positive and safe environment for all of our participants. With the recent spread of COVID-19 to the Northern Virginia, Maryland and DC Metro areas, we are unable to ensure that all of our authors, volunteers, exhibitors, staff and attendees will be safe at the festival this weekend.” [NOVA Teen Book Festival]

D.C.-Area Coronavirus Cases Rise — “Six new coronavirus cases were announced in Maryland and Virginia on Tuesday, and officials said several universities in the region will temporarily halt in-person classes in an effort to stop the virus from spreading. Twenty-two coronavirus cases have now been reported in the region.” [Washington Post]