Discussion of crime and policing took up much of the forum, marking one of the few instances where the candidates challenged each other directly. During a discussion of the opioid impact on Alexandria, Catchings put the blame for the issue on drugs on border control and drugs imported from China.

“I’m not going to tap dance around this issue, we know why we’re seeing an influx in this,” Catchings said. “It’s borders that are porous, basically open, those drugs are coming in from that direction and from China. I have the benefit of traveling as a flight attendant. I listened to people talk about their cars being stolen and used for drug runs. It’s become part of our norm, now, something we’ve come to expect. This is a federal problem, it needs to be addressed at the border to reduce the drugs on our streets so it doesn’t overwhelm the municipalities; the departments we have here. It needs to be a partnership at the federal level.” 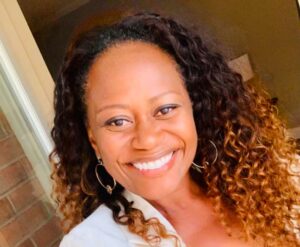 In one of the few back-and-forths of the evening, Wilson blasted Catchings over her characterization of the epidemic.

“Suggesting border policy has some impact on opioid abuse is not only completely inaccurate and ignorant,” Wilson said, “it’s also incredibly hateful.”

While the opioid crisis is complicated and multi-layered, with 80% of heroin addiction starting with abuse of medically prescribed opioids, one of the deadliest drugs on the market today is fentanyl — 90% of which comes to the United States from China, according to The San Diego Union-Tribune. And while heroin does predominately come to the United States via Mexico, that’s usually through legal ports of entry.

“I’m not going to sink to that level,” Catchings answered. “I’d just like to attack things with basic facts. I’ll let my comment rest as it is… For my opponent to say it’s ignorant, he’s turning a blind eye, just like he does to flooding and crime.” 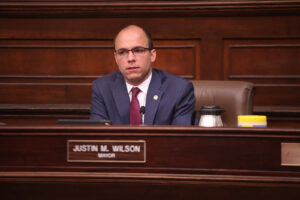 The city has struggled for years to get a body camera program running for the police department. Wilson said that should be changing with the city receiving funding from the federal government for a pilot program as part of Congressman Don Beyer’s body-worn camera legislation.

“Cameras are the cheap part, staffing is a considerable expense,” Wilson said, “[but] I’m committed to bringing body-worn cameras to Alexandria.”

Catchings said Alexandria has seen a significant uptick in crime during Wilson’s mayorship, though Wilson pointed out violent crime nationwide has gone up over the last year for myriad reasons, not the least of which was the pandemic. Wilson also said the city should consider non-policing alternatives and investments “upstream” to help prevent crime.

Regarding those upstream investments, Wilson and Catchings also sparred over the guaranteed basic income program being implemented as part of the American Rescue Plan funding.

“In the pandemic, we saw those who live on edge of the poverty level were hit hardest,” Wilson said. “One of our goals was to create additional resiliency in our community. It’s an old idea, something Nixon, Dick Cheney, and Donald Rumsfeld pioneered as a response to the Great Society. We decided there were some good ideas there. As I talked to folks about this issue I asked them to look at how much we spend to address the impacts of poverty… We’re going to experiment with that, whether these kinds of payments, in lieu of other assistance, are a more impactful way to address poverty. We want to come out of the pandemic in a stronger place than we were before, we need to go out of our comfort zone to do that.”

Catchings said she was concerned that non-Alexandrians could benefit from the program.

There were a few issues where both candidates agreed: on the need to restore school resource officers to the schools, a need to continue regulating electronic scooter usage, and the need for Dominion Energy to invest more heavily in Alexandria’s infrastructure to prevent the kinds of frequent power outages the city has experienced recently.

Early voting is already underway for the general election, which is on Tuesday, Nov. 2.