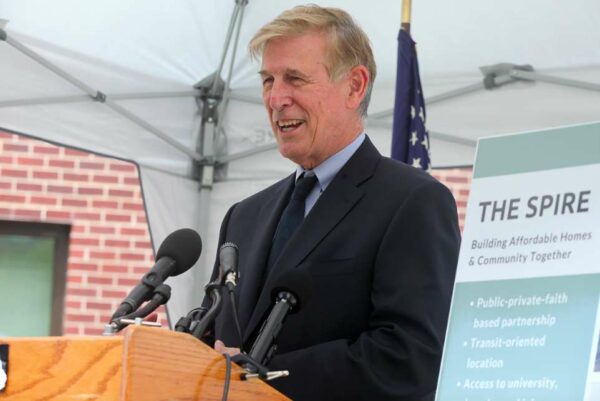 Some voters in the 8th District will get an in-person visit from their Congressman in the coming days.

“I’ll be doing lots of door-knocking in the coming weeks,” he said. “Youngkin, who I’ve never met, has promised to roll back things like universal background checks (to buy guns). I think we’re all terrified that Virginia could go the way of Texas and outlaw abortions six weeks after your last period. Virginia has come a long way and we do not want to move in the wrong direction.”

Youngkin has reportedly said that he supports banning abortions at 20 weeks of pregnancy, and that he would have voted against the Texas plan.

Over the past year, Beyer has also thrown his weight behind labor unions, voting in Congress in favor of granting them more bargaining rights. He also said that calls to defund the police are ‘One of the dumbest things I’ve ever heard,’ but did not comment on the recent City Council actions to defund and then reinstate the Alexandria City Public Schools’ school resource officer program.

With no plans to retire, the three-term Congressman says he’s more effective than ever, and that tensions in Washington have loosened considerably since Joe Biden was sworn in as president in January.

“I feel as effective as I have ever been,” Beyer said. “I don’t see anyone who could accomplish what I can accomplish right now. That won’t always be true.”

Beyer, 71, is running for reelection next year, and has a June 2022 primary opponent, Arlingtonian Victoria Virasingh.

“I do my my very best to stay as strong and fit as young as possible,” Beyer said. “I have no trouble working 60-to-70 hours a week, and I want to continue to do that. Obviously there’s an end to everything. I just don’t think it’s time.”

Beyer is also introducing a bill to require proof of vaccination on trains and planes.

“Businesses and agencies are demanding universal vaccination, because it’s not just about your personal health or personal freedom,” he said. “It’s because if you are sick you can go on and get other people sick. Vaccine resistance is prolonging this pandemic.”

He continued, “My bill, which says if you’re going to travel on a train or a plane or work in a train station or airport, you need to either be vaccinated or show proof that you haven’t had the disease for the last 72 hours.”

While Congress will be challenged to pass the Biden administration’s infrastructure and social spending bill and the “Build Back Better” plan, Beyer says he’s hopeful.

“With Biden as president, things are much calmer,” he said. “There are virtually no outrageous things coming up. There are difficult decisions that are made — to leave Afghanistan, for example. And there are difficult challenges ahead.”

“I feel very hopeful,” Beyer continued. “While there are partisan divisions, and while I don’t understand a lot of the Republican objections, for example raising the debt ceiling, it’s (Congress) still a fairly friendly place.”