Senior living facility The Landing (2620 Main Line Blvd.) in Potomac Yard is scheduled to open sometime within the next month or two, and with it comes a handful of the rare affordable assisted living units.

Last week, the city announced that seven affordable one-bedroom assisted living units will be available in The Landing.

“An Auxiliary Grant provides financial assistance to help cover the cost of room, board, and assistance with activities of daily living for low-income aged, blind, and/or disabled individuals,” the city’s press release said.

Staff at The Landing said the project is planned to open sometime in February or March and is currently taking reservations.

The Landing will be a mix of independent and assisted living units in the heart of the planned redevelopment of the Potomac Yard neighborhood. The development will include a spa, salon and fitness center.

(Updated 1/12) The Institute for Defense Analysis (IDA) is officially opening its new Potomac Yard headquarters (730 East Glebe Road) later this month, marking one of the first new office arrivals brought by the promise of the nearby Metro station.

The IDA opening would have been around the same timeframe as the Potomac Yard Metro station’s originally scheduled opening just a block or two away, but that’s been pushed back to sometime this fall. The ribbon-cutting is scheduled for 11 a.m. on Tuesday, Jan. 25.

“IDA is excited to be part of Alexandria’s high-tech corridor in Potomac Yard,” a press release from the company said. We moved our headquarters and Systems and Analyses Center from the City’s Mark Center area to a newly-constructed, state-of-the-art facility into the vibrant Potomac Yard community that has the technology, space and amenities that will better serve the needs of our staff and sponsors.”

The new headquarters contains an auditorium that seats 300, breakout conference rooms and other meeting facilities.

“The move to Potomac Yard was a major investment in the future of IDA,” said IDA President Norty Schwartz in the press release. “The new facility provides modern infrastructure, including Metrorail accessibility, substantially more classified workspace and meeting space, and places us in an  accelerating Northern Virginia innovation ecosystem with Virginia Tech and Amazon, among  others.”

(Updated 1/12/22) Slowly — maybe too slowly — the Potomac Yard Metro station is coming together. An update at a meeting last Tuesday showcased the latest in the station’s construction and offered a look at what’s ahead in the spring.

One of the biggest updates is that the rail in the middle of the station is nearly complete. 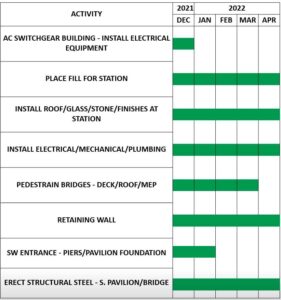 “Our track subcontractor aligning and placing rail to correct location,” said project manager Jeff Wood. “Once that work is completed, we will come back through and start pouring the concrete plinths underneath it. At that point, the rail will be done in the middle of the station. Our electrical subcontractor will have work to do on tightening signals, but the track itself will be complete.”

Wood said the next steps are pouring concrete plinths underneath the rails and having an electrician tighten signals, but once that’s done the track itself will be complete.

Now, the construction workers are putting together the escalator, roof, and pedestrian bridges.

A schedule shared at the meeting indicates that the AC Switchgear building and the foundation work for the southwest entrance are scheduled to be finished this month and in January. Other infrastructure work is scheduled to continue through the spring.

“Each month, you’ll see more and more external work occur,” Wood said, “and the station will become more like what people envisioned on day one.”

The next meeting of the group is scheduled for Monday, Jan. 24.

A Maryland man was arrested earlier this month for allegedly shoplifting $350 worth of merchandise from the Target at Potomac Yard.

The incident occurred on Wednesday, Nov. 24. The Target loss prevention manager told police that two suspects walked into the store, and that he recognized one of them as a frequent shopper, according to a search warrant affidavit.

Using store cameras, the prevention manager followed the suspects, who both had carts, and observed them place items within two storage containers that were in the baskets.

“At one point, (a suspect) places a blazer he had been wearing into the shopping cart to conceal additional items,” police said in the search warrant.

The stolen items were listed as:

The suspects were then seen by employees leaving the area in a Maryland car. A check of the license plate and credit card used found that both belonged to one of the suspect’s girlfriends. The suspect who allegedly drove his girlfriend’s car and used her credit card was charged with petit larceny earlier this month and goes to court on Jan. 14. The other suspect wore a face mask and has not been identified.

A 26-year-old Maryland woman faces serious charges after allegedly fleeing from a police investigation of a shoplifting offense at the Target store in the Potomac Yard shopping center.

“During the course of investigating this incident, one of the suspects resisted arrest and jumped into a vehicle,” police reported in a search warrant affidavit.

Sharifa Shuler was arrested on September 27 in Bowie, Maryland, after allegedly eluding police in a silver BMW on September 18.

“Shuler drove the vehicle into (the investigating officer’s) police cruiser striking the passenger side rear tire,” police said in the warrant.

Shuler allegedly almost struck the officer and a pedestrian in a crosswalk, according to the warrant. Police said that Shuler then allegedly drove on the sidewalk on S. Henry Street.

Several minutes later (police) located the suspect vehicle traveling south along S. Henry Street and observed it traveling on the sidewalk,” police said in the affidavit. “The pursuit was terminated and the vehicle was last seen traveling into Maryland.”

Shuler was booked in the Alexandria Jail on October 21 and released on a $3,000 bond the same day, according to the Alexandria Sheriff’s Office. She was charged with petit larceny (less than $1,000) not from a person, assault on law enforcement, resisting arrest, failure to stop at an accident and reckless driving. She goes to court on December 10.

The event is scheduled to run from noon to 2 p.m. and will give local prospective adopters a chance to meet some local dogs looking for homes.

Interested pet owners can get started by filling out adoption forms online in advance. There are also resources on the website for those looking for help training their new pets or finding pet-care options locally.

A list of featured dogs and other pets currently looking for adoption are also on the Lucky Dog website.

It wasn’t so much a groundbreaking as it was a wall-breaking, as local dignitaries smashed their way to a new future at the new Inova Oakville at Potomac Yard on Monday (Nov. 15).

After years of development, construction officially began on the $300 million project at the corner of Swann Avenue and Richmond Highway — just down from National Landing and the Virginia Tech’s Innovation Campus. The project and includes more than 1 million square feet of residential space dedicated to apartments, a new 93,000-square-foot Inova HealthPlex with a comprehensive emergency room and 55,000 square feet of retail. The facility is planned to open in fall 2023.

“This is an exciting day for our city,” Mayor Justin Wilson said at the event. “Congratulations to everyone who made this happen. We look forward to continuing to partner with Inova long into the future to expand world-class health care services in our community.”

“The new facility represents one more way that we show our commitment to all people in our communities,” said Inova Hospital System President and CEO J. Stephen Jones. “It offers a gateway for communities that we have not traditionally served to the level that we know that we can.”

Douglas M. Firstenberg, principal at Stonebridge, which is developing the property, said that the mixed uses at the property will set it apart.

“This is really a vision of the future, the way we’re integrating the HealthPlex and the services for the daily needs and lives of the community are truly different,” Firstenberg said.

Visit Alexandria has announced the return of the Alexandria Holiday Boat Parade of Lights early next month.

The event is scheduled for 5:30 p.m. on Saturday, Dec. 4. The event is planned to feature dozens of brightly lit boats cruising along one mile of the Potomac River shoreline, Visit Alexandria said in a press release.

The event was one of those cancelled last year due to the COVID-19 pandemic.

The boat parade is part of the weekend of festivities, including the city’s famous Scottish Christmas Walk and Parade. A similar boat parade is planned the same evening at 7 p.m. in D.C.

The daytime activities will include a visit from Santa and Mrs. Claus on a fireboat at 3:30 p.m.

Parade onlookers are encouraged to spread out for the viewing, with a list of suggested spots included in the press release: 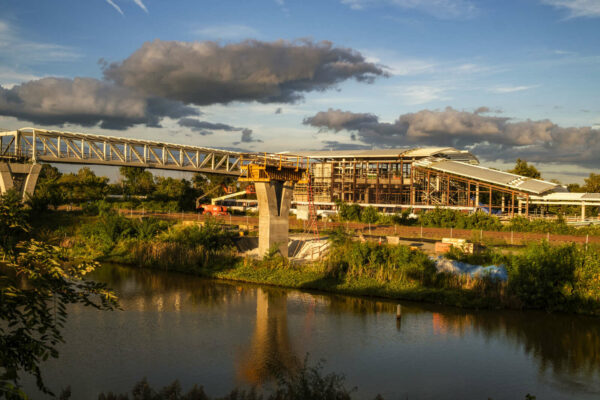 Metro’s Yellow Line, which runs through Arlington and Alexandria, could see some closures next year as the Washington Metropolitan Area Transit Authority (WMATA) works to repair the Yellow Line Bridge between Virginia and D.C. and bring the Potomac Yard Metro station online.

Yellow Line Bridge and tunnel rehabilitation project will include repairs to the bridge and fix water-caused erosion in the tunnels.

The bridge was built in the 1970s and WMATA’s project website said it’s now showing “excessive wear and corrosion” while the tunnel has been subject to “decades of water infiltration and underground moisture [which] have eroded the steel-lined tunnels.” WMATA warned that long-term repairs are necessary to avoid structural failure.

The project will also upgrade the fire suppression system on the bridge, which is currently past its useful life according to WMATa, and remediation work in the tunnel to repair cracks.

The exact timeline for the project is still unclear. Andrew Off, Vice President of Project Implementation and Construction, said a shutdown is expected sometime in fall 2022.  The shutdown would close the bridge between the Pentagon and L’Enfant stations.

“We expect to start sometime at the end of the next calendar year,” Off said. “We’re still working through with our general contractor on the specific construction duration for the Yellow Line Bridge closure.”

Meanwhile, further south on the Yellow Line, Off said a two-week closure is likely as WMATA connects the new Potomac Yard Metro station to the network.

“We’ll have a scheduled two-week or 16-day shutdown in late summer or early fall in support of connecting the new Potomac Yard infill station to our existing system,” Off said.

The station had been scheduled to open next spring but was pushed back to September 2022 after an error was found in the project’s design. Alexandria leaders are still hopeful the project could be moved up to earlier in the year.

(Updated 1 p.m.) The Alexandria Fire Department evacuated homes near a construction site after an apparent gas leak at the 400 block of Calvert Avenue.

AFD Senior Public Information Officer Raytevia Evans said that had been closed Richmond Highway to northbound traffic at E. Glebe, but has since reopened. Calvert Avenue is closed, though the gas leak has been fixed.

Evans said two addresses with approximately 25-40 people were evacuated near the gas leak.

FINAL UPDATE (12:05pm): Calvert Avenue has reopened. The gas line has been fixed.

Members currently operating at a 6" outside gas leak at a construction worksite located in the 400 block of Calvert Ave. Richmond Highway is closed at E. Glebe going North. Evacuating 2 addresses approximately 25-40 people. Washington Gas is on their way to the scene.

🚨ALERT: The 400 block of Calvert Ave. is closed for a gas leak. Washington Gas is on scene. AFD is also on scene. Please avoid the area.@AlexandriaVAFD pic.twitter.com/Lm7oyArgOs