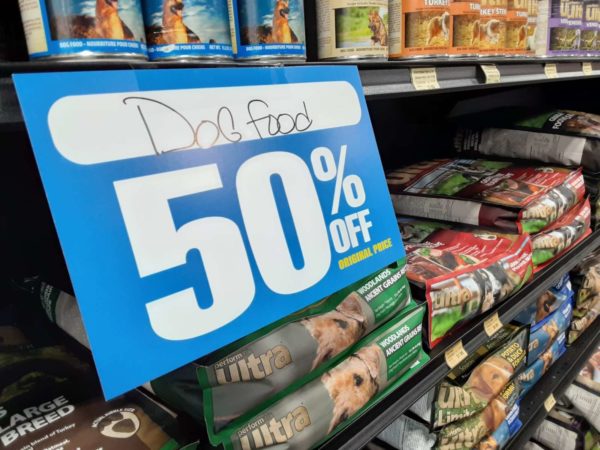 Three years after opening on Mount Vernon Avenue in Arlandria, Pet Valu will close its doors by Dec. 29.

The Canada-based pet store chain announced last month that it was shuttering its 358 locations in the U.S. due to the impact of COVID-19.

Staffers at the Arlandria location told ALXnow that they are waiting for updates from management on when exactly the store will close, and some are even expecting Christmas Eve (Thursday, Dec. 24) to be their last day in business.

“(A)ll stores will be closed by December 29,” Pet Valu replied to a customer on Facebook. “(P)lease call ahead to your local store for more information and for store hours.”

The store is offering sales of 50% to 70% off remaining merchandise. Even the fixtures are for sale.

“The Pet Valu U.S. team is proud to have met the needs of our devoted pet lover customers in the U.S. for more than 25 years,” Jamie Gould, Pet Valu, Inc.’s newly appointed Chief Restructuring Officer, said in a press release. “However, the Company’s stores have been significantly impacted by the protracted COVID-19-related restrictions. After a thorough review of all available alternatives, we made the difficult but necessary decision to commence this orderly wind down.”

There’s been another indecent exposure in Del Ray, this time in an alleyway in the unit block of East Bellefonte Avenue.

The incident occurred at around 6:30 a.m. on Friday, November 20. There was also another incident in the 2200 block of Mount Vernon Avenue at around 6 a.m. on Friday, Nov. 13, according to Del Ray activist Gayle Reuter. The police did not file a report for the Nov. 13 incident, Reuter said, as the officer told the victim who witnessed the exposure to call him if she saw the suspect again.

“We would love for the police to find out who this is and continue to keep the community apprised of what’s happening,” Reuter told ALXnow. “It’s surprising that when there’s this many people out on the street that he would have that much nerve to do this.”

There were also two reports during August of a suspect with a similar description performing lewd behavior in an alleyway in the 2200 block of Mount Vernon Avenue. The incidents occurred at around 10 p.m. on August 13 and August 25. The incidents are occurring in alleyways near busy areas near businesses and homes.

Alexandria Police Sgt. Mike Nugent recently told the Del Ray Business Association that cases like this often involve the homeless, and that the department is seeing homelessness rising in the nearby neighborhood of Arlandria.

“Call the police right away, and try to recall as much detail as possible. A lot of these cases in the city are connected to homeless,” Nugent said. “If you see something, get away from the danger if there is danger.”

Alexandria Police are investigating the shooting of two people in separate incidents over the weekend in Alexandria.

A juvenile was shot in the leg on Friday night, October 23, in the 1800 block of Diagonal Road in Old Town, according to police. The teenage victim was taken to the hospital by his mother, and police found shell casings at the scene.

The suspects in the case are not known, and police incorrectly tweeted that no one was injured.

The second incident occurred a few hours later on Saturday morning, October 24, in Arlandria. After midnight, a security guard got into a fight with a patron at Lilian’s Restaurant at 3901 Mount Vernon Avenue. The patron was shot in the upper body and was taken to the hospital in serious condition, according to police.

The security guard was not charged and the incident is under investigation.

NOTIFICATION :: The Alexandria Police Department is investigating a “shots fired” call for service in the 1800 block of Diagonal Road. There are no injuries. Expect police activity in the area.

NOTIFICATION :: The Alexandria Police Department is investigating a felonious assault call for service in the 3900 block of Mount Vernon Avenue. Victim transported to hospital. There is no threat to public safety. Expect police activity in the area. 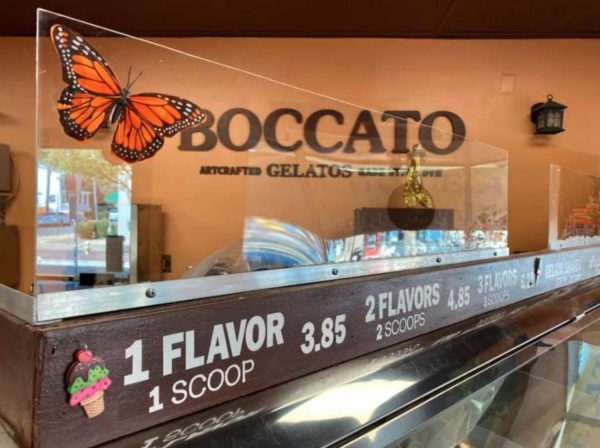 Cristian Velasco has been ready to open Del Ray Boccato since August, and hopes to start business by the end of the month.

There’s only one final hurdle — getting his business license approved.

Velasco, a native of Peru, received his degree from Le Cordon Bleu Ottawa and worked s a chef throughout the D.C. area before taking a trip to Venice, Italy. That’s where he says he fell in love with gelato.

“Venice was a romantic chapter of my life where I moved on from the kitchen to the beautiful frozen dessert,” Velasco said. “The ingredients are so important. I use organic ingredients and I’ve created some really great tropical flavors from the Caribbean and Latin America.”

He continued, “And I’m conscious of dietary restrictions. Like the dark chocolate gelato. It’s milk-free. It’s basically a sorbet, but it’s so intense with such a great body that it feels like it’s made with milk.”

After 10 years in business, Velasco closed Boccato Gelato in Clarendon in 2018. He also owned a location in Old Town for a year-and-a-half at 1012 King Street, which is now occupied by Killer E.S.P.

A dog suffered minor injuries after being hit by a car that then crashed into a parked car at the 7-Eleven at 3412 Mount Vernon Avenue in Del Ray on Wednesday night, October 14.

The dog had a cut above her right eye and swelling on her back and side. The dog and her owner were out walking when the accident occurred.

The accident occurred at around 11 p.m. The driver of an older model Honda Accord was parked facing the intersection of Mount Vernon Avenue and Glebe Road, and then popped the parking barrier, drove into Mount Vernon Avenue, circled around and then hit a parked car at full speed. Airbags in both cars were deployed.

The driver of the car was not injured and told ALXnow that his breaks malfunctioned. He told police through a translator that he’d only owned the car a short amount of time. 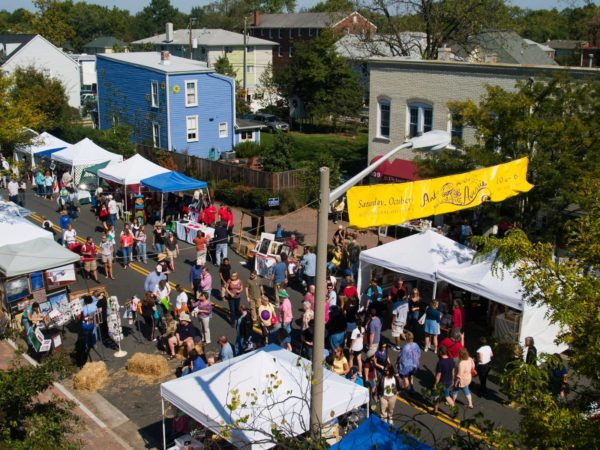 Del Ray’s Art on the Avenue festival usually draws hundreds of artists and upward of 75,000 visitors along Mount Vernon Avenue, but this year the celebration will be virtual.

“This is out 25th year, and it’s even more heartbreaking we can’t do it in-person,” festival founder Pat Miller told ALXnow.

More than 150 artists are still participating, and their work will be available by category from October 3 through the December holidays on the Art on the Avenue website.

“Through our site, you can buy from artists and see their work, almost just like you would with Art on the Avenue,” Miller said.

Photo via Art on the Avenue/Facebook

0 Comments
News
Alexandria Police are investigating reports of a man performing lewd behavior in an alleyway in the 2200 block of Mount Vernon Avenue in Del Ray. (Map via Google Maps)
Previous Image 1/2 Next Image

Alexandria Police are investigating reports of a man performing lewd behavior in an alleyway in the 2200 block of Mount Vernon Avenue in Del Ray.

Police said the suspect is a bald man in his 30s.

Police also said this is not the same person as the man who was arrested in for public indecency near the Alexandria Commons Shopping Center on August 22.

0 Comments
News
The driver of an SUV suffered life threatening injuries in a crash in Del Ray on September 4, 2020. (Map via Google Maps)
Previous Image 1/2 Next Image

(Updated at 4 p.m. on September 11) The driver experienced a medical emergency and was sent home the following morning after the crash without any injuries, according to police.

The driver of a red Toyota SUV suffered life threatening injuries in after crashing into parked cars on Mount Vernon Avenue between E. Windsor and E. Howell Avenues in Del Ray.

No one else was injured in the accident, which flipped over the red Toyota. The driver, who has not been identified, was transported to the hospital, according to Alexandria Police spokesman Lt. Courtney Ballantine.

The Crash Reconstruction Team is investigating the crash and will release information on the cause within 48 hours, Ballantine said.

The accident occurred across the street from Evening Star Cafe and a number of other local businesses. 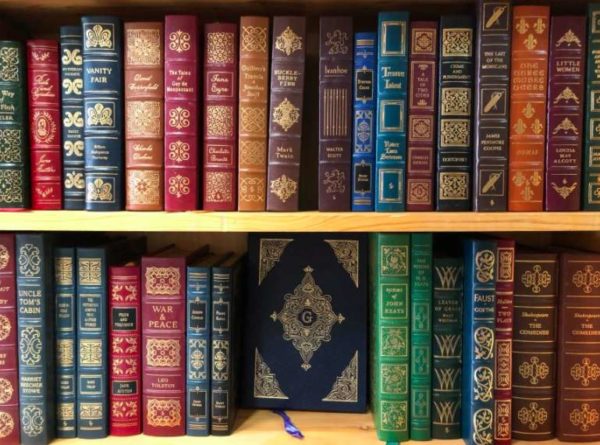 When one door closes another opens, and that’s definitely the case with The Company of Books, Del Ray’s new used book store is turning the page and replacing the Book Bank in Old Town. The new store opened at 1712 Mount Vernon Avenue in Del Ray a little less than two weeks ago.

The Del Ray location is still a little empty, and books and shelves are being brought in daily. Readers might find a few noticeable differences between the new and the old book stores. For one thing, the Company of Books is a nonprofit and its founder and Executive Director Rachel Baker wants to use future profits toward community events.

“We definitely are not looking at expanding into more locations, and our goal is to give back to the community in a way that can be helpful, and mean something,” Baker told ALXnow.

The Book Bank, which is an Alexandria staple that has sold used books for decades at 1015 King Street, will be closing its doors for good on September 20. The store will be offering sales of up to 50% off before the closure, and even before discounts the average cost for a book is $6.

There was some controversy with the new store, as a neighbor in Del Ray reported that one of its board members was taking books from little free libraries to sell in the store. Baker said that the books were recycled back into the little free libraries and that she has thousands of books for sale.

“The profit margin on a secondhand bookstore is incredibly small, and it definitely requires volume and you cannot make any kind of income taking books from little free libraries and reselling them,” she said.

Photo via The Company of Books/Facebook

Alexandria Police are investigating smash-and-grab incidents at three ABC stores that occurred at night on August 25 and 26.

The following stores were broken into after hours.

Ballantine said that there are multiple suspects and no descriptions are available.

As previously reported, there has been a 12% increase in the number of larcenies in the city this year. A surge in violent incidents in Old Town has also prompted APD to increase their presence on the street.