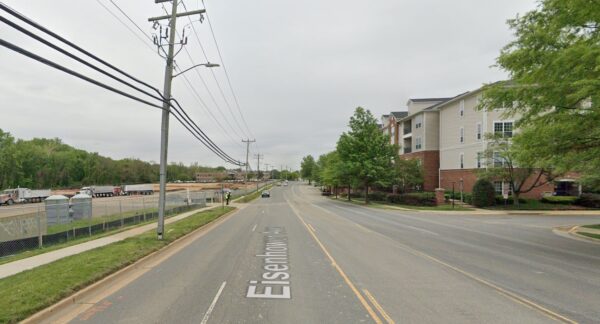 The City of Alexandria is looking at adding protected bike lanes (page 21) to Eisenhower Avenue and South Pickett Street in the Van Dorn neighborhood.

A report to the Transportation Commission last week reviewed some of the plans for adding protected bike lanes around the city. The plan, as recommended in the Complete Streets Five-Year Plan reviewed in June, includes adding these new bike lanes sometime in the next five years.

Protected bike lanes are facilities that are fully separated from vehicular traffic with a physical divider, like a curb, bollards or planters.

The protected bike lanes would run on:

While that stretch of Eisenhower has traditionally been industrial areas and small clusters of local businesses, the area is gradually urbanizing with large swaths of new residential development planned.

According to a report filed at the Transportation Commission:

Staff have taken steps aimed to streamline decision-making regarding bicycle lane design and implementation. The adoption of the Curbside Prioritization Framework in the Alexandria Mobility Plan (AMP) helps staff identify where bike lanes would be a high priority. As part of this framework, bike lanes, among other items included in City plans, were identified as the highest priority use in all land use contexts.

The report said protected bike lanes are an important strategy for meeting the needs of riders of all ages and abilities.

Bike lanes have not always been fondly received in Alexandria: bike lanes were paired with a road diet on Seminary Road that stirred up some local controversy in 2019.