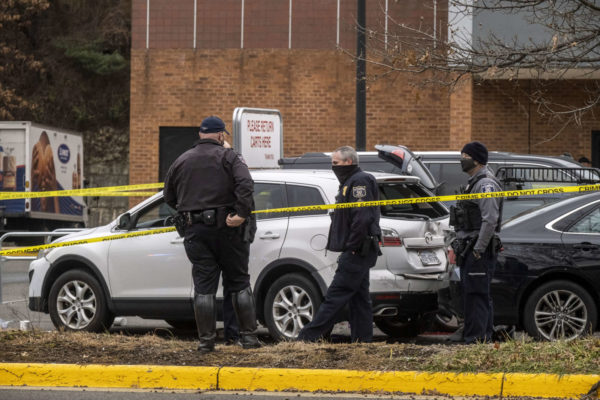 A 52-year-old Alexandria man has been charged with driving while intoxicated in a crash on Jan. 5 that put a 59-year-old man in critical condition.

“The victim was transported to an area hospital, where he lost both legs as a result of the crash,” Alexandria Police reported. “He remains in critical but stable condition.”

Catalin Filipeanu was charged with maiming of another resulting from driving while intoxicated for allegedly pinning the victim against another car. It occurred in the parking lot of the Safeway at 299 S. Van Dorn Street in the Van Dorn Plaza shopping center

Filipeanu stayed at the scene until police arrived. The incident remains under investigation by the Alexandria Police Department Crash Reconstruction Team. Anyone who witnessed the crash is asked to contact investigator Jordan Young at 571-414-8975.

The last reported pedestrian fatality was in November in Old Town, and was preceded October when a 43-year-old man was killed after being struck by a vehicle in the 2500 block of N. Van Dorn Street. In February 2020, there were also incidents in the West End on Duke Street, near the King Street-Old Town Metro station and a fatality at the intersection of Duke Street and Cameron Station Blvd.

There were also two incidents in 2020 of pedestrians in Alexandria who lost limbs after being struck by cars.

Two Fairfax County men were arrested last month and charged with drunkenness, resisting arrest and assault and battery after a fight at a West End bar.

On Dec. 11, police arrived at the Hashtag Restaurant & Lounge at 654 South Pickett Street and found the 23-year-old and 22-year-old men with swollen knuckles and welts on their faces. Both men were highly intoxicated and told police that they were assaulted while they fought by bar security staff and a bartender.

“The assaults occurred both inside and outside the establishment,” police said in a search warrant affidavit.

Police also said finding the security footage of the incident has been a challenge.

According to the affidavit, “Because the business owner has either refused to cooperate with the Police further in this investigation or is unable to provide the video evidence sought to identify perpetrators of the crime and provide an impartial view of the events, [the investigating officer] is compelled to locate this information in this fashion to prepare an addition(al) warrant for the video evidence, which will be delivered to the security company managing the camera system.”

The establishment is in the Pickett Square shopping center, which is in an industrial area near the Landmark area and S. Van Dorn Street.

As the city prepares to head into 2021, staff and Transportation Commissioners have been putting together a New Year’s resolution of top transit priorities for the next two fiscal years.

In a report prepared for tomorrow’s Transportation Commission meeting, 20 planned transit projects were ranked by their priority to staff and commission members.

The top scoring item was the Landmark Transit Hub, a planned nexus of bus rapid transit, Dash and Metro bus traffic in the West End.

“[The goal is to] provide an urban transit hub within the neighborhood… to serve as a stop and transfer point for bus rapid transit, DASH, and Metro Bus service,” staff said in a description of the project. “Bus stops will be provided as on-street parallel spaces.”

The new transit hub was listed as costing over $5 million with a ten-year timeframe to start construction. A presentation from staff in 2018 said that Landmark Mall is the most-used non-Metro station transit location in Alexandria and is a critical transfer hub for various bus lines.

Part of the new hub would be a series of bus terminals to allow smooth transfer between bus routes, as well as access to the planned transitway in the area.

The next highest ranked priority was the expansion of bike trails in Alexandria based on earlier-identified needs.

“Bike and multi-use trail projects were prioritized for the 2016 update to the Ped/Bike Chapter of the Master Plan,” staff said. “This project compiles at least 7 of the 10 prioritized projects that call for the construction of 4.8 miles of new trails.”

Alexandria Police are investigating a series of smash-and-grab burglaries at seven businesses in the West End and along Eisenhower Avenue.

Assistant Police Chief Don Hayes did not say what was stolen would not comment as to whether the city is experiencing a crime spree.

The incidents occurred on the following dates and at these locations:

Although the multiple crime events were similar in nature and occurred on two separate days, Hayes would not comment as to whether the incidents are linked and said he would not discuss the facts of an ongoing investigation.

In April, a man was arrested for a crime spree after four gas stations in Del Ray and Old Town were broken into in a similar fashion and more than $45,000 worth of items was taken.

Alexandria Police are investigating a robbery from a person in the city’s West End early on Thursday night.

At around 6:30 p.m., a person was struck by a chair inside a business in the 200 block of S. Van Dorn Street and robbed of personal items. The victim received minor injuries.

Police spokesman Lt. Courtney Ballantine said that there were multiple suspects and no one has yet been arrested. No suspect descriptions are currently available and the name of the store in which the incident occurred has not been released.

NOTIFICATION :: The Alexandria Police Department is investigating a robbery from person in the 200 block of Van Dorn Street. Personal items taken and victim received minor injuries. Expect police activity in the area. 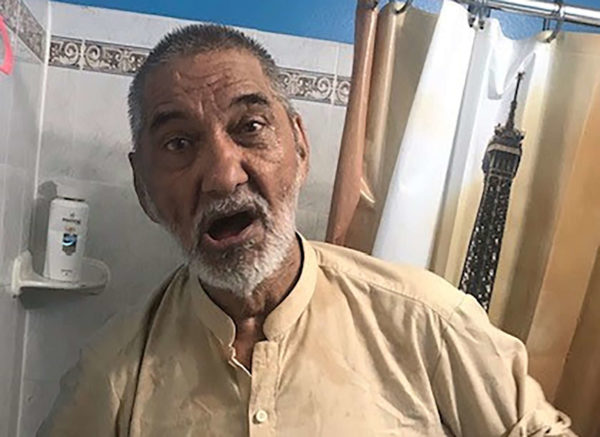 (Updated at 5:45 p.m.) The city reported in an email that the missing man has been found safe and unharmed and has returned home.

A search for a 65-year-old man missing since June 29 has stretched into Alexandria. The city says that Muhammad Khan may have been in the area of Van Dorn Street and Edsall Road in the city’s West End on June 30.

Khan was reportedly last seen on June 29 at 10 p.m. in the 6000 block of Leewood Drive in Fairfax County, which is about two-and-a-half miles from Van Dorn Street and Edsall Road. He also likes to frequent restaurants, according to a city news release.

“He is considered endangered due to mental and/or physical health concerns,” according to the release. “Mr. Khan is 6’0″, 190 pounds, with brown eyes and gray hair, last seen wearing a red checkered button-up shirt, orange pants and sandals.”

Anyone who sees Khan is asked to call or text 911.

A 42-year-old Alexandria man was arrested for a hit and run and driving under the influence after allegedly smashing his Land Rover into a telephone pole in the West End on Monday, March 9.

At around 11:30 p.m., an Alexandria Police officer was on mobile patrol when he reported finding vehicle debris and a snapped telephone pole in the area of Lincolnia Road and Quantrell Avenue.

The officer then heard “what sounded a lot like an explosion and saw what appeared to be a large flash of light from the area of Van Dorn/Duke Street intersection,” according to a police search warrant affidavit. “The pole was shattered at the base and laying parallel to the roadway, partially on the sidewalk. There was extensive vehicle debris to include a portion of the front fender.”

The officer reportedly got into his cruiser and was flagged down by staff from BMW of Alexandria, who reported that the power went out after a loud banging sound. The officer was then told over the radio that more debris was found at Stevenson Avenue and South Whiting Street.

A white Land Rover with front damage and flat passenger-side tires was soon located parked at the 7-Eleven at 331 S. Whiting Street.

Police arrested Christian Belandres at the 7-Eleven after he took a preliminary breath test police said registered a 0.192 reading, which is 2.4 times the legal limit. Belandres declined to perform a standard field sobriety test, according to police.

A witness also reportedly tried to pull Belandres out of the car at a Sunoco gas station at 190 S. Whiting Street.

“The witness attempted to pull Mr. Belandres from the vehicle to check on him, telling him that he was ‘not fit to drive,’ before Mr. Belandres and the Land Rover pulled away before coming to a stop at 331 S. Whiting,” noted the affidavit. 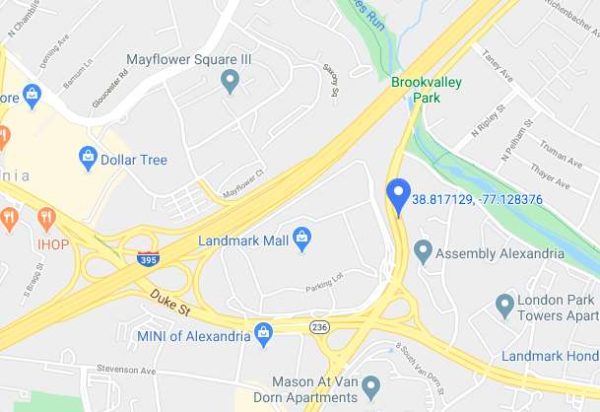 A crash has closed a section of Van Dorn Street near Landmark Mall, according to police.

The crash damaged a power pole and prompted the closure of Van Dorn Street between Duke Street and Holmes Run Parkway.

Police spokesman Lt. Courtney Ballantine said it was a single-car accident that resulted in minor injuries to the driver, who was taken to a local hospital. The power company is on the scene, Ballantine said, but that it would be several hours before the pole was repaired. Drivers should expect the road to be closed for the duration of those repairs.

Police said on Twitter that people should avoid the area.

NOTIFICATION: Van Dorn Street between Duke Street and Holmes Run Parkway is closed due to a vehicle crash. The crash resulted in minor injuries and a power pole being damaged. Please avoid the area and expect police on scene. 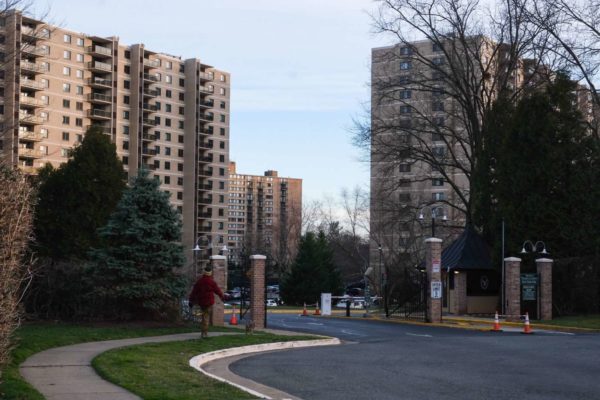 A new Nepalese restaurant and market is coming to the ground floor of a West End condominium complex.

Gorkha Nepal is a new location that will replace a previous restaurant and market in Watergate at Landmark, according to staff at the condo building. Like the old location, staff said the new Gorkha Nepal will give residents of the gated community a new place to eat and shop for some essential goods.

The former market had pretty standard fare, like breakfast sandwiches, burgers and pizza. The new location is applying for permits to serve beer and wine, but food options remain a mystery.

The space is currently undergoing renovations, but staff said it should be ready to open sometime next month. 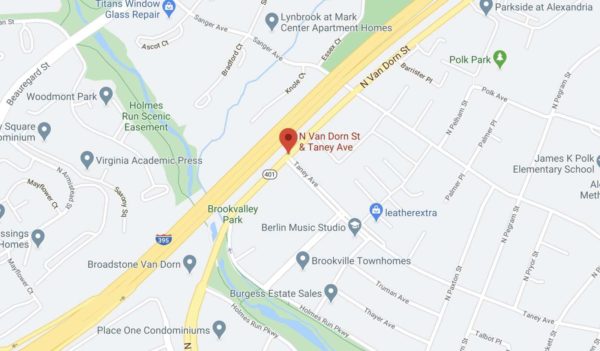 A 22-year-old man is in critical condition after being struck by a driver on North Van Dorn Street last night.

The crash happened near the intersection with Taney Avenue around 6:15 p.m. Police say the victim was rushed to the local hospital, while the driver remained on scene.

APD is investigating the crash and asking any witnesses to step forward. More from a press release:

The Alexandria Police Department is investigating a traffic crash that occurred on Wednesday, February 12, in the vicinity of North Van Dorn Street and Taney Avenue.

At approximately 6:15 p.m., police responded to the area for a pedestrian struck in the intersection of North Van Dorn Street and Taney Avenue. Initial investigation indicates Mr. Erick Berrios Revello, a 22-year-old Bolivian resident, was crossing North Van Dorn Street when he was struck by a motor vehicle. Mr. Berrios Revello is in critical condition from his injuries at a local hospital. The driver of the vehicle remained on the scene.