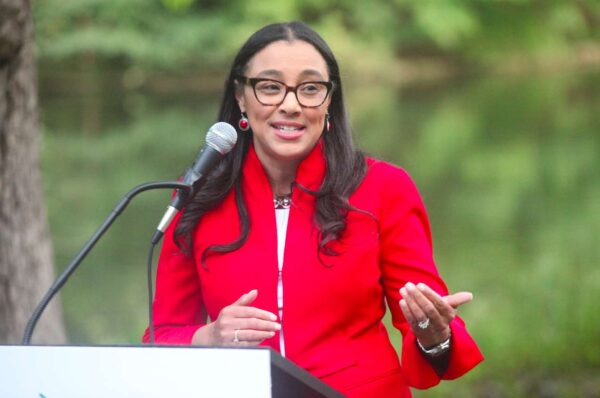 Melanie Kay-Wyatt says that she lives by one word — impact.

With just a month under her belt as interim superintendent of Alexandria City Public Schools, she’s got a mountain of responsibility to contend with, including managing the first days of the 2022-2023 school year, developing the school system’s upcoming budget, and forging relationships with city leaders.

Kay-Wyatt-s new office in ACPS Central Office is sparsely decorated. The walls are completely bare, and there are a few small framed photos of her family and her oath of office as interim superintendent. She says that her predecessor, Gregory Hutchings, Jr., gave her lots of advice before his last day at the end of August.

“He said to be passionate, continue to be who I am,” Kay-Wyatt said.

All this comes as the school system continues with a teacher and bus driver shortage, lagging standardized testing scores, and safety issues. A recent safety report shows that there were 46 students arrested and 68 injured last school year, and the school system is now using the 2021-2022 school year as a baseline for future improvement.

Kay-Wyatt said she approaches her workload with passion.

“Let me tell you what the work is like,” she said. “If you see it as a work of being something to control, it’s not a passion, right? And this is a passion for me. That’s what I do, that’s why I’m here — to have an impact. Please know that any educator that comes into any building every day, does not see it as controlling or doing something. It’s about having an impact in making a difference, and that is very different than going to a job where you’re just clocking in hours. The work that we do has impact. It changes lives. It changes families.”

Kay-Wyatt is also tasked with delivering the School Board her recommendation on the future relationship between ACPS and the Alexandria Police Department’s contentious school resource officer program. The SROs — police officers assigned to the city’s high school and middle school campuses — were defunded between August and October 2021, and were brought back by City Council after numerous violent incidents with weapons in schools.

“My position is to do what I need to do to keep our schools and campuses safe,” she said when asked her position on policing in schools. “I’m building a partnership and making connections since I’m the new superintendent, to make sure that I have connections with the city manager, with the police chief and then we will work collaboratively to keep our school safe.”

Kay-Wyatt was hired last summer as the ACPS chief of human resources. She will have the interim superintendent position for at least this school year or until a permanent superintendent is chosen in a national search. It’s still too early to say whether she will throw her hat in the ring for the permanent position, she said.

“That’s a personal decision I’ll make when the time is right to answer all of that,” Kay-Wyatt said.

A native of Landover, Maryland, Kay-Wyatt has a bachelor’s degree in business administration from Mary Washington College, a master’s degree in education from Old Dominion University, a master’s in educational leadership from University of Mary Washington and a doctorate in educational leadership from Virginia Commonwealth University. She previously worked in human resources in Spotsylvania Public Schools, and as a principal, assistant principal and special education teacher at Fredericksburg City Public Schools.

END_OF_DOCUMENT_TOKEN_TO_BE_REPLACED

More Stories
Developer opens up about next steps for Landmark Mall redevelopmentListing of the Day: 2050 Jamieson Ave #1004 (Alexandria)