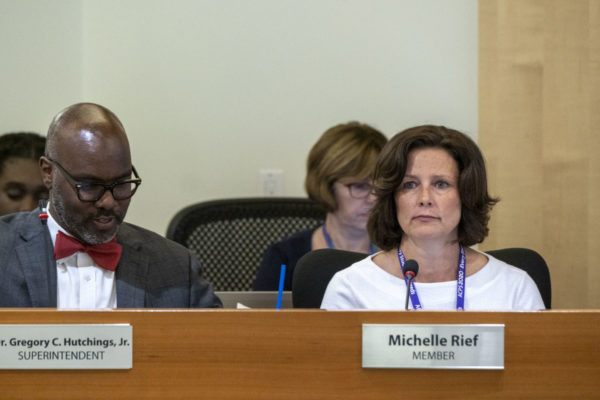 The last three years on the Alexandria School Board have been marked by a pandemic, social strife and a soured relationship with the City Council, but Michelle Rief is still proud of it.

“I’m running for School Board because I care deeply about our public schools,” Rief told ALXnow. “It would be an honor to serve in the leadership capacity on the School Board.”

After a term marked by the pandemic, Rief is one of only three incumbents seeking reelection on the nine-person body in November. She represents District A and faces incumbent member Jacinta Greene, former City Councilman Willie F. Bailey, Aloysius Boyle and D. Ohlandt.

“If I’m fortunate enough to serve another term, I’ll definitely prioritize relationship building with the new members of the School Board and City Council,” Rief said. “I think when you come on to the School Board, you quickly learn that it is a collaborative process. There’s a big learning curve, and there’s a lot of information to digest.”

She’s also interested in the vice chair position (determined in an internal election between Board members), and despite strong feelings and difficult memories from the past term, Rief gives ACPS high marks for its work during the pandemic.

“More than 60% of our students are on free and reduced lunches, and we immediately pivoted to provide all of our students with free meals,” Rief said. “Pivoting to teaching children virtually on a massive scale was a lot of work for our senior leadership team to figure out.”

Rief continued, “We sent the kids home with Chromebooks and our IT department secured home internet access for every student in our school division who needed it. There are many school divisions in Virginia and the United States where that is not the case, and our teachers spent countless hours transferring their curriculum materials online.”

Rief, who has three kids in the school system and has lived in the city for 15 years, said continuity of leadership is important. She was raised in Iowa, California and Florida in a military family, and got her bachelor’s degree from Florida State University and doctorate in African American Studies from Temple University. She is also a history and sociology professor, and taught at Borough of Manhattan Community College in New York and later at Northern Virginia Community College.

“What I remember in early March of 2020, is receiving lots of frantic emails from parents who wanted us to close the schools,” she said. “Just the uncertainty of what was happening, and when we made the decision to close on March 13, everyone thought it would be a short-term thing. It was a scary time.”

She’s taken some controversial positions, like voting against school resource officers, and despite the wishes of City Manager Marks Jinks feels that public housing should not be co-located on ACPS grounds. The Board was also criticized for taking too long to fully reopen schools — something that only recently occurred on August 24.

“Given the overcrowded nature of our schools right now, I think it’s important that we make sure that we use our school property to make sure we’re adequately meeting our own needs within the school division,” Rief said.

Rief said the unpredictability of the last few years has been challenging, and that she is most proud of the Board approving the ACPS Strategic Plan.

“It’s a lot,” she said. “Our community demands a lot from our elected officials, and we’re here to do the best we can to serve the community. It is a lot of work and a lot of responsibility.”

Rief said that the last day of school in June was emotional for her. She was picking up two of her kids from Mount Vernon Community School, and as the kids and teachers walked outside, their parents who waited for them spontaneously burst into applause.

“I think it was just a sense of relief that we made it through the school year, and also an appreciation for what the teachers did to get our kids through that year,” she said. “Because many of them have their own challenges with childcare, health considerations with family members, and they made a big sacrifice and there was just a lot of appreciation.”