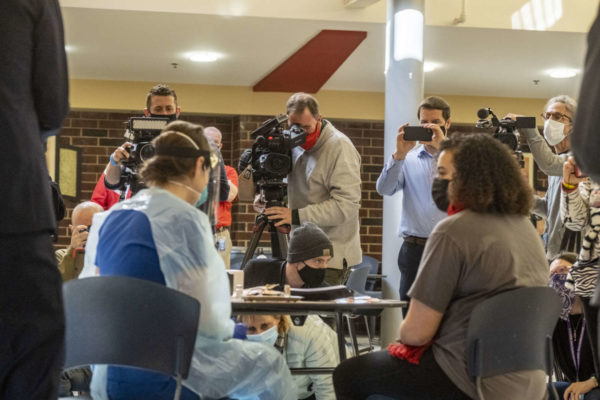 Some parents and teachers are facing uncertainty and lingering questions in the days and weeks before ACPS returns to in-person school on March 16.

While ACPS has regularly put out newsletters on the plan for reopening, some in the community are still unsure if their teachers will be back in the classrooms or whether teachers who have been unable to secure a vaccine amid a hectic rollout will be forced to return.

“It’s been absolutely wild at the school right now,” a teacher at one of Alexandria’s middle schools told ALXnow. “We were told early in the pandemic that no one is going to be forced back. There was a back to school survey and they told families it was non-binding. We were told that if you have a medical issue, no one is being forced back to school. They did a sharp turn a few weeks ago: that we’d be back in the buildings March 1.”

While teachers are currently able to get the vaccine on paper, city leadership acknowledged that the process has been slow-going as doses trickle into the city from the state. The teacher said some faculty have faced difficulty getting the vaccine, or have gotten the first dose but are expected to go back to work before they get the second dose.

An ACPS spokesperson said the city is trying to get teachers vaccines, but considers them voluntary.

“The vaccination is voluntary and not required for staff to work in schools,” ACPS said. “All ACPS staff who sign up for the vaccination are designated as priority 1B. The AHD continues to schedule as many staff as possible for vaccinations depending on vaccine logistics.”

The teacher told ALXnow that they are required to submit a doctor’s notes if they are concerned about health conditions putting them at risk if they return to work, but that several have had notes rejected. An ACPS spokesperson said the organization would not comment on the process for health conditions as a “personnel matter” but that staff are encouraged to reach out to an HR representative for assistance. The teacher said that many in school faculty have tried contacting HR, but their calls go unanswered.

“We’re told ‘that’s an HR question’ but they won’t pick up the phone,” a teacher said. “I make calls, but they won’t call back and won’t respond to requests for calls. It’s anonymous people at HR making decisions for who is going back. I want to believe they’re well intentioned, but everybody is pretty confused.”

Matt Fox, a parent in ACPS, said even weeks before going back that he doesn’t know what the classroom situation will be for his child.

Childcare, already in short supply in Alexandria before the pandemic, is especially scarce now with waitlists leaving parents waiting months. Some teachers with children are scrambling to figure out what to do with their own children as they return to in-person teaching.

“My coworkers who have children were given just weeks to figure this out,” a teacher said, noting that some are so desperate they are asking if they can bring their children into school with them. “The response has been absolutely callous.”

An ACPS spokesperson said that if staff are unable to secure childcare, they are encouraged to submit paperwork to HR requesting to continue teaching virtually.

The teacher said faculty are unclear on what the plan was if teachers contract COVID, with some worried that they would have to take personal leave or continue teaching while ill, but ACPS said that won’t be the case.

“We would encourage any staff member who has a confirmed case of COVID-19 to take sick leave so they can focus on their recovery,” an ACPS spokesperson said, “a substitute teacher would be arranged to cover their class just as with any absence due to illness. If a staff member is symptomatic of COVID-19, we would anticipate that they would not feel well enough to teach virtually.”

Fox said he believes the schools are banking on teachers being more comfortable returning to work after some of their peers do. While earlier surveys of faculty indicated that less than half of school faculty would be willing to return to in-person classes, Superintendent Gregory Hutchings said he was hopeful more teachers getting the vaccine would help turn that around.

“I think maybe ACPS is doing a lot of ‘Safety Theater’ to help encourage both minority students as well as teachers that things are safe,” Fox said. “I believe that the percentage of teachers willing to go back will increase over the first few weeks as they hear from their coworkers that they feel safe. And the number of students going back will rise. This is a gradual re-entry, everybody around here has a different level of risk that they are comfortable with, but it is time to start that gradual re-entry.”

Fox said in-person teaching is important for Kindergarten age students in particular, and staff that spoke with ALXnow agreed, but said the process could use a little more care for the teachers being brought back.

“Every teacher I talk to wants to be back in the school,” a teacher said. “Nobody is like, ‘Man, I want to be teaching virtually.’ Teachers want to be back, but if you look at conditions of the school, we were not given time for child care or time to get second dose. ACPS has had enough time to plan and figure some of these things out, but teachers are being thrown under the bus and being told to deal with it, especially with child care.”