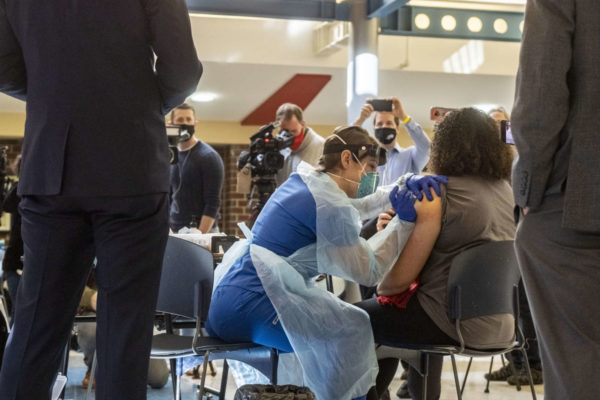 Alexandria Mayor Justin Wilson said in a recent virtual town hall that Alexandrians should prepare for the fact that it could be several months before the city moves out of phase 1B.

“The challenge right now is: we have no vaccine,” Wilson said. “We do not have vaccine supply to do anything near what we need to do.”

The city started vaccination with 1A in late 2020, which was reserved for vaccinating workers at Inova Alexandria Hospital. By February, everyone in 1A had been vaccinated and the city was pushing to move into 1B.

“In the beginning of February, when we reached the end of 1A, we were pushing Governor’s office to allow us to go into 1B,” Wilson said. “At that point, we had vaccine supply but no one to give it to. Then the governor allowed us and a couple other jurisdictions to go to 1B. We were actually the first to go to 1B.”

“At least initially, that included those 75 and older and frontline occupations like teachers and public safety that have been working throughout this crisis,” Wilson said. “The CDC changed the guidance on 1B and then the governor changed that guidance that added additional groups 1B. That added those between ages 65-74 and added those 16-64 but with a high risk health condition. Now, 1B as a whole comprises almost half the state. It is an enormous category.”

While Wilson said Alexandria has the capacity to quickly deliver vaccinations to the public, it lacks the supply from the state to do so.

“The city has plenty of capacity to administer vaccines,” Wilson said. “We’ve been planning this vaccination effort for months –staff from all over city government, partners in public agencies, private partners in pharmacies and physicians all ready to give out this vaccine and we have considerable capacity to do so. Once we have doses, can do tens of thousands of vaccines per week. Unfortunately we have no doses to do so.”

Wilson said some of the information from the Department of Health website can be misleading, saying that Alexandria has received 22,675 doses, but Wilson said that number is the entire amount that’s gone to Alexandria, much of which went to Inova.

“Our health department has received 13,000,” Wilson said. “Of those, 8,600 has been administered at our clinics and 4,100 have been given to physicians and pharmacy partners, whoa re administering them to patients.”

But there remains a large wait-list for 1B, not to mention all those in other professions signed on for 1C.

“We have over 30,000 residents on the wait list,” Wilson said. “We are going to receive a little less than 2,000 doses per week for the next month or so. That means this is going to take a while and everyone needs to brace themselves. Unless something dramatically changes with the supply of doses, it will be until end of the summer until we are able to get through 1B. It’s an important note because everyone is signed up, but it’s going to take a while before we have a dose for you.”