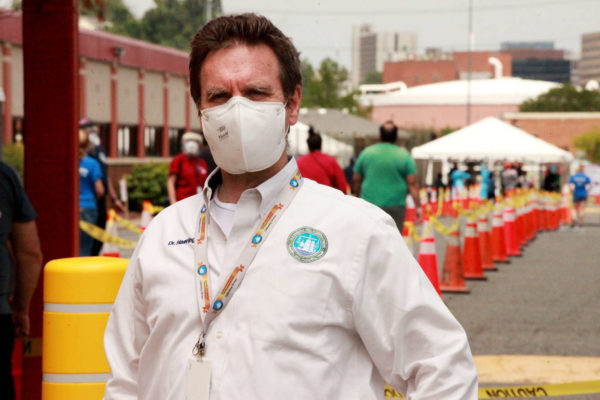 With a bit of luck, Alexandria Health Director Stephen Haering said the city could start to get its hands on a vaccine by December.

A limited supply of vaccine and a high public demand has led to national, state, and local plans on determining who gets the vaccine, when, and how. Haering outlined some of the plans for Alexandria at a City Council meeting last night.

Haering said other recipients of the first phase will be essential workers — like first responders and “workers that keep government working and society intact” — and adults at high risk — like those over 65-years old and those with underlying medical conditions.

“We’re looking at those first phases being available as early as sometime in December,” Haering said. “We don’t know exactly if that will come through Health Department or through pharmacies. Large pharmaceutical chains have an arrangement to vaccinate long term care facilities directly. State health will be involved with coordinating that. We’ve been coordinating and planning on helping with vaccination there in case that falls through.”

Haering said that accelerated testing and vaccine production has allowed for some quick turnaround distribution.

“To tell you the process here: what they are doing, and one of the reasons they’ve been able to fast track this vaccine, is to combined some of the phases they typically do sequentially they are doing simultaneously,” Haering said. “Phase 2 trials are typically done for safety, and phase 3 is for safety and effectiveness, and they’re able to combine those. During phase 3 they actually start producing the vaccine. Typically a company would not do that because of the financial risk; you want to make sure it’s effective before you start producing it.”

Haering said the 90% effectiveness shown in the Moderna and Pfizer vaccines is promising. If both vaccines come to Alexandria, Haering said it will be important for those who get one vaccine to continue their booster shots with the same program. The Health Department is looking into putting together colored cards or other memory tools to help locals remember which shot they started with.

The vaccine can’t come soon enough for Alexandria, where cases are on the rise again.

Haering said hospitalizations are on the rise as well. Fatalities have not increased substantially, but Haering said the concern is that those could follow the increase in cases after two to four weeks. Of particular concern is the increase of cases in long-term care facilities, where the majority of the city’s deaths have been.

Though a vaccine could be on the horizon, in the meantime, Haering reiterated earlier pleas to city residents not to travel or host large gatherings for the holidays.

END_OF_DOCUMENT_TOKEN_TO_BE_REPLACED

More Stories
Ask McEnearney: Should I List My Home During the Holidays?Reno’s Adoption Fees are Covered, says Animal Welfare League of Alexandria