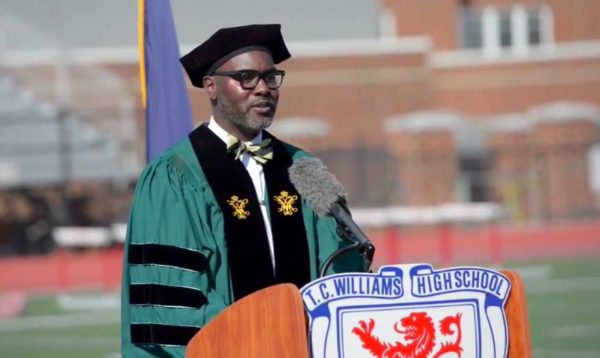 Heading into a School Board vote on Nov. 23, Superintendent Gregory Hutchings had thrown his support in with those supporting changing the names of T.C. Williams High School and Matthew Maury Elementary School.

Hutchings explained his support for the name change in an opinion piece in Tes, an educator trade magazine.

“Inexplicably, it has taken until today, 55 years since the school opened, to see a committed renaming process that may finally remove him and his legacy from the only public high school in Alexandria, a small but influential Virginia city in the shadow of Washington, D.C.” Hutchings wrote.

The announcement comes after a presentation on Monday by The Identity Project, an initiative formed by ACPS to examine the issue. The project gathered community feedback from students, faculty and alumni, which found that 75% of responders agreed with changing the name.

“On Nov. 23, 2020, the School Board will vote on whether or not to change the names of T.C. Williams High School and Matthew Maury Elementary School.,” ACPS said in a newsletter. “This comes after the start of The Identity Project, an extensive community discussion, which culminated in a presentation to the School Board (PDF) this past Monday, Nov. 16. In this presentation, Superintendent Dr. Hutchings presented his recommendation for the School Board to approve changing the names of both schools.”

In his essay, Hutchings references petitions that circulated around Alexandria earlier this year to get the name changed.

“In August, when I was informed that a petition with the requisite number of 100 signatures from anyone in the Alexandria community to begin the conversation had been submitted, I remember thinking this was our carpe diem moment,” Hutchings wrote. “Soon after, a second petition was submitted to change the name of one of our division’s elementary schools named after Matthew Maury, an oceanographer who also happened to be a Confederate who lobbied for the Confederacy in Europe, attempted to negotiate a slave trade with Brazil, and encouraged those with like-minded beliefs to migrate to Mexico following the civil war.”

“In the weeks and days that followed those submissions, there was frustration in our highly diverse school community — which comprises families from 120 countries speaking 121 languages — that things were not moving quickly enough,” Hutchings said. “But from where I stood, there was much work to be done to ensure a transparent, thorough and fair public engagement process.”

Hutchings didn’t include a recommendation for what the new name would be, a process likely to follow in early 2021 if the name change is approved.

“Later this month, the school board will vote on whether to change those two school names,” Hutchings said. “Among the suggestions circulating as alternatives are Boone-Yoast High School, named after coach Hermon Boone and assistant coach Bill Yoast from that famous ’71 football team, and Nolan Dawkins High School after the first African American judge in our city’s history. Other suggestions have included simply Alexandria High School.”

Both Boone-Yoast and Nolan Dawkins could generate their own controversies, with Boone’s role in the integration of T.C. Williams agreed to be somewhat exaggerated and Dawkins facing some public pushback earlier this year after it was revealed that the suspect in a murder had been out on bond approved by Dawkins.