Ibrahim Bouaichi, the Maryland man suspected of murdering Karla Elizabeth Dominguez Gonzalez in the West End last week, was released from jail on bond earlier this year while awaiting trial on charges that he attacked and raped her last fall, according to court records.

Gonzalez was shot and killed on July 29 at around 6 a.m. outside her home on S. Greenmount Drive in the West End. Soon after her death, Alexandria Police identified Bouaichi as a suspect and said that he was armed and dangerous.

It is the first homicide in Alexandria this year.

On August 5, the 33-year-old Bouaichi fled from police after being tracked down in Prince George’s County, Maryland. He crashed the car he was driving after a brief chase with Alexandria police officers attached to the FBI’s regional Violent Crimes Task Force, and was found to have shot himself, police said.

He is currently in the hospital with life-threatening injuries.

“Officers approaching the vehicle found Bouaichi with a self-inflicted gunshot wound,” Alexandria police said in a news release. “He was transported to a hospital, where he is currently receiving medical treatment.”

Bouaichi paid a $2,500 premium on a $25,000 bond on April 9 ($5,000 per charge for five charges) in exchange for agreeing to stand in court from May 4-6 for burglary, abduction, sodomy by force threat, strangulation and rape. According to court records, he said that he had a four-month-long relationship with Gonzalez.

Bouaichi attended his bond hearing virtually from jail, according to court records.

“The two individuals involved were boyfriend/girlfriend and there is a substantial defense here,” Bouaichi’s attorneys wrote in the bond motion. “Mr. Bouaichi can be released under any appropriate conditions to live with his mother and father at their home in Maryland. He has a solid record of employment, graduated high school, attended college and is not a flight risk. He has retained counsel and is absolutely devoted to working with his attorneys to establish his innocence.”

According to court records, Bouaichi had no previous criminal record, was employed as a car salesman and earned an estimated $4,000 to $12,000 in monthly commissions. An arrest warrant was served against him on October 10, 2019, and he was taken into custody 11 days later, according to court records. He was not given bond at the time.

Bouaichi was later indicted in January and a jury trial was set for March 30. The trial was postponed to May 4 due to the pandemic, which has also pushed back a significant number of cases in the Alexandria courthouse. On May 1, Dawkins pushed the case to August 17-19, according to court records.

“I can tell you that he was held without bond between his October arrest and April bond motion,” Alexandria Commonwealth’s Attorney Bryan Porter told ALXnow. “The bond motion was heard in open court and my office appeared and we strenuously objected to bond being set. Over our objection, the judge granted the motion and ordered that he be released to bail.”

Dawkins approved the bond on the condition that Bouaichi stay in his parents’ home in Greenbelt, Maryland, and only leave to meet with his lawyer or pretrial services, and have no contact with Gonzalez. Bouaichi’s attorneys also requested that an “inappropriate” photo he allegedly sent to her teenage daughter, who lives out of the country, be inadmissible in court.

“The Alexandria Adult Detention Center (‘ADC’) has imposed severe restrictions on visitation since the COVID-19 outbreak,” stated Bouaichi’s attorneys in the bond motion. “The only accommodations available to counsel and Mr. Bouaichi are video conferencing sessions which last no more than 30 minutes at a time and must be done by appointment and depends on availability.”

The motion continued, “Any suggested danger can be mitigated through appropriate conditions of release. Indeed, both Maryland and Virginia have state-mandated stay at home orders essentially requiring Bouaichi to remain in de facto home confinement.”

Calls to Bouaichi’s attorneys were not returned.

Gonzalez was from Venezuela and was known for competing in beauty pageants there, NBC 4 reported. A friend started a GoFundMe for a memorial service, which has so far raised $4,447. 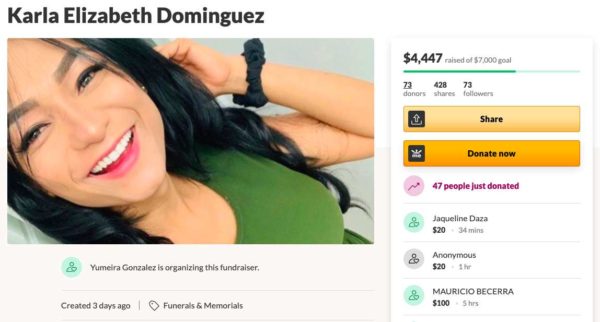 “We mourn the loss of Ms. Karla Elizabeth Dominguez Gonzalez,” Mayor Justin Wilson told ALXnow. “Her life was taken far too soon. We must learn from what happened here and determine how we prevent it in the future. In the meantime, I encourage our residents to keep her family in your thoughts during this time.”