Two Manassas men arrested in November for allegedly stealing air bags in Arlington are also suspected of committing 11 similar acts in Alexandria, according to police.

The 43-year-old and 25-year-old suspects were arrested on Nov. 13 in Arlington and charged in connection with three airbag thefts committed that day. The suspects are also accused of 11 similar incidents in Alexandria between Aug. 25 and Oct. 31, 2022, according to a recently released search warrant affidavit.

The 11 incidents occurred in parking garages in the 4500 block of Strutfield Lane, in a West End residential area full of apartment complexes. Police obtained numerous videos of the two suspects smashing vehicle windows and removing airbags. The suspects allegedly drove a black Honda Civic with Virginia tags and a distinctive chrome dual exhaust — a detail that led to their eventual arrest.

In early November, a license plate reader hit on a black Honda Civic with the same tags in connection to a possible airbag theft in D.C., police said in the search warrant affidavit. The responding officer also noted the dual exhaust system of the vehicle.

The suspects were arrested on Nov. 13 after allegedly smashing the windows of three vehicles and stealing airbags in the 2100 block of Columbia Pike in Arlington. The 43-year-old suspect posted bond and the 25-year-old is being held without bond.

According to the Arlington County Police Department:

Both suspects go to court for the offenses on Wednesday, Jan. 18.

A DoorDasher‘s car has not yet been recovered after being stolen in broad daylight during a home delivery in Old Town on Wednesday.

The incident occurred just after noon in front of a home in the 400 block of N. Alfred Street, near the intersection with Princess Street. The blue Toyota was stolen when the DoorDash driver left his car open and running while making a delivery.

The customer reported the incident on social media, and said that the car was stolen by suspects driving a dark four-door sedan missing a rear passenger side window. Photos of the vehicles were captured with a DoorCam.

“He dropped off the food and someone got in his car and took off with it,” the customer reported on social media.

Police provided no information on the incident, except to say that it remains under investigation.

“We sent everything to the police and to the poor DoorDasher,” the customer wrote. “Otherwise watch out this just happened.”

A Washington, D.C. man is in custody after an armed carjacking and eluding police in Alexandria’s West End on Friday morning (Dec. 16).

The incident occurred at around 10:30 a.m. in the 500 block of S. Van Dorn Street in the city’s Landmark area. Police said that the suspect brandished a handgun and that the 29-year-old male victim went to the hospital, but was not injured.

Donte Thomas, 32, was arrested about a mile away and charged with use of firearm while committing a robbery, buying/receiving a stolen firearm, eluding police, providing police with a false identification and failing to stop at the scene of an accident.

Thomas is being held without bond and goes to court on Jan. 23.

Notification:: There is a heavy police presence in the 500 block of South Van Dorn Street. This is in response to a robbery from person. The victim was transferred to the hospital with minor injuries. APD is on the scene and investigating. pic.twitter.com/v9RYI1YPal 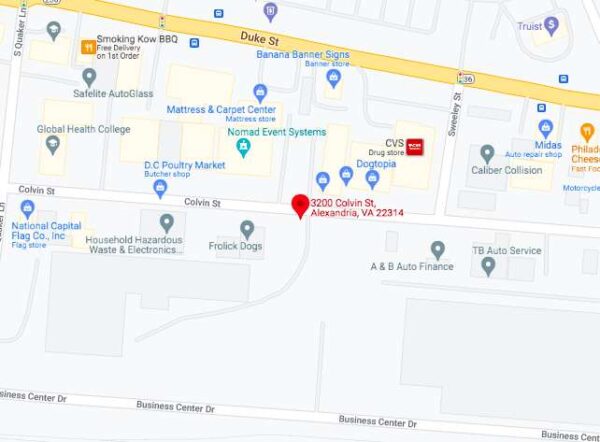 A Washington, D.C. man is behind bars after allegedly stealing a car from a lot in an industrial area of the city and fleeing from police.

The incident occurred shortly after 10 p.m. on Thursday, August 22. Police received a call that several people were moving vehicles in the fenced in parking lot of a car repair business in the 3200 block of Colvin Street.

Police arrived and saw the 22-year-old suspect allegedly climb a fence to the lot and get into a Dodge Ram with its lights on, according to a search warrant affidavit. When police made their presence known, the suspect allegedly ran on foot from the scene and was arrested a short distance away.

Another suspect stole a red Ford Mustang and was not arrested.

The suspect told police that “he received a key fob for the Dodge Ram from the unknown suspect operating the Mustang, whom he claimed not to know the identity of,” police said in the search warrant affidavit.

“The suspect was to drive the Dodge Ram ‘somewhere in Maryland,'” police said in the search warrant affidavit.

“I was told, texted, to go to a certain place,” the suspect allegedly told police.

The suspect was charged with failing to stop at the scene of an accident, fleeing from law enforcement and grand larceny. He released on recognizance and goes to court on September 28.

A 33-year-old Alexandria man is being held without bond after allegedly stealing thousands of dollars worth of vehicle parts in residential parking garages in Fairfax County and Fairfax City.

Drake, who is a multiple felon, was charged with grand larceny, eluding police, possession with intent to manufacture a schedule I/II substance, destruction of property possession of burglarious tools, and driving on a revoked license.

The first theft was reported on April 19 in the 5800 block of Trinity Parkway in Centreville.

“The victim went out to their vehicle earlier in the day and it wouldn’t start,” police said in a search warrant affidavit. “The victim saw that the hood of the car had been tampered with, and that he couldn’t close it properly. When he opened the hood, he found that his car batter was missing and that the wires to the vehicle’s horn were cut.”

Security footage showed two cars — a Nissan Murano and Jeep Cherokee — piggyback behind residents who drive into the secured parking garage. The suspects then parked on the fourth floor of the garage, parked and started pulling on door handles, according to a search warrant affidavit.

Three days later, on April 22, another person reported a theft from their vehicle in Fairfax County. Among the items stolen were a car battery, an air intake system and air filter — amounting to about $7,000 in damages, police said in the search warrant affidavit.

Then, on April 29, Fairfax County Police responded to the 4400 block of Market Commons Drive in the City of Fairfax after a man reported that his truck was broken into and that two handguns were stolen.

The suspect’s vehicle was soon spotted and the suspect was arrested. The Nissan Murano is being held as evidence by the Alexandria Police Department.

“During an interview after his arrest, Mr. Drake admitted to law enforcement officers that there were stolen items contained inside his vehicle,” police said in the search warrant affidavit.

Alexandria’s Part 1 crime rate is up, and it’s mostly due to an increase in larcenies and thefts from cars.

Police released the city’s Part 1 crime statistics for 2022 on Tuesday, and included are the reported numbers of homicides, rapes, robberies, grand larcenies from vehicles, and aggravated assaults.

Overall, crimes against people and property in the city are up 7%, when compared to the first five months of last year.

There has been one homicide in 2022 — a 25-year-old man who was found dead on the sidewalk in the West End in March. There were two homicides in the city in 2021 and four homicides in 2020.

DNA evidence has linked a stolen handgun left in a car to a 32-year-old Alexandria felon, who now faces upward of two years in prison.

The gun owner told police that he owned the gun for years, had not shot it in more than two years and did not allow anyone else to handle it, according to a search warrant affidavit.

More than six months later, on March 11, the Virginia Department of Forensic Science returned a certificate of analysis with a DNA profile of the suspect.

The suspect, who has more than 10 felony convictions, was arrested on April 11 — eight months after the gun was reported stolen. He was charged with petit larceny and possession of a firearm by a convicted felon. The latter charge carries a minimum sentence of two years in prison.

The suspect is being held without bond in the William G. Truesdale Adult Detention Center and goes to court on June 18.

A 20-year-old Washington D.C. man was arrested in Old Town earlier this month for carjacking an Uber driver and her customer.

Raphael G. Snead, Jr. was arrested at his grandmother’s house on March 3 by Alexandria Police in the 700 block of North Fayette Street. He was transferred on March 8 to Montgomery County, where he is currently being held without bond.

Snead is suspected of two carjackings — the first occurring on Feb. 7 at around 6:30 p.m. in the 8100 block of Fenton Street in Silver Spring. Snead allegedly pulled a gun on the victim in a parking lot, punched him in the jaw and drove away in his Honda CRV, according to a search warrant affidavit.

Three days later, on Feb. 10, a license plate reader alerted the Washington Metropolitan Police (MPD) of the stolen Honda, and MPD attempted to conduct a felony stop. Police pursued the suspect, who wrecked the car and fled on foot.

“The suspect ran to a 2014 Toyota Rav 4,” police said in the affidavit. “The vehicle was operating as an Uber and was occupied by a driver and a customer who was seated in the back seat and parked on Branch Avenue. The suspect jumped into the front passenger seat and began yelling at the driver to drive and forced the driver to get out of the car by punching her in the face several times with a closed fist. The suspect pushed the driver out of the vehicle and the back seat passenger was able to escape.”

Snead, who goes to court April 1, was charged with:

A 30-year-old Alexandria man held without bond in the city jail is wanted across the country for at stealing at least luxury vehicles with fake identifications around the country.

Serge Ahmed Zeba, a native of Burkina Faso, West Africa, was arrested in the parking lot of the Extended Stay Hotel in the Landmark area on Jan. 26, and was charged with possessing a fictitious identification or license, possession of a stolen vehicle, unauthorized use of a stolen vehicle and providing a false identity to law enforcement.

Zeba was living in the hotel and was driving a dark-colored BMW X6, which was allegedly stolen from a dealership in Savannah, Georgia, in 2020. He is accused of using phony cash orders to buy multiple luxury cars, including

“Mr. Zeba voluntarily provided a Delaware Driver’s License when asked for identification,” police said in a search warrant affidavit. “The name on the ID provided was James Dingwall… but the name could not be confirmed through the Department of Motor Vehicles.”

Zeba allegedly tried to flee from police by starting the car and putting it into drive, but it stalled and the engine shut down.

Inside the car, officers found multiple identifications that did not belong to Zeba, as well as “cash, checks and what appear to be tools to manufacture and print identifications and checks,” according to the affidavit.

Police then found several outstanding warrants against Zeba, who has since been charged in federal court with identity theft and wire fraud.

In addition to numerous failed attempts, Zeba is accused of stealing the following vehicles:

Overall, Alexandria’s Part 1 crime rate is down 9% compared to 2020, but it’s still 8% higher than 2019, according to recently released figures.

Police released the city’s Part 1 crime statistics for 2021, as of Dec. 7, and included are the reported numbers of homicides, rapes, robberies, auto thefts, larcenies, burglaries and aggravated assaults.

There have been two homicides so far this year — a woman killed earlier this month and the stabbing death of a man in September. Both incidents occurred in the West End of the City.

The below numbers are not finalized and are subject to change.