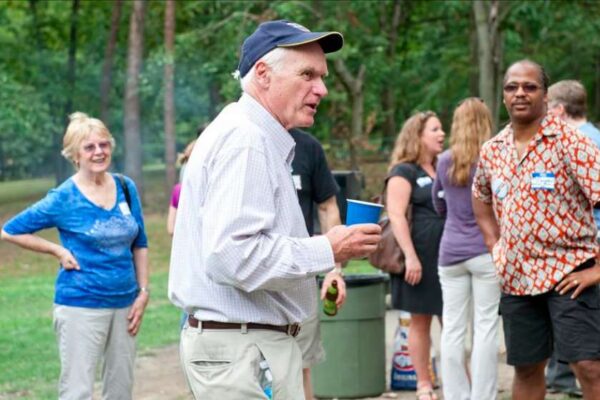 Former Alexandria Delegate Richard R.G. Hobson passed away at his home on Sunday, May 23.

Hobson’s family announced his death on social media on Monday. He was 89 years old.

“Dick Hobson set the gold-standard for service to our community,” Wilson said. “Over decades of service to our City, he never lost his commitment to our community and our people. He was so knowledgeable on so many topics. I left every conversation with him learning several new things, and his laughter was infectious. His family and close friends are in my thoughts. Thanks for sharing him with Alexandria.”

A familiar face in Alexandria politics for decades, Hobson retired as Alexandria’s Delegate for the 21st District after two terms in 1979 and spent the next several decades as a land use attorney with McGuire Woods.

“I never intended to make a career out of the House of Delegates,” he told the Washington Post, emphasizing that “I’m not going away” and promised to continue work in local politics “in finding and encouraging persons of integrity and ability to seek and hold public office.”

Born on July 28, 1931, in Orange, New Jersey, Hobson and his family moved to Alexandria in 1936, according to a biography written in Immanuel Church-on-the-Hill’s website. He was in the first graduating class of Douglas MacArthur Elementary School, and then attended George Washington Middle School and Episcopal High School. Hobson graduated from Princeton University and then served for three years as an officer in the U.S. Navy before getting his law degree from Harvard Law School.

In 1959, he met his wife, Kathleen Stanton, and they were married the following year. In 1962, he and his wife moved back to Alexandria. His career credits included stints as chairs of the Virginia Bar Association, the 8th Congressional District Committee and the Alexandria Democratic Committee (ADC).

In 2014, the ADC awarded Hobson with its lifetime achievement award.

ADC Chair Clarence Tong said that Hobson was a very dedicated, well-respected and valued member of the ADC family.

“His service spanned for over five decades, including representing Alexandria as a Member of the Virginia House of Delegates, and serving as a precinct leader and long-time Chair of the Resolutions Committee,” Tong said. “We will greatly miss Dick and offer our condolences to Kay and the entire Hobson family.”

Hobson is survived by his wife, Kay, and his children Rich Hobson, Hartley Hobson Wensing, Lee Hobson and Kathleen Hobson Davis and their children. Details of funeral services have not been released. 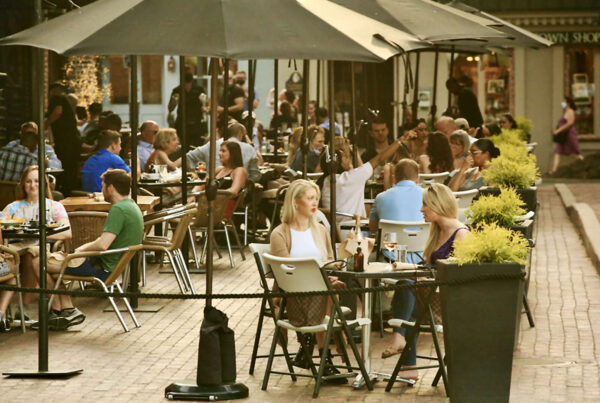 School Board vice chair condemns City Council elimination of School Resource Office program — “Without surveying the larger community, they made a decision that frankly their backgrounds don’t qualify them to understand the ramifications of their actions. It’s still puzzling, even after a 2.5-hour exchange by council, what problem council was trying to solve, as the SRO program has not only been highlighted to be a successful partnership, but also there was no evidence to suggest otherwise.” [Alex Times]

Investigative journalist Nick Horrock dies — “Perhaps the best example of his courage came in 1968 when he was trying to expose problems in the prison system. His head shaved, he went undercover as an inmate at the Maryland State Penitentiary. With only the warden and the governor aware of why he was truly there, there was no special protection from either the inmates or the guards. He survived unscathed, he wrote, he won accolades and prizes but he was awash in fear when he was doing it.” [Gazette]

Animal Welfare League ‘Cover the Cruiser’ event on Saturday in Del Ray — “Join us this Saturday from 10-2 to help us Cover the Cruiser! We’ll be out in front of The Dog Store in Del Ray along with @AlexandriaVAPD and @AlexVASheriff to cover their vehicles with donated pet supplies to help animals in need!” [Twitter]

Chamber ALX hosting City Council candidate meet-and-greet on June 1 — “The Alexandria Chamber of Commerce will gather members and friends for a “speed networking” type of event where Candidates for Alexandria City Council and Mayor will hop from virtual table to table to have micro conversations and targeted discussions with each group of attendees. Attendees will be seated by areas of interest to better focus the small group conversations.” [Chamber ALX]

New job: Entry level appointment setter — “We are hiring for individuals who have a background in either customer service, finance, or sales. If you are searching for a company that pays well, and takes care of all members, feel free to apply. We are looking to add 4 new members to our team. We fully train, so experience in our industry is not required. If you work hard and show that you are serious, we do have advancement opportunities. We truly care about helping our associates succeed and we have the tools.” [Indeed] 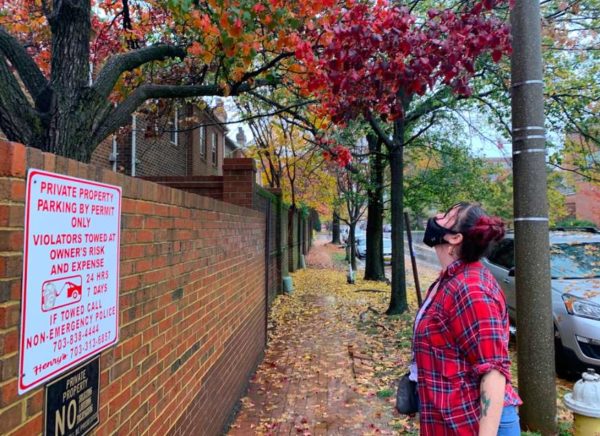 Via Volcán Coffee Roastery Opens in Old Town — “Although the global pandemic slowed them down, the McCauslands finally opened their store this month at 110 S. West St. (the former location of VIP Pet). They are excited to share their passion for coffee in a physical space.” [Alexandria Living Magazine]

How Will Small Businesses in Alexandria Survive? — “Amy Rutherford, the owner of Penny Press & Red Barn Mercantile, has been brainstorming since July for new ways to make the holidays simple and safe for her clients. This year, she is adding delivery, gift wrap, and gift boxes to her list of services.” [Local DMV]

Local Chef Dies from Brain Cancer — “An accomplished chef, Hugh and his wife Anne-Claire have owned and operated the award-winning Le Refuge Restaurant in Alexandria, Virginia since taking over the legendary operation from Anne-Claire’s family about 10 years ago.” [Zebra] 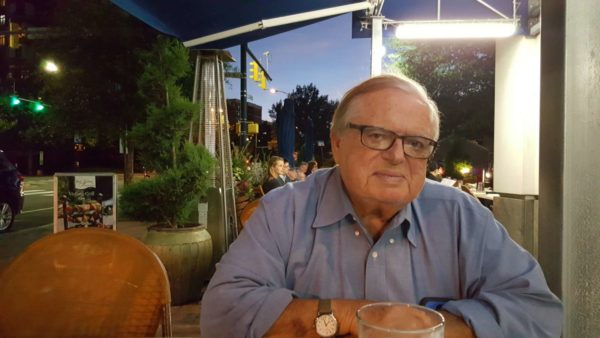 An Alexandria Living Legend and longtime advocate for public access to the waterfront died last Wednesday in his Old Town.

Engin Artemel served in the City of Alexandria Department of Planning for ten years and was Planning Director from 1997-1984. He was 81 years old.

“One of his most notable contributions to the City of Alexandria was the opening of the Alexandria waterfront to residents and the general public, planned through careful attention to historical precedent and in close collaboration with community leaders,” said his daughter, Deniz Artemel. “He also led the revitalization of lower King Street.”

According to his Living Legends profile, Artemel played a key role in the establishing which areas of the cohesive waterfront belonged to whom, and working on advocating on the city’s behalf for opening up public access to previously inaccessible portions of the waterfront.

Artemel’s vision is clear in the city’s Waterfront Plan, an ongoing process of establishing a walkable waterfront along the eastern edge of Old Town.

After serving as the planning director, Artemel founded Artemel International which exported his experience in urban planning — particularly on waterfronts — to the Middle East and the former Soviet Union.

Artemel was named a Living Legend of Alexandria in 2009. His funeral was officiated by former Mayor Bill Euille and Bud Hart at Ivy Hill Cemetery on June 19th.

Deniz Artemel said that in lieu of flowers, her father would have wanted to be remembered by taking a stroll and “enjoy his beloved Old Town Alexandria waterfront.” 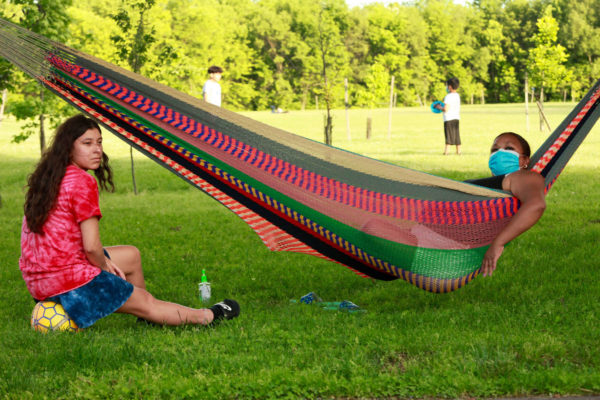 Developer Gets Financing to Build Apartments in West End — “Monday Properties announced Tuesday it secured a $66.8M construction loan from EagleBank and broke ground on the development at 2000 North Beauregard St. The project is planned to include 300 units in six to seven stories of wood-frame construction atop a two-level concrete podium. The apartments will be wrapped around an internal, 420-space parking garage.” [Bisnow]

Inova to Build Hospital, Considers Alexandria Campus Modernization — “The health system is also looking at options for ways to modernize the current Inova Alexandria Hospital — and noted that ‘all options, from renovating in place to relocation, are under evaluation. Additional information will be made available as this project develops.'” [Alexandria Living]

Beyer Calls Trump’s Vanity ‘Nauseating’ — “The day the United States hit 100,000 deaths from the COVID-19 pandemic Trump shares a messages calling himself ‘the greatest President in our history.’ His vanity is nauseating. He doesn’t care about you, your family, your health, or your safety. He only cares about himself.” [Twitter]

Local Lawyer and Musician Dies — “John Spaulding, 94, a traffic-law trial lawyer who also was a choir leader, musician and regular weekend pianist in the 1980s at the Fish Market Restaurant in Alexandria, Va., died April 5 at his home in Arlington, Va. The cause was congestive heart failure, said his wife, Polly Plumb deButts.” [Washington Post]

Student Collects 500+ Books for Middle Schoolers — “During the past few weeks, tenth grader Erin Machado and her mom have collected more than 500 middle school books from friends and neighbors, sanitized each one, and delivered them to Francis C. Hammond Middle School in Alexandria.” [Facebook]

‘The Garden’ in Del Ray is Not Reopening Outside — “We will take this time to continue to train staff with updated health department regulations as well as make the necessary updates to our business to ensure your safety upon reopening. We do have plans to incorporate take out from The Garden in the next couple of weeks. There will be new menu items, cocktails, growlers, and can beer to go. Please continue to follow us on social media and check out our website for further updates.” [Facebook]

New Job: Event and Promotions Assistant — “This firm identifies and develops new streams of revenue for clients through on-site promotions, innovative marketing strategies and advertising campaigns with a personal touch. This is an entry-level position with fully paid training and the opportunity for growth into an executive management role after completion of training program.” [Indeed] 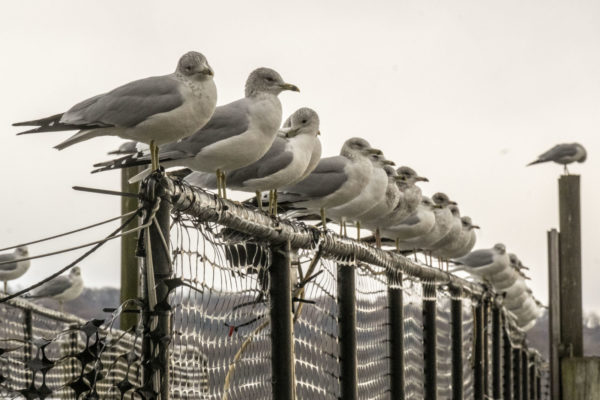 City Writes Off Thousands in Unpaid Taxes — “In the last decade, Alexandria has written off more than $100,000 in uncollected tax balances. The annual write-off happens every November, just as City Council members are appearing with a giant turkey at City Hall to celebrate Thanksgiving.” [Gazette Packet]

Obit for Alexandria Scientist — “In the course of her lifetime, physician and activist Janette Sherman gave voice to countless — and often voiceless — victims of environmental toxins. She died this year on Nov. 7, in Alexandria, at age 89.” [WAMU]

Local Woman Stuck in Apartment — “An Alexandria woman who uses a wheelchair says she’s been stuck in her apartment this Christmas week because her building’s only elevator is broken down. Ami Francisco contacted 7 On Your Side after she says the Mason at Van Dorn apartment complex didn’t take her concerns seriously enough.” [WJLA]

Electrical Fire Costly for Convergence Church — “On October 31, Lisa and her staff faced one of their biggest challenges when an underground fire caused widespread damage to the facility’s electrical system… Convergence will likely not reopen until February. And until issues between the insurance and utility companies are resolved, Convergence has been saddled with over $40,000 in repairs.” [Zebra]

Patch Editor Dies After Cancer Fight — “William ‘Skip’ Wood, of Alexandria, Virginia, died on Sunday, Oct. 6, after a battle with cancer. He was 57. A longtime journalist and Virginia resident, he covered parts of Northern Virginia for Patch over three years, and was well-known nationally for his reporting at USA Today.” [Patch]

NOVA Names New Prez — “Northern Virginia Community College has named its new president. Anne Kress, one of three finalists in a national search, has been selected to lead Virginia’s largest college as its sixth president, Virginia’s Community Colleges announced Wednesday. Her appointment takes effect at the beginning of next year.” [Washington Business Journal]

Fall Family Fest This Weekend — “Celebrate the change of seasons at the City of Alexandria’s annual Family Fall Festival on October 12, from 11 a.m. to 3 p.m. at Armistead L. Boothe Park (520 Cameron Station Blvd.). The festival is free, with activities that include scarecrow building, inflatables, pumpkin painting and entertainment. Food and beverages will be available for purchase.” [City of Alexandria]