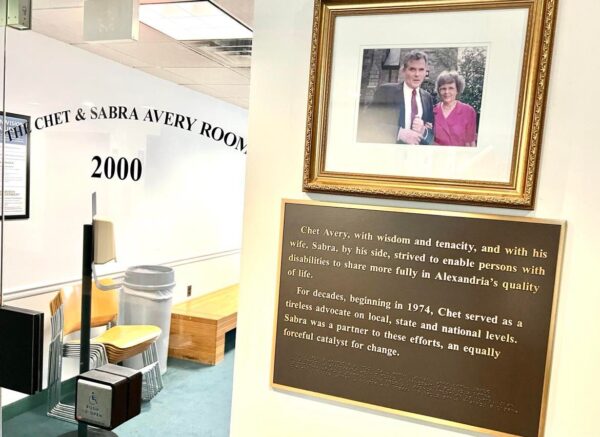 Chet Avery, a longtime community leader and educator who volunteered in Alexandria for decades, died at home on Thursday, September 8.

Avery, 85, was a lifelong advocate for disability justice and welfare. He lived in Alexandria with his wife, Sabra, for more than 50 years, and served on the Alexandria commission on Persons with Disabilities for 36 years and the city’s Human Rights Commission for more than 30 years.

“Chet was a tireless advocate for full inclusion of our disabled residents in both the Federal government as well as in Alexandria,” Mayor Justin Wilson said. “My thoughts are with Sabra and his entire family, with gratitude for his lifetime of service to our community.”

Avery was born in August 1, 1937, in Sanford, Maine, to florists Chester Sr. and Gladys Avery. He started losing vision in his left eye at the age of 16, and he went completely blind when he was 17. After losing his vision, he briefly attended a special school for the blind, and later returned to his old high school in Sanford and graduated as president of the class.

Avery received a degree in history from Harvard University in 1960. It was there, while studying to get his master’s degree in counseling and education, that he met his future wife, fellow Harvard student Sabra Allen. They married a year later, and in 1964, their son Bradford B. Avery was born. The family moved to the D.C. metropolitan area that same year when Avery got a job with the federal government.

Avery also served on nearly 25 different boards, commissions, committees, councils and workgroups in Alexandria, “including the Special Education Advisory Committee for the Alexandria Public Schools, the Alexandria Human Rights Commission, the Virginia State Rehabilitation Council, the Virginia Assistive Technology System Advisory Council, and the Washington Ear,” according to a 2010 proclamation for “Chet and Sabra Avery Day.” That same year he was named a Living Legend of Alexandria and The Chet and Sabra Avery Room was dedicated at City Hall.

A lover of books, film and television, Avery was instrumental in developing audio descriptions for plays, informational tours and movies. He was a member of the Audio Description Advisory Committee of the National Captioning Institute and the Consumer Advisory Group of the WGBH Media Access Group

Avery is survived by his wife, son and two granddaughters.

There is no service planned at this time, and well-wishers are asked to remember Avery on his memorial page.

END_OF_DOCUMENT_TOKEN_TO_BE_REPLACED

More Stories
Police: Mental health crisis at U.S. Patent and Trademark Office resolved peacefullyAsk McEnearney: Whose advice should I listen to about the real estate market?