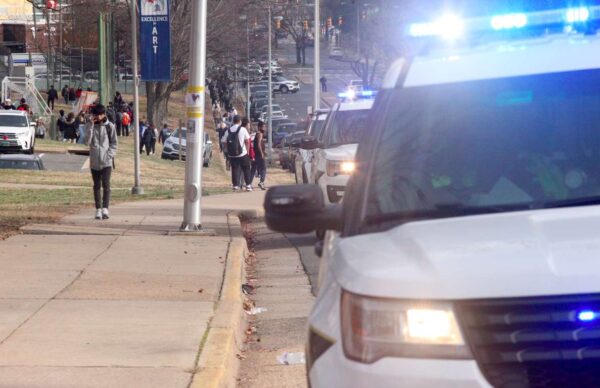 Consequently, ACPS is considering enhancing the role of its school resource officers to not only serve as law enforcement but as teachers and informal counselors.

Interim Superintendent Melanie Kay-Wyatt will use the report by Hanover Research and recommendations from an advisory group to present a plan next month. The plan will focus on a reimagined partnership with the ACPS and the Alexandria Police Department’s school resource officer program.

The new arrangement has been months in the making — including 18 discussion group meetings — and will go into effect at the end of this school year in June.

Hanover is recommending the “triad” concept; a method of policing backed by the National Association of School Resource Officers where SROs serve as law enforcers, teachers, and informal counselors.

“In effective SRO programs, SROs fulfill educational and counseling functions in addition to providing law enforcement services,” Hanover said. “Discussion group participants suggest that intimidation and opposition to SROs can be overcome through community-building activities such as classroom visits or athletic events.”

SROs have been a contentious issue in Alexandria. The officers were defunded by the City Council in last year’s budget, and ACPS spent the first few months of the 2021-2022 school year without them. They were returned after ACPS pleaded to Council for their return after multiple incidents with weapons in schools.

“I feel safe from outside threats,” a Black student at Alexandria City High School’s Minnie Howard campus said in a report. “But within our hallways, we have a lot of fights that break out randomly throughout the day, and I just don’t want to be caught up in that.”

There were 46 students arrested and 68 injured in the 2021-2022 school year, with 194 incidents that provoked a police response, according to an ACPS safety report.

The school system is using the 2021-2022 school year as a baseline for future improvement.

“Students also identify drug use as a major concern and express substantial discomfort with drug sales and use in bathrooms,” the report said. “Staff express concern about a perceived lack of follow-up actions to address student violence.”

Between October and November, Hanover Research conducted 18 focus groups with 142 participants, in addition to garnering feedback from more than 5,200 people in the survey.

“Most non-staff members don’t even know how to contact the SROs at the schools,” Marriam Ewaida of Hanover Research told the Board. “The ones that have interacted with the SROs actually have largely positive perceptions with their interactions, but some of them…  describe the SROs as being sometimes intimidating or distance in their limited interactions. Most respondents did not see the SRO as an informal mentor or educator.”

The survey also found that: